I'd bad experience with Groupon food purchases before, you know; shoddy food, smaller portions, burnt powdered soup (yes, and that was from Segafredo Gurney Plaza which has closed down!), but non as BAD as the one I'm going to blog about. This is so bad that it warrants a blog post for it, because I was fuming the whole time I was dining there!

I'd dined in Waka before and enjoyed its quality buffet spread about 6-7 yrs ago when it was in Rasa Sayang Hotel before Rasa Sayang was closed for renovation. That was one of the best Japanese buffet I had then.
So I was pretty keen when I saw this 33% Off Japanese Sunday Buffet Lunch Waka Restaurant. Usually I would only buy deals which is at least 50% off, but since I'd a pretty good experience before, I didn't mind paying RM45 for it. We bought 4 pax.

We made a reservation for it 2 weeks before and when we reached there at the stated time of 11.30am, the door was still closed. (Buffet time was from 11.30am-2.30pm)
We saw quite a number of people seated at the chairs outside the restaurant. All were waiting for Waka to open its doors. About 10 mins later, they opened their door, and we still needed to queue inside the restaurant while submitting our vouchers and also to get our table number. Looks like most of the patrons there were using the Groupon vouchers.

The restaurant was full, and there were about 100 people seated inside.
And by the time we were seated (and we were not the last in queue), when hubby, my sis and aunt walked towards the buffet line, half of the food were gone! I was still seated because I was keeping an eye on Shern and Khye.

Firstly, the buffet line was short. There were not much varieties and thus not many food choices available. Secondly, food that were finished were not being replenished quickly.
So people were standing in front of the buffet line waiting for food!

And when they finally replenished a certain dish, the portion was so small I nearly laughed out loud. The waiter came out with 2 plates of sushis, and in each plate there were only eight pieces of sushi.
SIXTEEN MISERABLE PIECES of sushi to feed 100 hungry mouths. Of course each person took more than 1 piece, and after 3 or 4 people, the plate became empty again and nothing left for the rest of the people queuing.

I wasn't exaggerating when I said the buffet line is empty. Look at these photos: 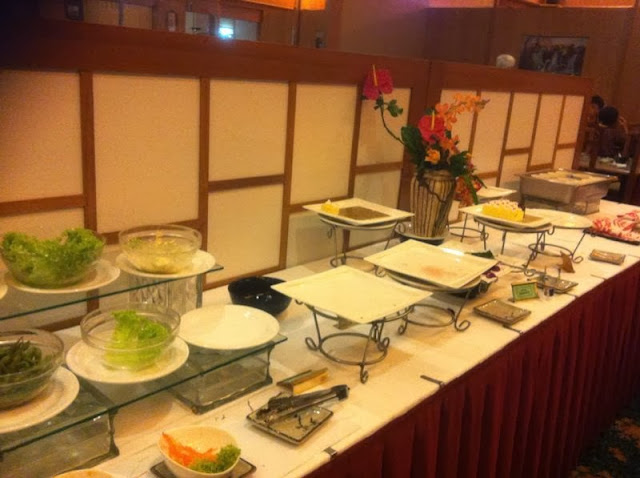 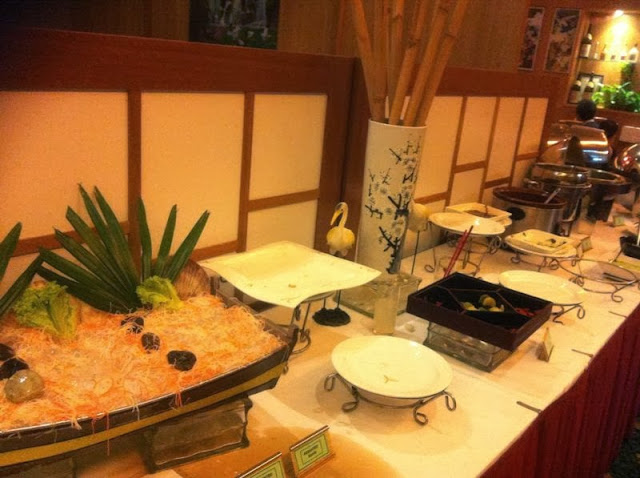 And as the replenishment was so slow and measly, this led to people fighting for food. Because if you don't fight for it, you get nothing.
We saw my son's pediatrician dining there too and he was not fighting for food. He was merely letting the people there taking it as he stood at the side quietly. I guess being a doctor, he wouldn't want to be caught fighting for food like us. But because of that, he ended up not tasting any sashimi until the very end.
So it was either fight for food, or just eat the tasteless fried rice, or go hungry.

Hubby calls it "Waka Hunger Games".
It may seem funny but is so true, to a certain extent.

We complained to someone who looked like a lady supervisor, but she couldn't do anything as EVERYONE in the restaurant was also complaining. And oh ya, they are lack of staff. About 5 staffs serving customers for the whole lot of about 100 of us. And the staff don't even speak English. Go figure it out yourself our frustration.

At one point, they were even out of Shoyu sauce, and chopsticks and wasabi. Asked them to replenish them but they didn't. Really crazy. At that time, I nearly choked on my food fuming, just that there weren't any food for me to choke on.

However, to be fair, at about 2pm, guests started leaving. I guess they just stuffed themselves full with the plain fried rice so that they won't go hungry.
Some food at the buffet line were starting to get filled then without people queuing up fighting for the food.
We also left the place then as we were just too tired and angry to eat anymore.

I came back home and just wanted release my frustration. Searched online for Waka Restaurant and found no website. Blabbed it all on facebook and wanted to tag Waka there too but found none to tag. I guess Waka Restaurant is invisible on the internet?
Anyway, I tagged Groupon Malaysia and also submitted a complain form to them. (ok, will blog more about this in a separate post) 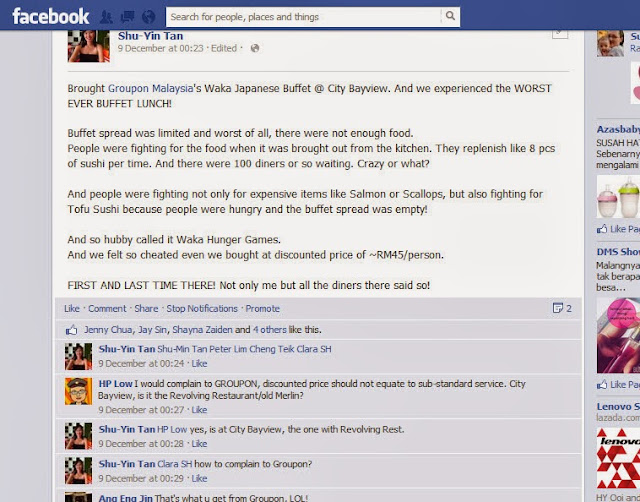 Anyway, I feel the need to blog about my experience with Waka Restaurant Penang because I felt so cheated! And I hope none of you reading my blog will be cheated like me.

And as for me and my family, we will never step foot into this restaurant ever again!

Email ThisBlogThis!Share to TwitterShare to FacebookShare to Pinterest
Labels: Eats

i think you should also report it to the consumer association of Penang..because this one sounds like a cheating case..

Was planning to buy cz salmons caught my attention. Luckily didn't buy at last, thx for your sharing

What a terrible experience. Replenishing 8 sushis at a time is really pathetic. I think you are right to flag this to Groupon and warn others not to waste their money

Thank you for sharing your dining experience at Waka Japanese Restaurant with us. I almost wanted to go there this weekend after looking at the mouthwatering array of food on Groupon. Your comment has saved me from a disappointing evening of dining out at Waka.

hcworld, I'd reported it to City Bayview Hotel and Groupon Malaysia.

Hie Apple, my hubby had to practically fight for a few pcs of salmon for me.

Hie Serene, it is really too disappointing. And I felt so cheated I had to blog about this.

Hie Anonymous,
I'm so glad you did some googling before purchasing, so that you won't end up like me! ;)

Actually, I am posting this to say that this restaurant has improved a lot. I bought a Groupon for my family to enjoy a Jap lunch at Mother's day and we are pleased with the attentive service and food. The food is fresh and reasonably tasty. There is enough food for everyone!!!
Buffet is buffet, home cook food is home cook while Michelin is Michelin. Stay cool.

Your blog- Worst Ever Buffet @ Waka Japanese Restaurant, City Bayview Hotel Penang is the funniest and honest blog I ever read.Thumb up and thanks for the advised! :)

Wish you have a good day.