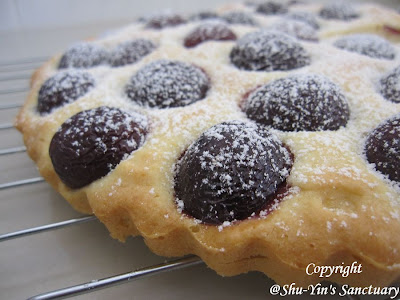 12 August 2011 - Maria's Cherry Cake
I baked this cake beginning of August and nearly forgotten all about it. The reason is because it is one of those bakes that does not taste as good as it looks.

First of all, maybe because I used only 1 punnet of cherries and it is not enough. Secondly, it may be because I used this tart pan and thus results in the sides being too crisp for my liking. Or it can be due to my oven which gets too hot although it has not browned yet, or simply because it was due to my own noob-ness in baking.

All in all, I find the texture of this cake a little too dry and also lack of the juiciness of the cherries (because I was too cheapo and used only 1 punnet). When I tasted the cake a day later, the texture was even more dry. Sigh. When compared to the Cherry Cake I made more than a year ago, this one is a far cry from it.

I was looking forward to a fluffy kinda texture with juicy cherries in my every bite. :P

But all in all, it is still edible of course, if you don't mind the lack of cherries, and rather dry texture. So let me tell you this, if you want to try out this recipe, please remember to at least double the amount of cherries used, with half of the cherries folded into the batter! :)

This is my batter topped with cherries cut into halves with seed removed, before it went into the oven. 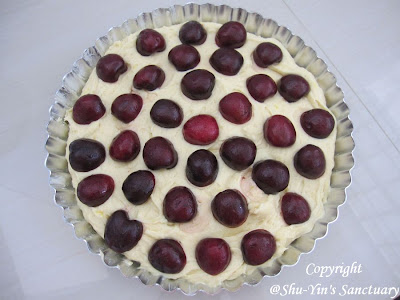 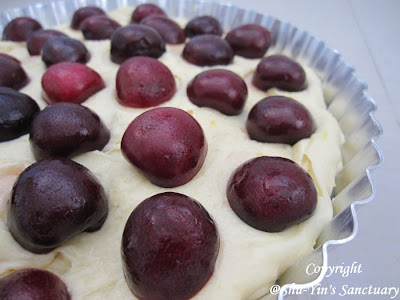 See, the cake was not even that browned yet, and yet the sides were already a 'lil too crisp for my liking. Or are all cakes using tart pan end up like this? 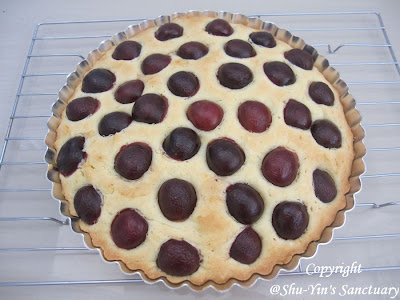 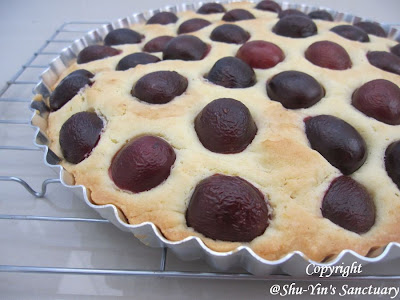 After baking, the cherries were all wrinkly but still juicy. 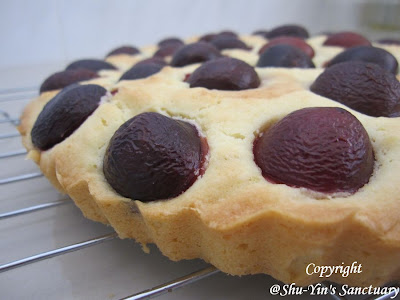 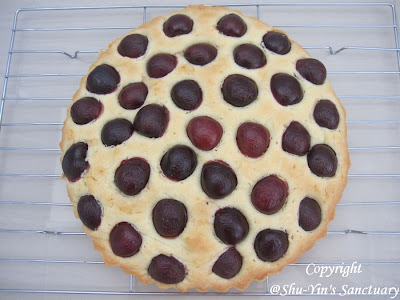 I sprinkled some icing sugar on top. 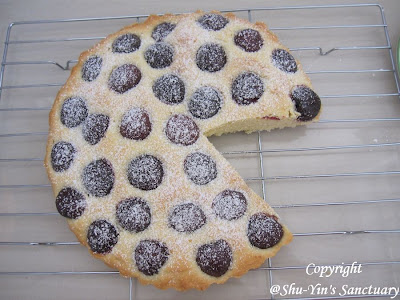 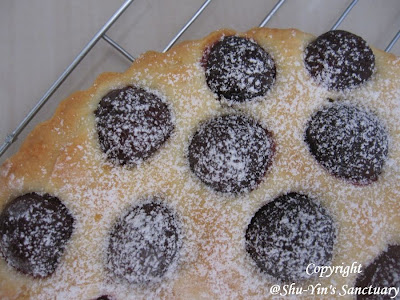 See...only the top part had cherries. If there were cherries in the middle part, it would taste so much better! 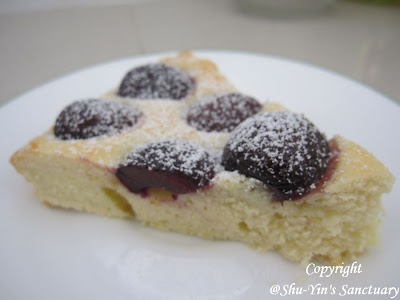 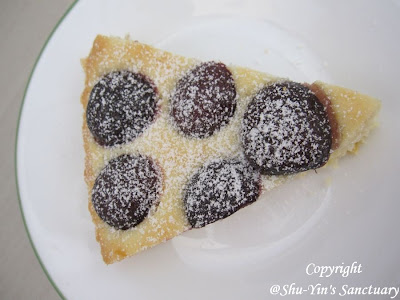 1. Preheat oven to 150(fan)/170C. Prepare a 9 inch pan. Line the base and grease the sides.
2. Cream butter and icing sugar until light and fluffy.
3. Beat in eggs gradually.
4. Add in vanilla and lemon zest.
5. Sift flour with baking powder and fold into the beaten butter.
6. Spread out the mixture onto prepared pan and arrange halved cherries. No need to press in.
7. Bake for 35 minutes or until golden. When cake has cooled, dust with icing sugar before serving.
Posted by tanshuyin at 10/01/2011 09:11:00 PM

Oh, I'm so sorry to hear about this.
Frankly.. very frankly.
I mistyped the flour amount, only realising it after some draft searching. Because the recipe came in decilitres, so I converted the recipe and straightaway drafted it into Blogger, but... I forgot about it, and when I wanted to post it, I couldn't find it, instead made a new conversion from the book, of which.... had more flour than the one I actually made.
Few weeks after I posted this, another reader complained that the cake was dry, I was scratching my head, why dry? Only then I found the original drafted recipe, which contained.. 50gm less flour.
I'm so sorry for this cake, it's all due to me. Sorry.

Next time buy you another punnet of cherries to make up for this ;p
Serious, If I get to meet you and if it's cherry season. Ok. Promise.

And very frankly it has never happened before because usually I draft in MS word(immediately after baking/cooking) then copy it into blogger when I want to post it, but just don't know why that day I itchy itchy went to draft in Blogger and forgot about it. Trust the other recipes, LOL. don't lose trust in me.

This recipe that you copied is the rectified recipe.

Oh...so the recipe shd have 50g less flour? That is like removing 1/3 of the flour required. No wonder the end results is so dry.

Haha. I find it hilarious now that I know it is the 'flour problem' and not that im such a baking noob that i cant even follow a recipe.

Anyway, dont worry. Not your fault entirely. I myself juz followed the rectified recipe blindly.

And dont worry, Im still a big fan of your recipes.
For now, usually i like to bake using your recipes or Little Teochew's.
More home-based and not those US-version which tends to be too sweet for my liking.
And also I tend to be more simple. Dont really like too much frosting on my bakes (love choc ganache though), so im not into cupcakes deco for now coz they are just nice to see, but not nice to eat!

That is y i like ur style and Little Teochew's!

Anyway, cant wait to meet u during cherry season! WAKAKAKAKA!

But then when u meet me, u may think im such a noob. Coz actually im nowhere near u in terms of baking n cooking.
All I know is just to follow a great recipe and my cakes will sure turn out great! Hahaha.

No, I mean, this version u copied on ur blog is the correct one.
I've rectified my mistake.

Yeah, do hope to see u during Cherry Season, PROMISE!