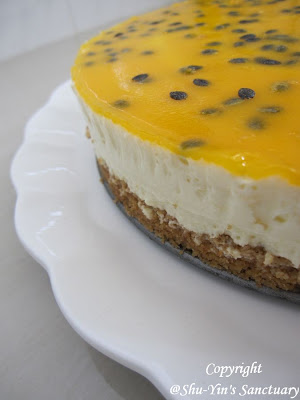 This time around, I was more hardworking and I strained the juice.
Heck, it was really difficult to strain as much juice as possible from 4 medium-sized passionfruits. In the end, I liked what I did. I has just enough juice and my passionfruit jelly layer was more clear and pretty.

After a night of refrigerating, I took the cake out. 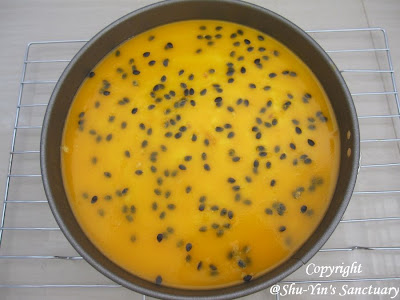 Unmoulded it and this is what I've got - 3 layers of contrast colours; brown, white and bright yellow. Lovely. 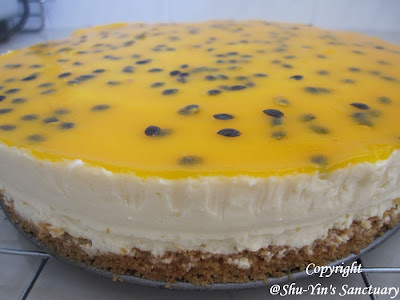 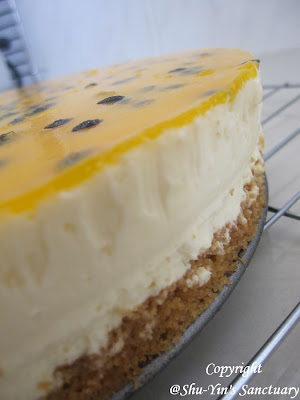 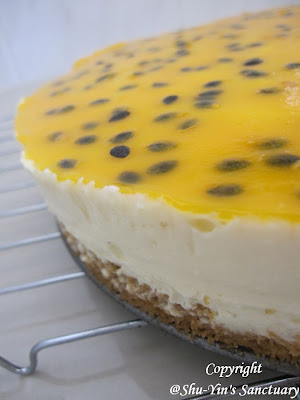 I love biscuit layers in cheesecake. Wouldn't trade the base for something else. Not until I find something I love more than biscuit base.

The cheesecake layer was sweet and a 'lil to soft. But I guess I was too impatient to cut into the cake. The remaining cake left in the fridge was given more time to toughen up and it was harder when I cut into it many hours later. 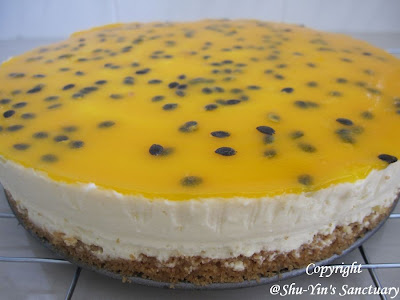 I love my serving plate as well. Slightly scalloped edges. Pretty and feminine enough for a beautiful cheesecake. 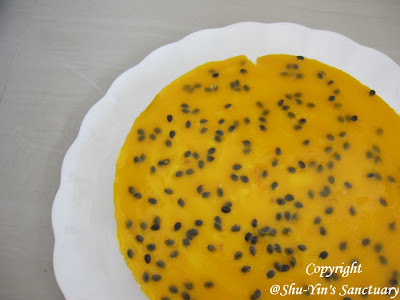 A nice clean cut into the cake. 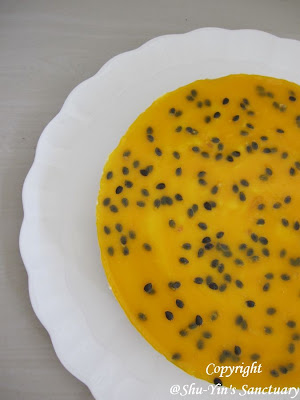 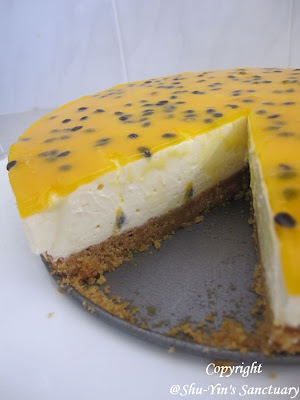 My slice. A generous slice. All mine. :D 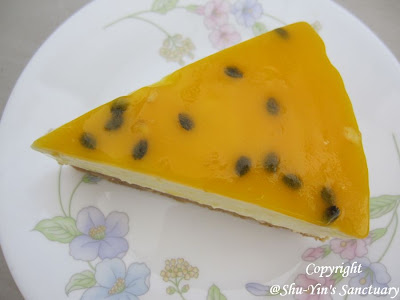 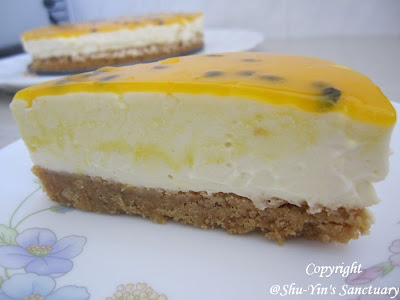 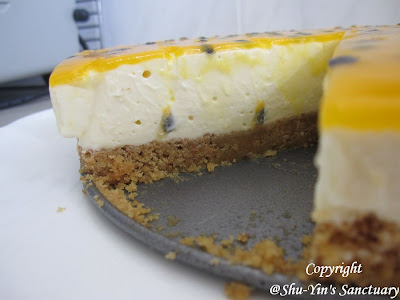 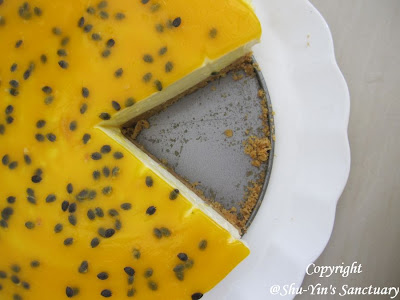 For the biscuit base:

For the yogurt cheesecake:

For the passionfruit jelly:

For the biscuit base:

1. Preheat the oven to 180’C. Butter an 8 inch cake tin/ramekins/tart tins. If using a ring line the bottom with aluminum foil and place on a baking tray. (I used a 8 inch round spring form pan)

2. Put the digestive crumbs in a bowl, and add the sugar, ground ginger and salt to it. Mix well.

3. Add the melted butter to the crumb mixture, and mix until combined. Transfer the mixture to the prepared tin/ramekin and press it down in an even layer. Bake until golden (takes approx 10 minutes – this may differ according to the size of your tin) and let it cool completely.

For the yogurt cheesecake:

4. Put the yogurt and the passion fruit juice in a food processor and mix until smooth. (I used a blender)

5. Put the heavy cream in a small saucepan and heat until warm to the touch. Add the powdered gelatine to the warmed cream, and stir until dissolved. Remove from the heat and set aside.

6. Put the softened cream cheese, sugar, and vanilla extract in the bowl of a stand mixer, and beat until fluffy.

8. Pour the cheesecake mixture into the crust, and refrigerate until set. This will take at least 6 hours.

For the passionfruit jelly layer:

9. Strain the passionfruit juice and place in a small saucepan over low heat.

10. Add the powdered gelatin and stir until dissolved. Remove from the heat and let it cool.

11. Meanwhile rinse some of the passion-fruit seeds and place on top of the set cheesecake.

12. Pour the passionfruit mixture on top, and refrigerate for at least one hour/until set.

I am expecting a slice of whatever you are baking when I hit town!!!! =) Reading about them too much just makes me want to sink my teeth into any one of your baking creations!

if im baking and there are still bakes left i'll sure bring a piece for u to try :)