USA: Cathedral of the Saint Mary of the Assumption - San Francisco, California - 8 May 2011 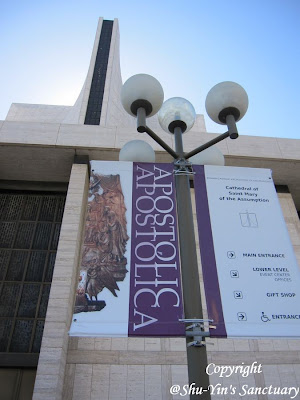 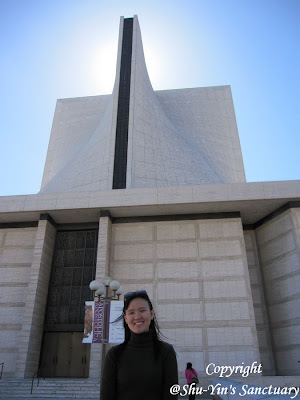 This church was very different from the other churches -

Firstly, the church was considered controversial not only because of its adherence to the changes in worship from the Vatican Council, but also because of the grandiose scale of the structure. Its supporters argued that it is a magnificent homage to God, but dissenters argued that the funds should have instead been usedto help needy parishioners and instead of erecting this extravagant edifice.

Secondly, the task of building the new cathedral was daunting; San Francisco is earthquake-prone, requiring seismically engineered buildings. The structure is an engineering tour de force. Standing prominently on its hillside site, the hyperbolic paraboloid form is visible from all over the city of San Francisco and truly manifests the modern version of the Gothic cathedrals in Medieval Europe.

The emphatic ascension consists of a square base topped by four hyperbolic paraboloids, thin concrete shells that slope inward and support each other while, from above, forming a giant cross. The structure meets in a cruciform-shaped void overhead. So when you actually look up the ceiling, you will see a giant cross.

This is the entrance leading up to the main door. Such intricate carvings.
And look at the strong wind, making my hair covering my face. Yes, this is normal in the SFO area. 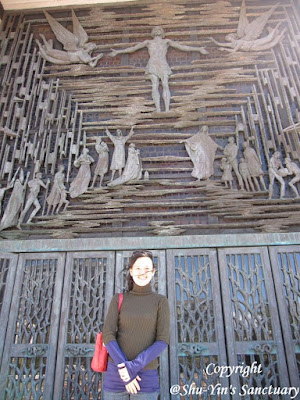 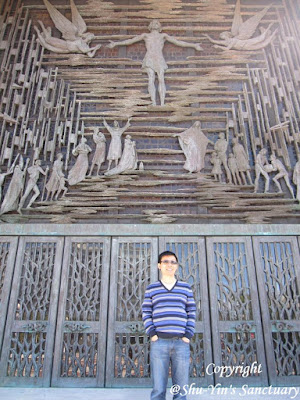 Love the door so much couldn't help but took another picture with it. 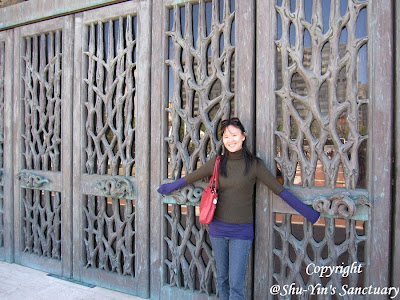 Once inside the main hall, this is what you see. There was actually a service going on. So we were not allowed to go to the front of the hall until the service is over. But other than that, we were free to walk about, quietly of course. 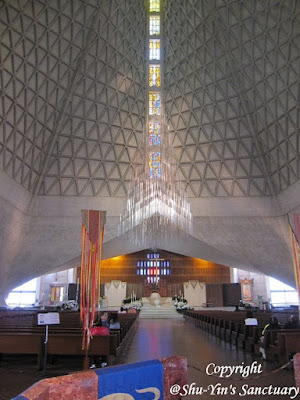 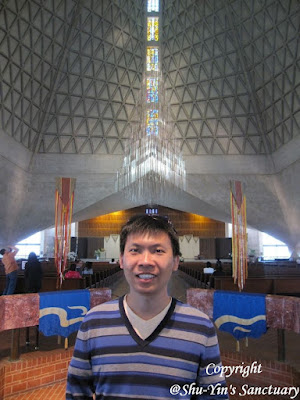 When I looked up the ceiling looking for that giant cross, I was in awe. It was so beautiful. I could see the light from the colourful stained glasses which formed the giant cross rom the lofty ceiling. And the place was so quiet and tranquil, it made me feeling calm.

This faceted glass was designed by Professor Gregory Kepes of MIT. The blue glass in the north represents water; the gold and yellow of the south represents the sun and light; the red of the west window represents fire and the green of the east – the Earth. 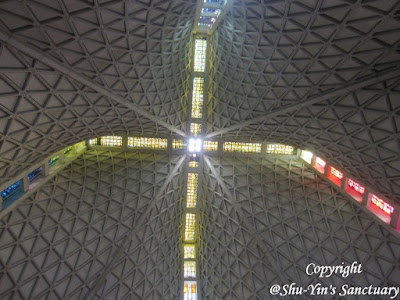 On the sides of the halls were intricate carvings of Jesus Christ, Mother Mary and other angels I suppose. They were all very delicate and beautiful. 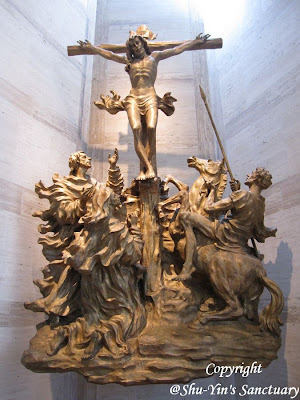 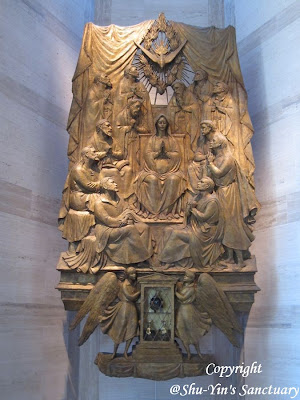 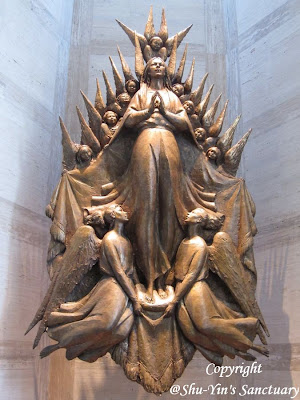 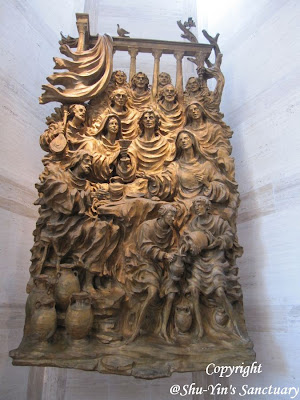 The giant chandelier than hung down in the middle of the hall was beautiful too. 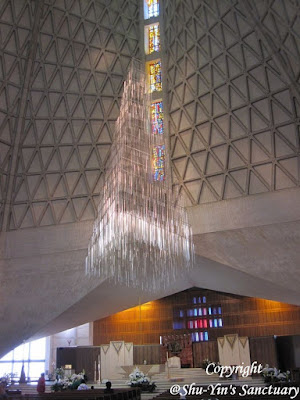 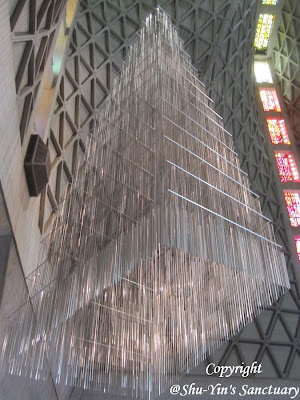 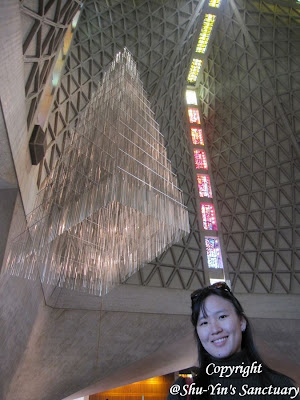 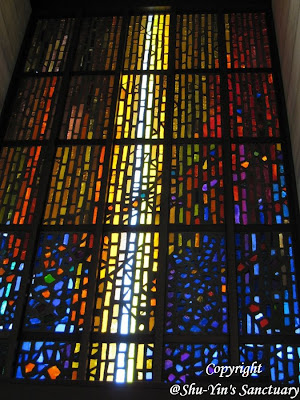 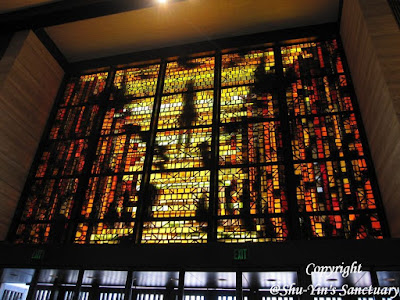 At one side of the hall, there is this big pipe organ, which is the first one I've ever seen. I've never seen a pipe organ before, have you? Heard that this pipe organ here was built in 1971 by Fratelli Ruffatti, a famous organ bulder in Padua, Italy. It has 4842 pipes on 89 ranks and 69 stops. 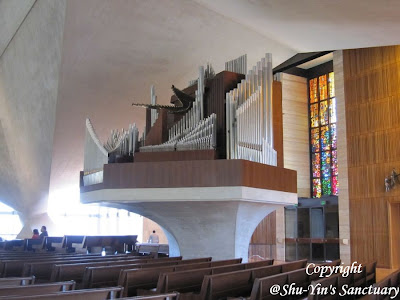 After awhile, we walked out quietly. And we took some photos outside the cathedral. Love the blue skies in SFO. 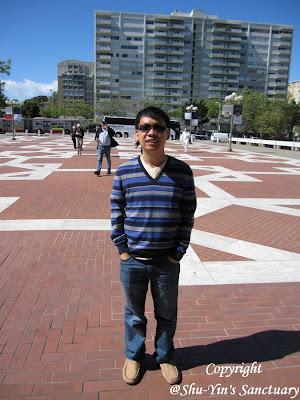 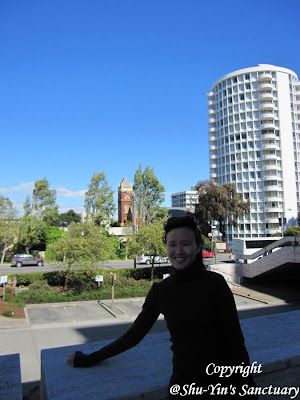