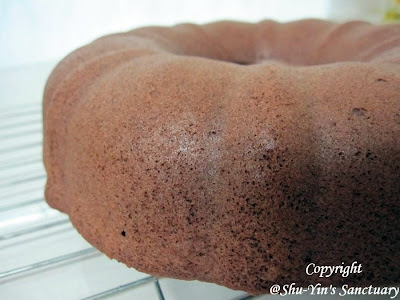 Pillsbury's Moist Supreme Chocolate Cake - 16 August 2011
My friend passed me a box of cake premix that was going to expire in 5 days. She asked me to bake it and not waste it, so I said OK because I couldn't bear to see it gone to waste. 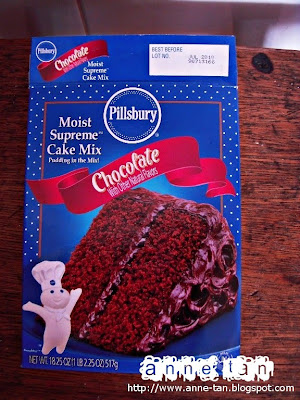 The box says "Pillsbury Moist Supreme Chocolate Cake". Sounds good.
I have not baked any cake using premix before so I was reading intently behind the box for instructions.

They only called for 3 ingredients to be added into the mix: Eggs, Water and Oil.
I was a bit dubious because I have never baked a cake which calls for water. Most calls for milk, buttermilk or yogurt for the liquid content.
And also this calls for oil instead of butter. Hmmm...

After an hour or so, the cake was out from the oven.
So how was it?

It was a midnight bake and you know chocolate cakes do not photograph well, so please bear with me the ugly photos with low lighting and my bad photography skills.

This is what it looked like fresh from the oven after removing it from my bundt pan. 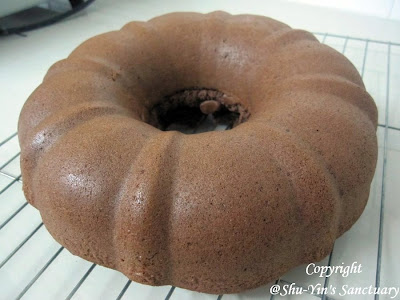 It was my first time using my cheapo bundt pan, and I was disappointed with the 'curves'. The curves were not so significant and thus the cake was not so beautiful. And the colour of the cake was not impressive - too light for my liking because to me, light colour means less chocolate-y taste. 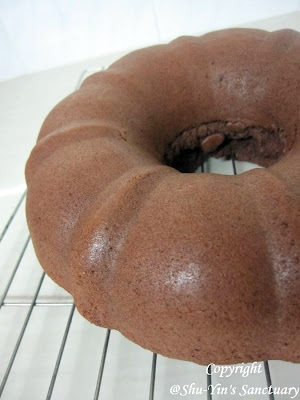 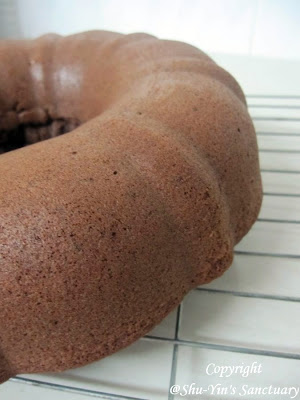 But when I cut into it, I was a little happy because it shows a darker brown in colour, a hope of a more chocolate-y taste.
You could also see that the texture was good. Looks good anyway. 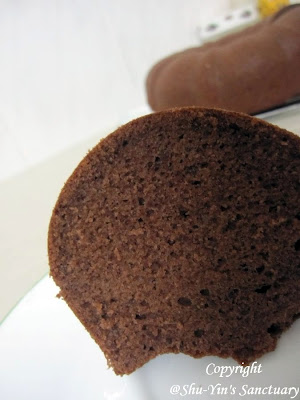 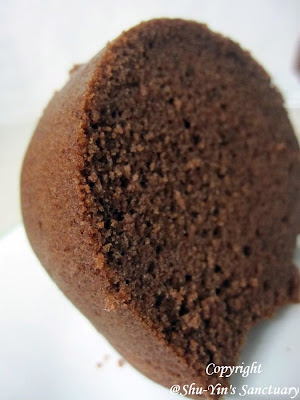 But when I finally took my first bite of that cake, everything went down the drain.
There was no chocolate taste in it at all. It was just a bland cake which was chocolate in colour. No oomph heavenly butter cake taste as well. Nothing.
Bland and dead and fake!

It was such a turn-off after my first bite. I was struggling to finish my slice.
In the end, I opened my bottle of Nutella Spread and slabbed some on my slice so that it finally has some real chocolate-y taste in it!

The only good thing about this cake is the texture. The texture of this cake turned out ok. Rather moist and fine crumbed. 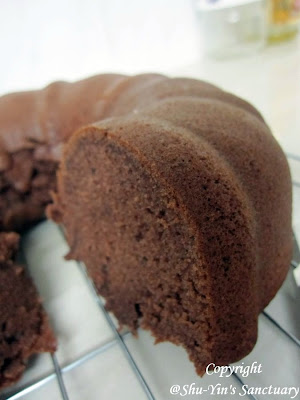 The next morning, I took the cake the cake over to mum's place for everyone to try it out. Everyone ended up eating their slices with Nutella as well.

And needless to say, we did not finish the cake. After everyone had their first slice, nobody went for a second slice. Sigh. So a small part of the cake ended up in the rubbish bin a few days later.
As much as I hate wasting food, I really couldn't finish up the remaining cake.

Then, I told my family this "Now only you all know how nice are my cakes. You wouldn't appreciate my cakes so much if you have not tasted this" =)

After this, I told myself never, ever bake using a premix ever again. Not even a branded one like Pillsbury. Lesson learned.
Posted by tanshuyin at 10/05/2011 11:29:00 PM