Now that Shern is 13 months old, I have less restrictions on Shern's food. In fact, Shern eats everything. But his main 2 meals is still moi/porridge.

However, in between his two main meals, Shern snacks a lot. Below are two of Shern's favourite snacks - Cheerios and Rice Krispies.
Although Shern has only got 8 front teeth - 4 top & 4 bottom, he can snacks on these cereals. I noticed that he sucks them 'til they soften and then swallow. I guess so, since he has got no back teeth to chew on.

Shern loves the Cheerios more, maybe because of the size. Cheerios is made from corn, oats, rice and wheat. This Multi Cheerios provides eight essential minerals, plus iron and calcium. I like the fact that it is not as sweet as other cereals, such as Nestle's Honey Stars, etc. 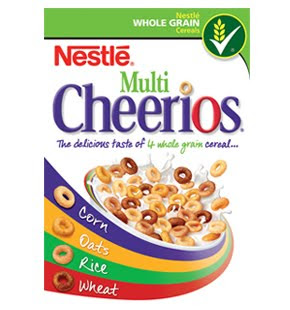 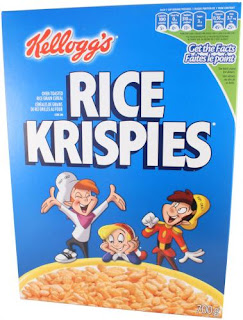 Nestle's Cheerios & Kellogg's Rice Krispies
Giving Shern the chance to snack using his fingers, rather than I feed him all the time is good. I see that he learns how to grip the small Cheerios/Rice Krispies better. He learns how to pick up the food using his thumb and index finger. And it is also a challenge to him how to put them in his mouth, because sometimes the food kinda 'stuck' to his fingers.

Below 2 photos are of Shern snacking on Cheerios & Rice Krispies. 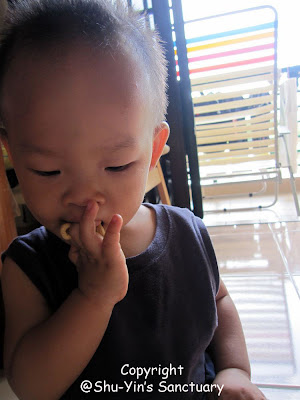 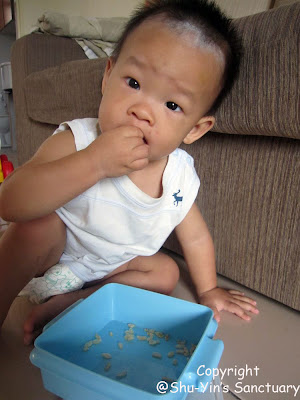 And not to forget that Shern often gets to snack on my bakes - cakes, bread, tarts, etc. This left photo below shows Shern snacking on the Mini Chocolate Muffins I baked earlier this month. Look at his mouth - so chocolate-y cute! :P 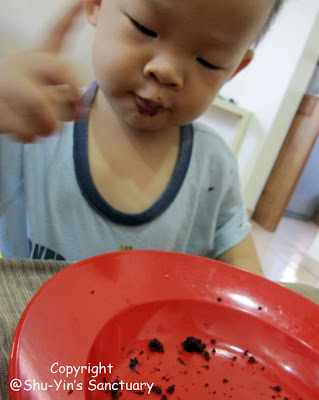 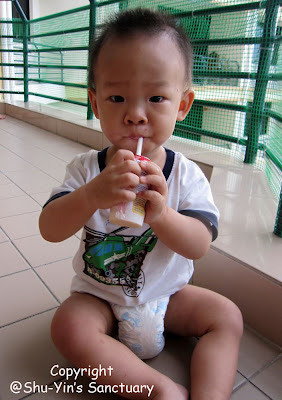 8 July 2010 - Shern snacking on homemade Mini Chocolate Muffins
16 July 2010 - Shern drinking the whole Yakult all by himself
Well, I am glad that Shern is not a food-picker for now. He gobbles almost everything I give him (except for formula milk...sigh!).

I believe in letting Shern try and enjoy a wide spread of different flavours and textures. Everything should be given in moderate. A little sugar once in a while does no harm! :)
And every child needs some sugar to make him a sugary sweet pie. :D
Posted by tanshuyin at 7/26/2010 09:41:00 PM

Caris loves Cheerios. I think they are pretty healty compared to biscuits and manageable size. She loves Yakult too.. i think all parents can invest in Yakult shares. hahaha.

karen...yalor. but i will continue to give him formula milk in hope that he will 'acquire' the taste :)

Julia...yes. pretty healthy compared to the rest.
That was what my husband said too. Too bad Yakult shares is not being listed in Msia. :)