Proud Mummy of a 13 Month Old

Shern is 13 months, 2 weeks and 5 days old today. I just realized that it has been quite awhile since his last monthly updates. Well, I suddenly feel like updating Shern's CURRENT achievement.

What can I say? I'm a proud mummy. And I find all his antics and gestures all a huge milestone :)

As of today, Shern can:

- walk quite well now - about 20-30 steps, although not that stable yet.
- only say 1 recognized word, which is "mum mum" which means 'eat' in baby language.
- wave his hand for 'bye-bye'.
- thump his hand on his chest to show 'scared-scared'.
- shows 'Good' with his index finger up instead of his thumb.
- look up the ceiling and point to the fan when I ask him 'Where is the fan?'
- sometimes can identify the 'clock' in our house as well.
- twist his wrist from left to right indicating 'No more' whenever his favourite VCD ends, or when his food is finished.
- clap his hands when you sing 'If you're happy and you know it clap your hands'.
- dance by bending his knees/shaking his butt when there is music, preferable music with beat.
- point to 'daddy', 'mummy', 'yee-yee', 'yee-pho', 'kong-kong', 'pho-pho' when we ask for them.
- look up in the sky/out the window when we ask 'Where is the bird?'
- whenever he catch hold of a ball, his instinct is to throw the ball onto the floor.
- whenever kong-kong turned on the ESPN channel to watch soccer, Shern will lift his leg up in the air to kick the imaginary ball.
- loves his books and can point to pictures of the books such as 'flowers', 'dog', 'ball', 'bird'.
- loves cars and always push/wheels them on the floor.
- feed himself when given finger foods such as pieces of bread or Cheerios.
- still refuses to hold his milk bottle. 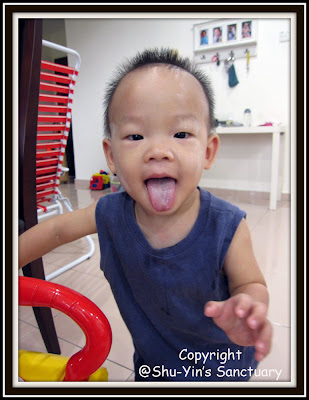 Shern is kicking imaginery ball already? He must be envisioning himself as the next David Beckham. :)

K2...haha. shit, im gonna have a victoria as a daughter-in-law? hehe