Saw this in Wendy's blog and decided to try it out.
And my end results do not look as appetizing as her's. My decoration skills sucks I know.

But the taste of it is so good that I made this twice in the same week.
It's a shame that blueberries are expensive here, although I noticed that the price has been coming down. However, I still bought mine at RM 9.90 for 125g which makes this yogurt ice-cream an expensive desert.

Hubby who doesn't go near yogurt says this yogurt ice cream is nice and ate a few slices of them :) 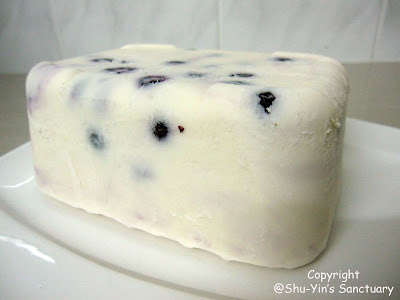 Yogurt ice cream on a plate without the drizzle topping YET 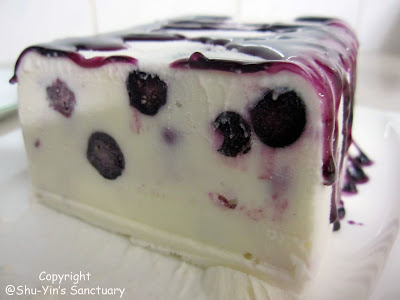 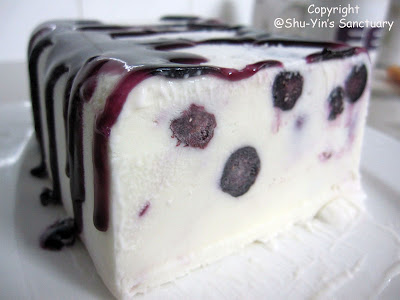 Drizzled the top with blueberry syrup 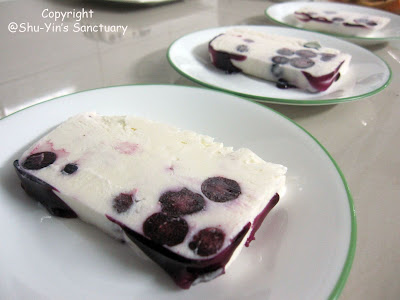 (A)
100gm blueberries
2 Tbsp water
1 Tbsp sugar (I used icing sugar)
Cook these in a saucepan over medium low heat until you can see the water turning into a blue colour. Do not stir, only swirl the pan with the handle. Remove from heat. Let it cool.

(B)
1tsp gelatin
2 Tbsp water
Place water in a microwave safe or heatproof bowl. Sprinkle gelatin over water. Let it sit for 5 minutes.
Either microwave on high for 20 seconds or double boil until gelatin melts. Set aside to cool.

1. Chill mixing bowl in the freezer for 5 minutes.
2. Remove from freezer and pour in cold whipping cream.
3. Beat on low for 1 minute then raise the speed gradually to high and whip until it is almost soft peaks. Put in sugar gradually and whip until soft peaks.
4. With the mixer on, pour in the cooled gelatin mixture (B) and mix until incorporated.
5. With a spatula or spoon, mix in the yogurt. Mix well.
6. Put only the blueberries (A) into the ice cream mixture. Leave the syrup behind and keep it chilled until time of use.
7. Fold the ice cream twice, not too much, you want the ripple effect. Take care not to break the blueberries.
8. Pour ice cream into a 1L capacity loaf tin. (I used a disposable freezer Tupperware ) Freeze until hardened.
9. When it’s almost time to serve, sprinkle 1/3 tsp of gelatin into reserved blueberry syrup and let it sit for 5 minutes. Microwave on high for 20 seconds. Let it cool down.
10. Unmould ice cream onto a chilled serving platter. Drizzle blueberry syrup over ice cream loaf.
11. Slice ice cream to serve. Do not use a scoop.

Hey... this looks really nice. I love yogurt ice-cream. Too bad I'm too lazy to make it myself. :)

W/o the blueberry sauce topping, it will not look pretty, so dress it up with the sauce.
Maybe also because the freezing container you used is a bit short lor.. so, there's less length for you to drizzle the sauce on, and it also caused you to think it looks less pretty.

Anyway, it's pretty nice to me and I'm glad you made your non yogurt eating hubby ate few slices. You can try with strawberries too, if you want. Cooking will release the colour from strawberries too. Prettily red.

Oh BTW...
Is this container you used disposable freezer tupperware?
Freezermates (I recognize the shape of the base) can use and throw?
New product?

mindy...this recipe is very easy. just that you need to whip the whipping cream a little long til my hand is tired coz i use a hand mixer.
u shd try this out. it is delicious and im sure even though yh doesnt like sweet things, he wont mind icecream? :)

wendy...yes, i dont have the correct size pan to put the icecream in, so i used my Tupperware..
Oopps....it is the green freezer Tupperware. not disposable one. Oopss...why did i disposable? sorry. error.
Btw, i love ur blog. U make such great food with such great photos. It makes my mouth water everytime I visit ur blog. :)

it looks delicious rite? well, it tasted delicious too :D