Shern Is ALL WELL Again

My little baby is now all smiling and crawling and 'super-the-active' again!
Yes, no more fever. No more cough. No more flu.

We came back from the hospital on Monday evening. Actually, Shern was still having the occasional fever then but I requested from the doctor to have him discharged, promising that I will monitor his fever at home.

I was really exhausted taking care of a whiny and clingy Shern 24/7 in a 2-bedded hospital room. And since Shern was not on drips or anything, I reckoned I could take care of him myself back at home. So I requested to have Shern discharged.

Well, since we went home, Shern slept better and was happier. But he was still having fever every ~12hourly. And Shern started to sneeze and cough. It was then that I really understood the term 'runny nose'. Shern's mucous kept flowing non-stop. And his cough kept him awake at night.

After a day or so, he became better and is now back to his bubbly self! :D 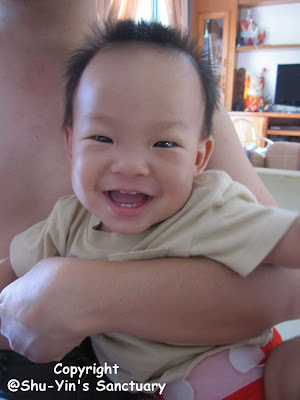 p/s - Thanks to all those who pray for Shern's speedy recovery. ;)