I had dinner appointment with friends on Sunday night. It was raining rather heavily an hour before and Shern was still sleeping. I was afraid that Shern's nap and the rain might delay us. Knew from experience that it just wouldn't do to wake up a sleeping child. Thankfully, Shern woke up on time and the rain stopped when we were about to leave the house.

Dinner was at No Eyed Deer in Prima Tanjung. Did not make any reservation and thus indoor dining with aircond was full. So we had no choice but to sit outside without aircond. I was afraid that our humid weather would make Shern sweat and be cranky later.

But it was an airy night. Thanks to the rain earlier. And Shern behaved really well too. He sat in the baby chair while playing some toys I brought for him. I fed him his broth and he finished them. Gave him a biscuit to nibble while he entertained himself.

It was really an enjoyable dinner.

Both hubby and I got to eat our dinner in peace and relaxation. No need to take turns to carry him while the other gobbled up dinner asap. 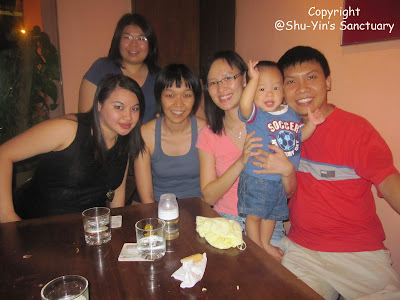 Thanks Shern for being so angelic.

Thanks for the pic :)

I do hop by once a while..and my blog is dead. Just created it for commenting purposes. Used to have Xanga way back when blogging was still new.

oohhh. i also blogged in 2003 when i was in Aus. then stopped for some time and now blogging again. is fun!