I'm starting to see his 'patterns'. He basically just drinks, sleep, & cry every day. On his good mood days, he will open his eyes and look around quietly for like half an hour.

His jaundice level has gone down, hopefully down to zero. He has mild rashes on his groin. Dr. Dan said most probably due to our humid weather and his rubbing his legs against the tender skins. 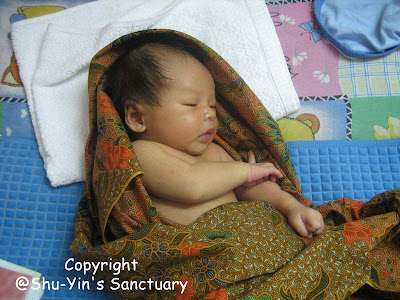 Yiu-Shern busy scratching himself. He refuses to wear mittens. He pulls them out after 5 mins. 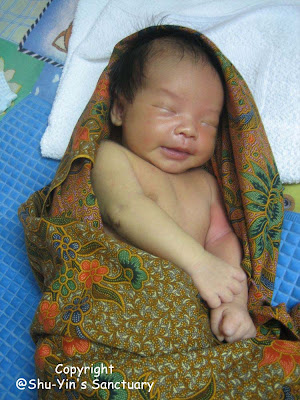 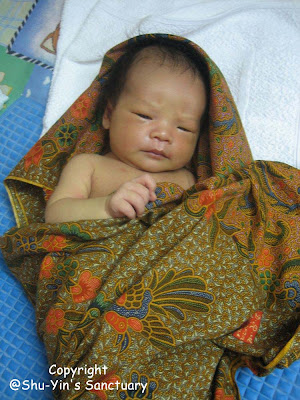 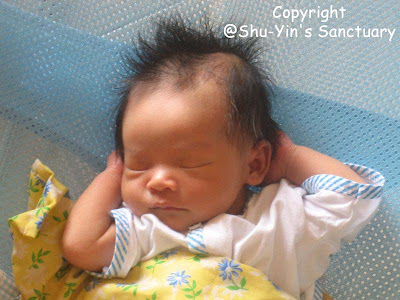 Yiu-Shern's favourite pose. He likes to sleep this way....the 'Sun-bathing' pose.
So how is mummy doing?

Good news first. Dr. Eric said my uterus is contracting nicely. Lochia is getting less and less.
B/feeding is now better - not so much engorgement. Just tiring that I am waking up every 2 hours to direct feed Yiu-Shern. He is currently still on exclusive b/milk.

Bad news. I have inflammation on my c-sec wound. The stitches were still intact, thank God.
He gave me oral antibiotic initially. But the pain became worse...I had throbbing pain on my wound. Dr. Eric then gave me antibiotic jabs which must be taken 3 days in a row.

Normally, I'm OK with injections. Just that they never can seem to find my veins. I was poked 4 times before he managed to inject the antibiotic inside me. Arghhh....

Dr. Eric also used a needle to make a hole in the wound and then pressed out discharge/stale blood from inside. I need to go back to the hospital for this for the next few days. And not to forget more antibiotic jabs... :(
Posted by tanshuyin at 6/18/2009 05:57:00 PM

shu-yin, i just realized, baby yiu-shern looks really mature! he sure looks like a big boy. :) and a smart one too! he gives me the feeling of being a smart boy when he grows up. :P

but i hope u get better soon... :( not all nice to get inflammation and all. must have been horrible. take good care. i'll see u next week! :)

i also hope i'll get better soon. it really hurts la when doing dressing and also the antibiotic shots!

When I had my surgery, my wound got a little infected too. But after i took out the stiches, it healed very fast after that.

oohh..my stitches are those need not remove type wan wor...

yiu-shern really looked like peter in his photos from the day he was born, but now he looks like you. i've heard this about other babies before... at birth looking like one parent, but aft few days look like the other parent instead!

for those who believe in sleeping poses indicative of personality, the way yiu-shern likes to sleep is interesting...

hope your wound is better now. continue to keep us informed. *hugs

shuey...yiu-shern looks like me? hehe..im so happy! anyway yeah..babies change their looks every day. so we wont know yet i guess.

the sun-bathing sleeping position is his favourite but then he alwiz 'terkejut-ed' this way coz his hands are now being swaddled.

Baby love to sleep this way. Jaden too and yes very easily terkejut.