A Weekend of 2 Weddings


Look at this cool dude. Can't believe he is my son. How much he has grown!

We attending wedding dinners 2 days in a row this weekend.

One is my best friend's Bee Shin's wedding. Took both my kiddos there. Both kids were dressed smartly. Shern was happy to see his friend Jaden there, so he had a happy time playing with him for the few hours.
But Khye was not doing so well. At 8 mths+, he started facing stranger anxiety and was a tearing up when people he doesn't recognize started talking to him. He was ok initially, but I guess there were just too many people there trying to 'cubit' his chubby cheeks!
And with the loud music, and his bed time, he was just cranky. I didn't really see him smile at all the whole night, which is so rare, because he is really a smiley happy baby. But he was not so that night. He was just a bulldog baby! lol.

So the following night, we left Khye at home for mum, while I just brought Shern to hubby's friend's wedding. Shern insisted on wearing his shades and was posing for me at the car park.
I didn't ask him to pose for me. He was posing for me all by himself. 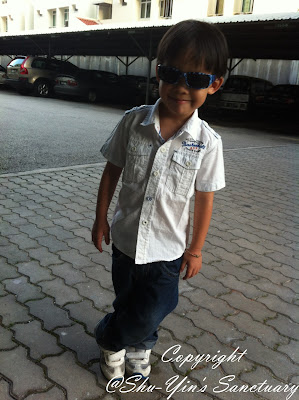 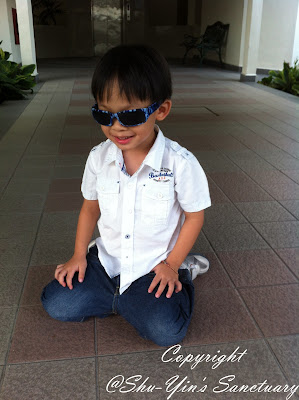 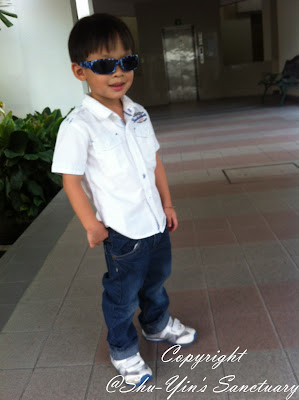 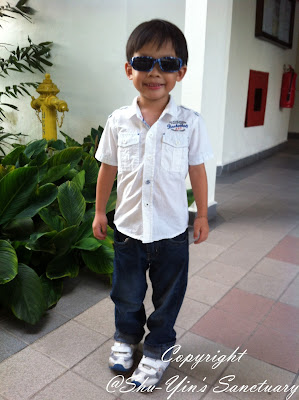 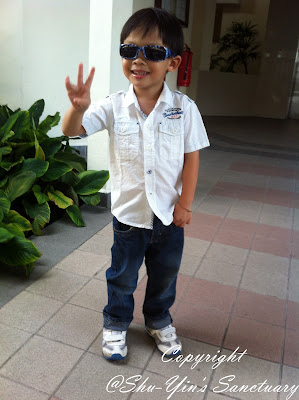 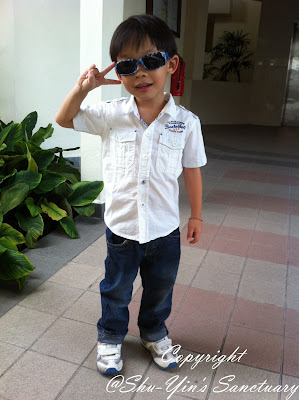 When we reached E&O, Shern was telling me, look at the beautiful sky. This is not the first time he told me that. He mentioned it once in a while when he caught the sunset from our home balcony.
This son of mine is really appreciative of nature. ;) 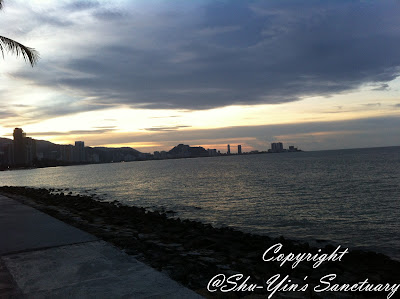 And not just that. I wore a dress for the dinner. I seldom wear dress now because it is impossible to breastfeed Khye. As I did not bring Khye to this E&O dinner, I wore a dress there. And Shern said "what a pretty dress. Please hold your dress and curtsy, while I bow". And then he bowed to me like a gentleman! Wow...! So sweet of him.

I took some photos of him with the lovely view. 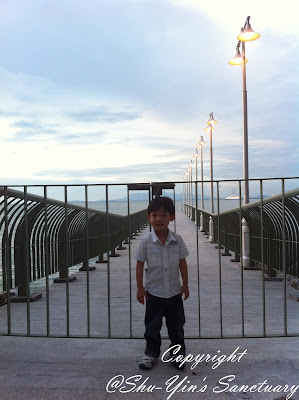 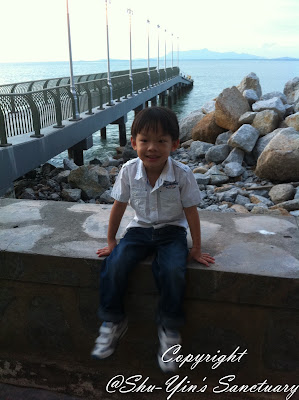 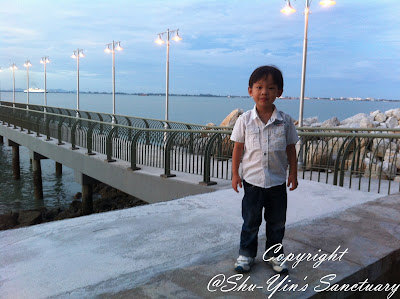 Shern has reaches an age where it is easy to bring him out for wedding dinners. I bring along some blank papers for him to write and draw, and an activity book which he loves. He actually completed 6 pages of the book before he went to play with the girl sitting at our table.

I actually brought the ipad along too on both nights, but I didn't want to bring it out until the last resort. And I'm thankful the ipad stayed in my handbag on both nights!

But Khye was not so happy at home. My sis whatsapp-ed me and told me Khye has this 'bull dog face' the whole time at home with them. He had this pitiful face and turned his mouth upside down and ready to cry. This is not the case if I leave him during the day. But I guess Khye just wants mummy at night. Sigh. So we left the dinner after we finished the prawn dish. After we reached home and I nursed Khye, he was a happy baby once again! Haha.

Shern on the other hand was happy on both nights because he got to play with his friends.And on both nights, Shern KO-ed the minute his head touched his pillow.