Just came back from Maple Palace Restaurant to celebrate Dad's Godma's 80th Birthday. It has been years since I last stepped foot inside it and I totally forgot how nice the restaurant is. Looks rather grand too.
Shern had a great time there playing with the helium balloons and running around with his 'new found friends'!

Min managed to take some very nice photos of Shern and us. Posted them on Instagram and then I thought it would be nice to share the photos here in my blog as well.

While waiting for the arrival of other guests, Shern finished the peanuts and the small piece of on his table. And after the first two dishes, he declared himself  'full already' and started to ask come down from his high chair.

He managed to get some helium balloons to entertain himself and he was all smiles playing with the random uncles and aunties there. Look at his cheeky face while posing with his balloons.

And this is Shern posing with his signature smile - showing all his teeth and ends up with small eyes! He was holding his monkey bag, which is actually his diaper bag nowadays. Yes, I don't need to lug a big diaper bag for Shern now that he is older. All I needed is to bring his water bottle, a change of clothes (just in case!) and some biscuits and snacks to entertain him in case he gets cranky!

Love these 2 photos of the 3 of us!
Very happy faces! 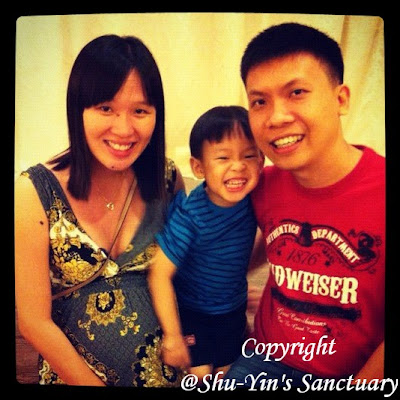 Reached home almost 11pm and Shern straightaway changed into his PJs and asked for his milk. He then fell asleep almost immediately without brushing his teeth! Hehe.
Posted by tanshuyin at 8/25/2012 01:13:00 AM

Email ThisBlogThis!Share to TwitterShare to FacebookShare to Pinterest
Labels: 3 of Us, Birthdays, Lim Yiu-Shern