At the last minute, my cousins gave us free tickets to Disney On Ice. We did not purchase the tickets because we think that Shern is too young to be able to sit through the whole session. And the tickets don't come cheap too.

But since we got free tickets, no harm trying. Those tickets were for the 2.30pm show. Straightaway I knew it would be a problem because that is Shern's nap time. So I got prepared and let Shern sleep a little later the night before, hoping that he he would wake up later, and thus won't take his nap so early. But I was so wrong!
Although Shern slept at 11pm+, he woke up at 8am on the day of the show. Oh oh...I'm sure by 2.30pm, he would be sleepy and cranky.

We went to McD for breakfast and then let him played there for an hour or so. And by noon, I told Shern to have a nap. He really fell asleep. He slept for 1 hour and then it was time to scoop him to the car for the show. Traffic was bad so it took us almost 1 hour to reach there.

Shern was happy and pretty excited because I told him he would see Mickey Mouse and Gang once we reached there. The show just started when we walked into the stadium. Shern was excited and kept pointing to Mickey Mouse. And what's more, he even swayed his body to the music!

This is the only photo I took. I didn't want to keep on taking photos because me too wanted to enjoy the show. 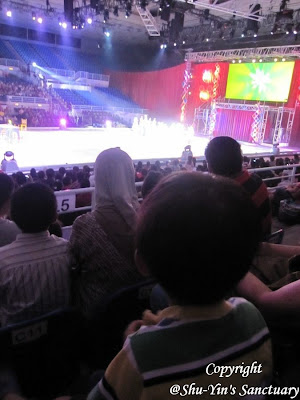 Disney On Ice @ Pisa - 11 March 2012
It was good to see him happy. About half an hour, Shern started fidgeting. I was glad I was well prepared. I brought many snacks in so that Shern would be happy. I gave Shern a packet of mini pretzels, which he happily munched on. When other characters came out which he is not familiar, he kept on asking me 'Where is Mickey Mouse and Donald Duck?'. I told him they went to change clothes.

He could recognize Mickey, Minnie, Donald, Daisy, Goofy, Pluto, Captain Hook, Cinderella, erm...that's about all. So I guess he got pretty bored when Snow White and Tinkerbell and the others came out.
And 5 minutes to 1 hour, which is the break time, Shern asked Daddy to carry him to the back of the stadium.

But after the break, Shern came back to his seat and asked for another snack. I gave him peanuts and it lasted him for the next 45 minutes 'til the end of the show. So overall, he was a good boy who did not make much fuss, but he was definitely too young to sit through the whole show without any snacks! Haha

So how was the show? Well, I didn't enjoy it as much as the previous one which I attended a few years ago. But it was still a good show nonetheless.

And oh, those super expensive Disney merchandise were selling like hot cakes. I'm so glad Shern is still too young to ask me to buy this and that. He just waved to the toys and said bye-bye. Phew... :)
Posted by tanshuyin at 3/13/2012 09:47:00 PM

chiaoju...the one i went to a few yrs back was all about the 6 princesses wan. smtg like dat. i enjoyed it more coz i know all of the characters. and mebbe coz im a girl. haha;)

and i watched the beauty and the beast musical in KL before. it was good. but Lion King in Spore was the best. really spectacular! u shd go watch it.

and ppl say wicked is good. hope i get a chance to watch it someday.