Ah-Ma Taking Out Ants From The Ears

Ok, this is not what happened. But that was what we told Shern! Haha.
He didn't want me to touch his ears. So it has been 2 1/2 years of accumulated shit inside his ears.
But one day when we went back to Ah-Ma's house, my MIL told Shern that inside his ears, there were ants and she needed to take them out. And surprisingly, Shern obliged!
So with a small torchlight in her mouth, Ah-Ma successfully digged out some of those dirt inside his ears.
Shern looked a little constipated here. Haha. Maybe it's the feeling of first time his ears being invaded and it felt funny. But nonetheless, I'm so glad it went OK. 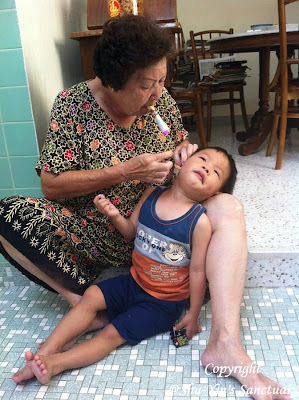 3 January 2011
2 weeks later, Ah-Ma tried again and it worked again! But this time he took my handphone and didn't want to let go. Ah-Ma mentioned that not much dirt inside anymore. 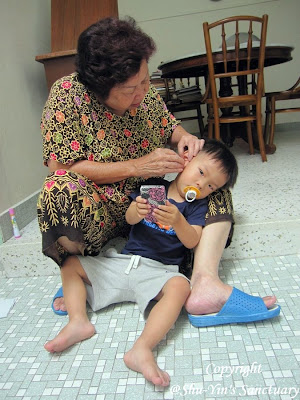 15 January 2011
And 2 months later, just a few days ago we went back again and Shern was still a good boy and let Ah-Ma 'took out ants' from his ears. And Ah-Ma said no more dirt inside already. Hurrah! 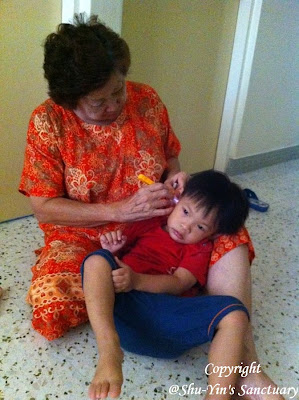 He's growing up so fast. Are you planning for a second child? ;)