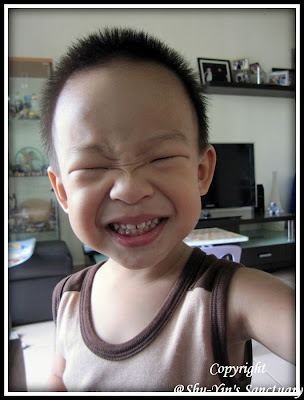 25 September 2011
This is also another backdated post. My son is actually almost 29 months now but I am still updating his 27 months post. Oh well, better late than never!

Pacifier
Good news. He is no longer so attached to his pacifier. He still takes it but only when he naps or sleeps in the room. He no longer asks or whines for it when he is in the living room playing his toy cars or watching the telly.

Once a while he does, he will say "Shern-Shern ai teat teat".
And then he will answer himself "Teat-teat only in the room".
Sometimes he would run to the room and suck the pacifier for 5 seconds and then take it out again and then run out of the room. Talk about addiction!
But most of the time, he would just ignored it and continue with his play.

Looks like another battle won - I finally won The Battle of the Pacifier! :)


Drawing
He received a pre-loved Fisher Price Doodle Pro from his cousins and he has been loving it. He then learns how to draw, but usually ended up us drawing him what he requests:
"mummy, draw car"
"mummy, draw big train"
"mummy, draw Yiu-Shern"
"mummy, draw Thomas"


Speech
Broadens his vocabulary and he could say words such as 'remote control car', 'automatic door', 'slippery' and many other words with long syllable.
And the thing is, he not only says it but he can really understands what each words mean.
I'm really amazed!


Food
He has taken a liking to eating sushi. When I said sushi, it means Shern likes the block of rice without the topping. Haha. He could eat up to 4-5 pieces of sushi rice at one sitting. Just the sushi rice with a plate of sweet sauce for him to dip and he is happy to let mummy eat in peace! So we have been visiting Sushi King, Sakae Sushi and Edo Ichi quite often when we do dine out. :)

At home, he still eats the same thing. Breakfast usually varies. Sometimes noodles from the market, or bread with half-boiled egg, etc. Rice for lunch and dinner and a lot of snacks in between. Snacks such as milo with biscuit, cereals, Yakult, etc.


Milk
Sure to have a bottle of 6-7oz of milk whenever he wakes up in the morning and before he goes to bed at night. Then sometimes another bottle of milk before or after he naps in the afternoon. That is about all. So his milk intake is about 14-20 oz per day.


Stroller
Shern is now ok to sit in his stroller. Actually, he loves sitting in his stroller nowadays. Usually I will ask him, "Shern wants to sit in the stroller or want to walk?". Stroller is always his choice. Either he likes it or he is too lazy to walk.
So nowadays we seldom carry him. He is getting too heavy to be carried.


Recent Things
It was a good month for Shern, with a visit to the Logos Hope, having fun in the garden on a rainy afternoon, going to the Youth Park playground quite often, went up to Penang Hill, and many others.
Posted by tanshuyin at 11/05/2011 01:50:00 PM