Pit Stop Cafe is located at the intersection of Jalan Pasar and Lorong Chulia.
Roads are narrow there, and there were limited parking on the Monday that we went. We saw a small inn nearby and parked there for a fee. If not, not sure where else we could have parked our car.

We were seated at a corner table. The decor was quite quaint and nice from where I was seated. I hadn't the time to walk about the cafe as it was quite full when we reached there, which was noon time.

I was eying for baby chairs and saw there were none. And the waitress were all quite occupied and busy, so I just plopped Khye on a stool at the corner of our table with a pillow behind him. He would be sitting quite stable as long as he doesn't move much and shift his buttocks. lol. And that was the reason I couldn't walk about the cafe, to keep an eye on him, to make sure he didn't fall off the stool. 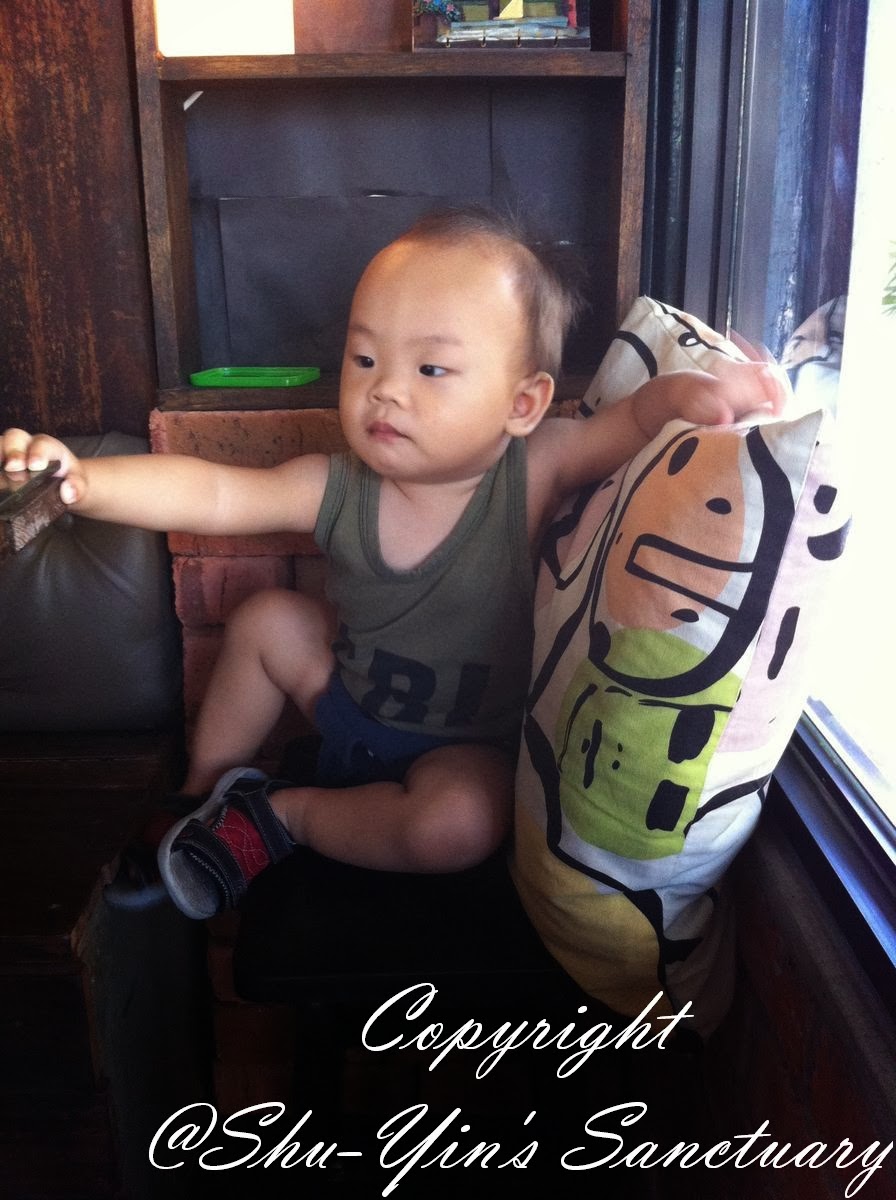 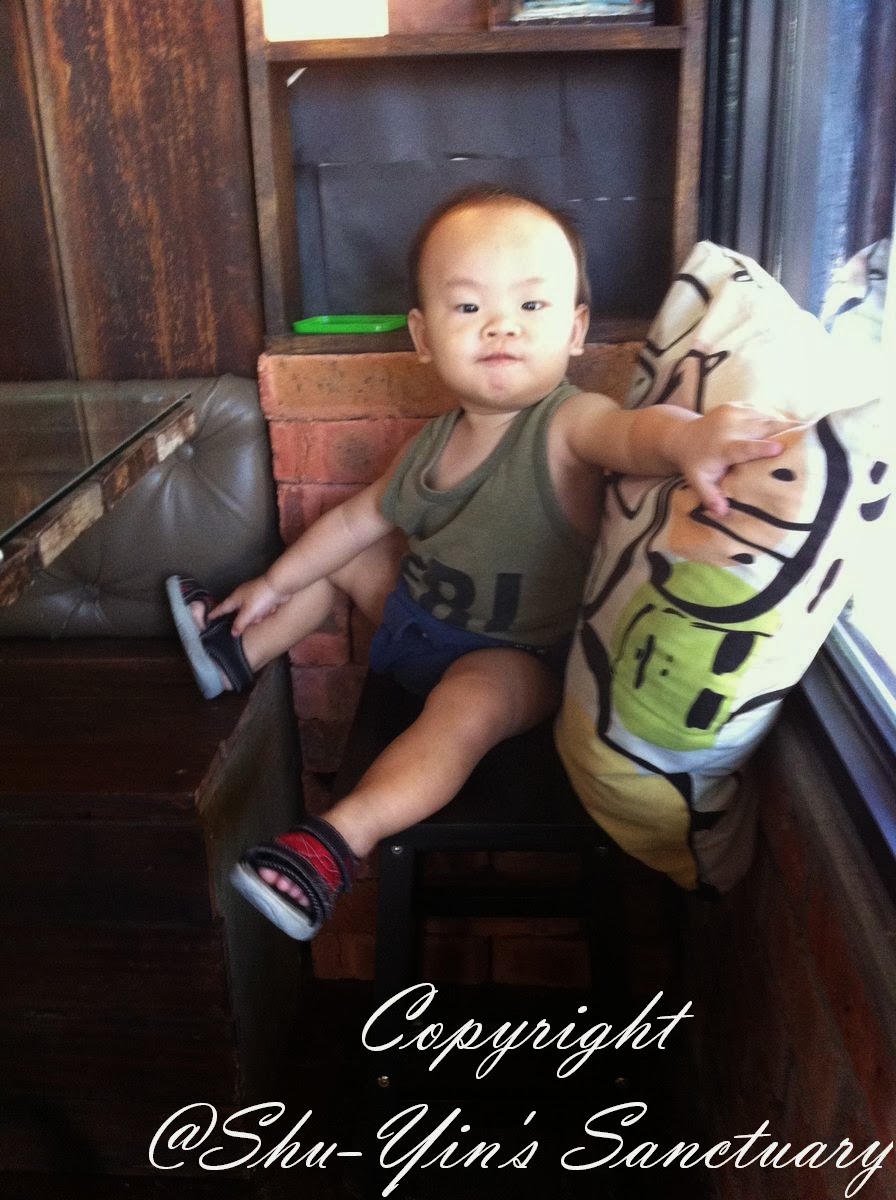 I didn't want to risk carrying him around with me, just in case he refused to be seated later. And if he did just that, there goes my lunch peace. lol. So I just sat there with him. 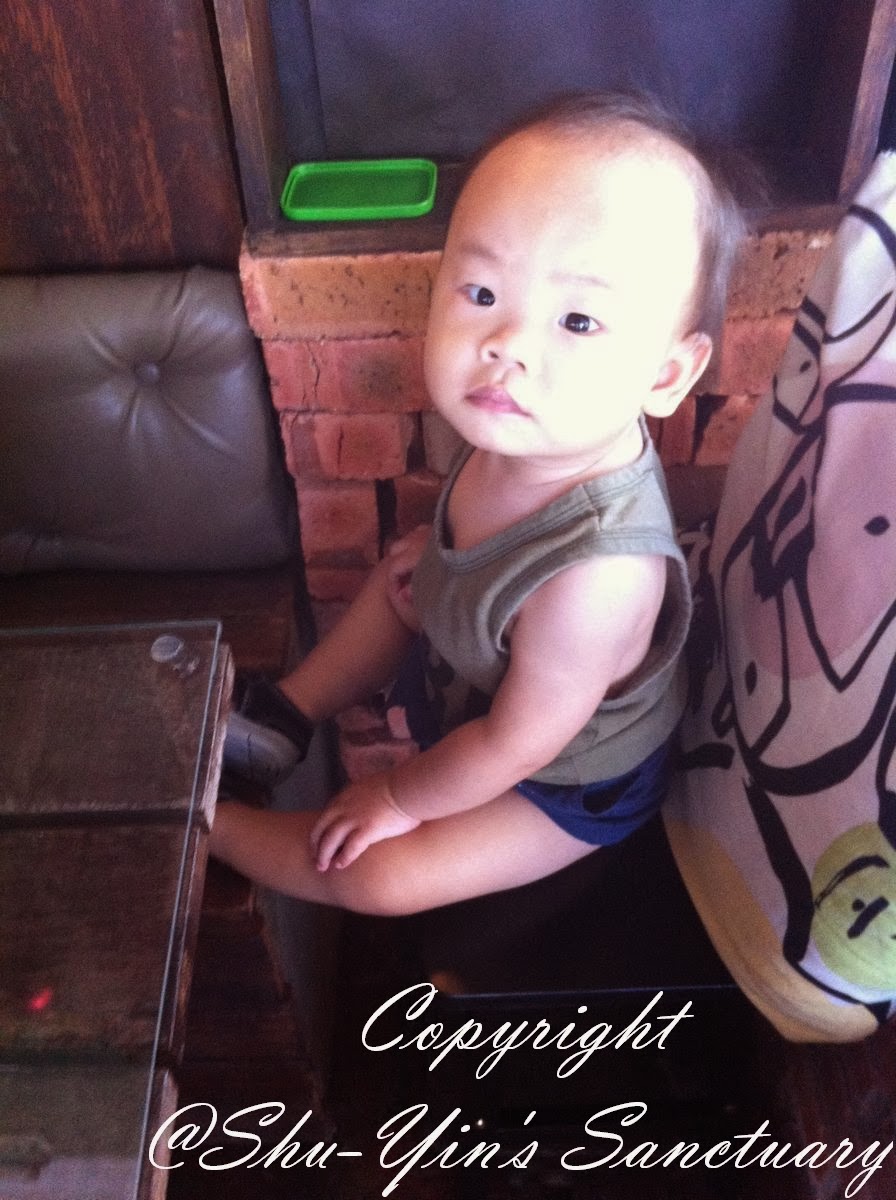 I looked up and captured a shot of the ceiling, the old fan with some old-style lightings. Nothing really special, but it added to the overall quaint atmosphere of the whole place. 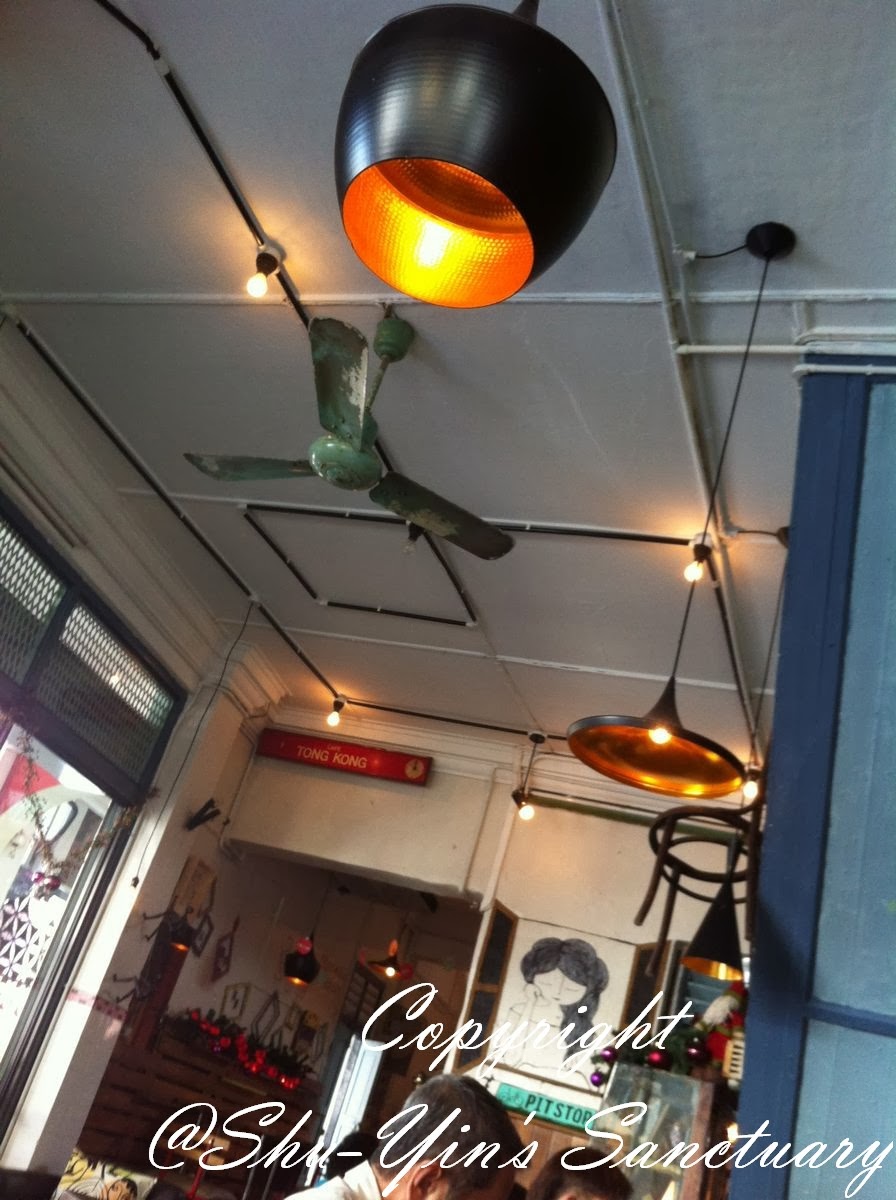 If you look at other people's blog reviews about this place, they take very nice photos of the place deco. But all I captured was a photo of hubby with an obscure background of the cafe.
Ok, pardon me, coz I usually just focus on taking photos of my kids, and totally forgotten about everything else. 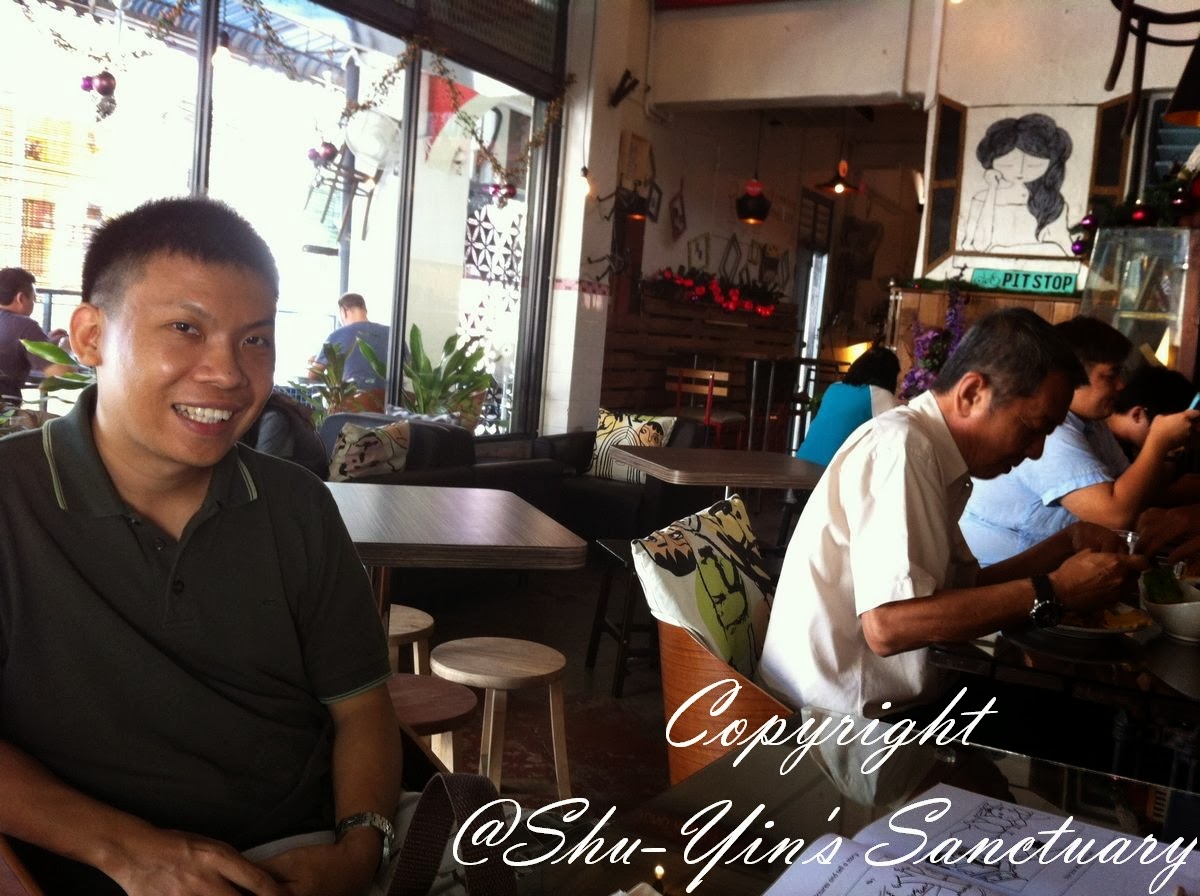 And Shern was occupied with an Activity Book I brought for him. 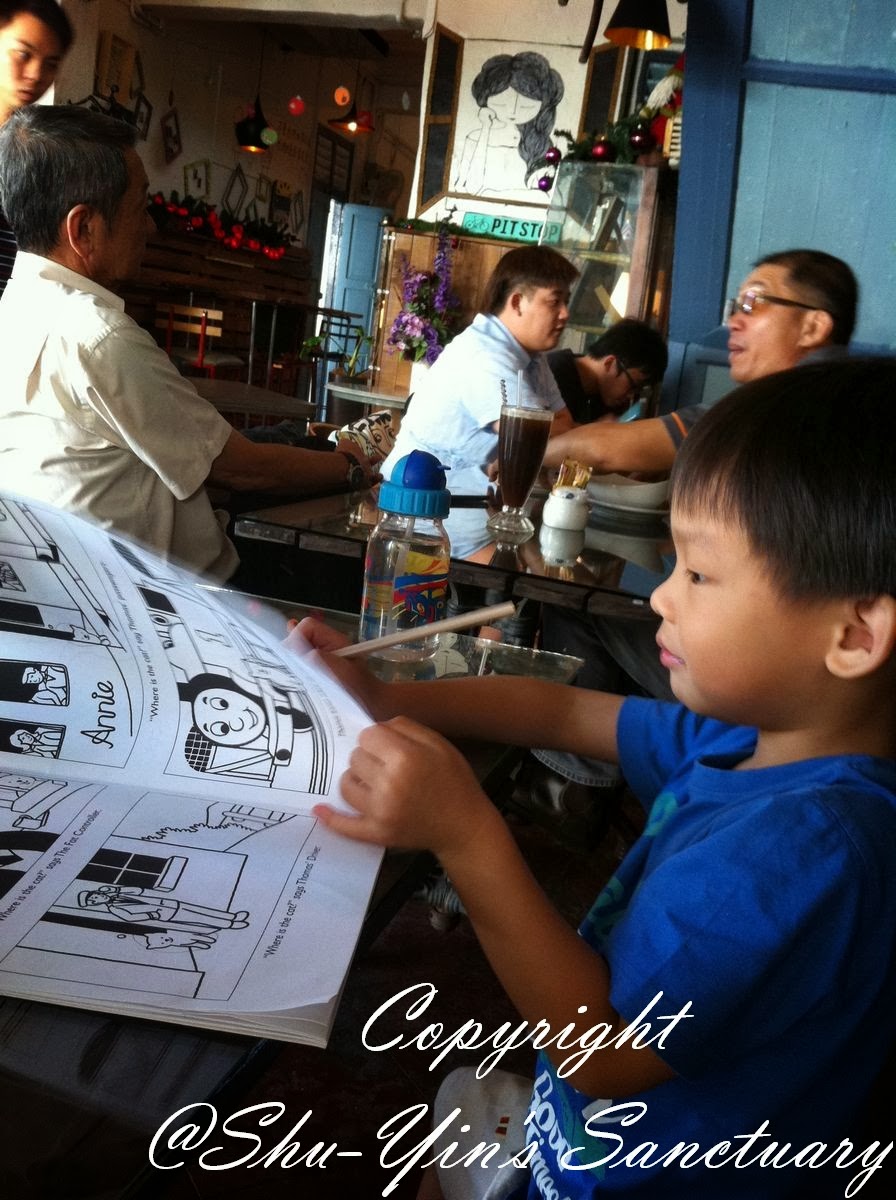 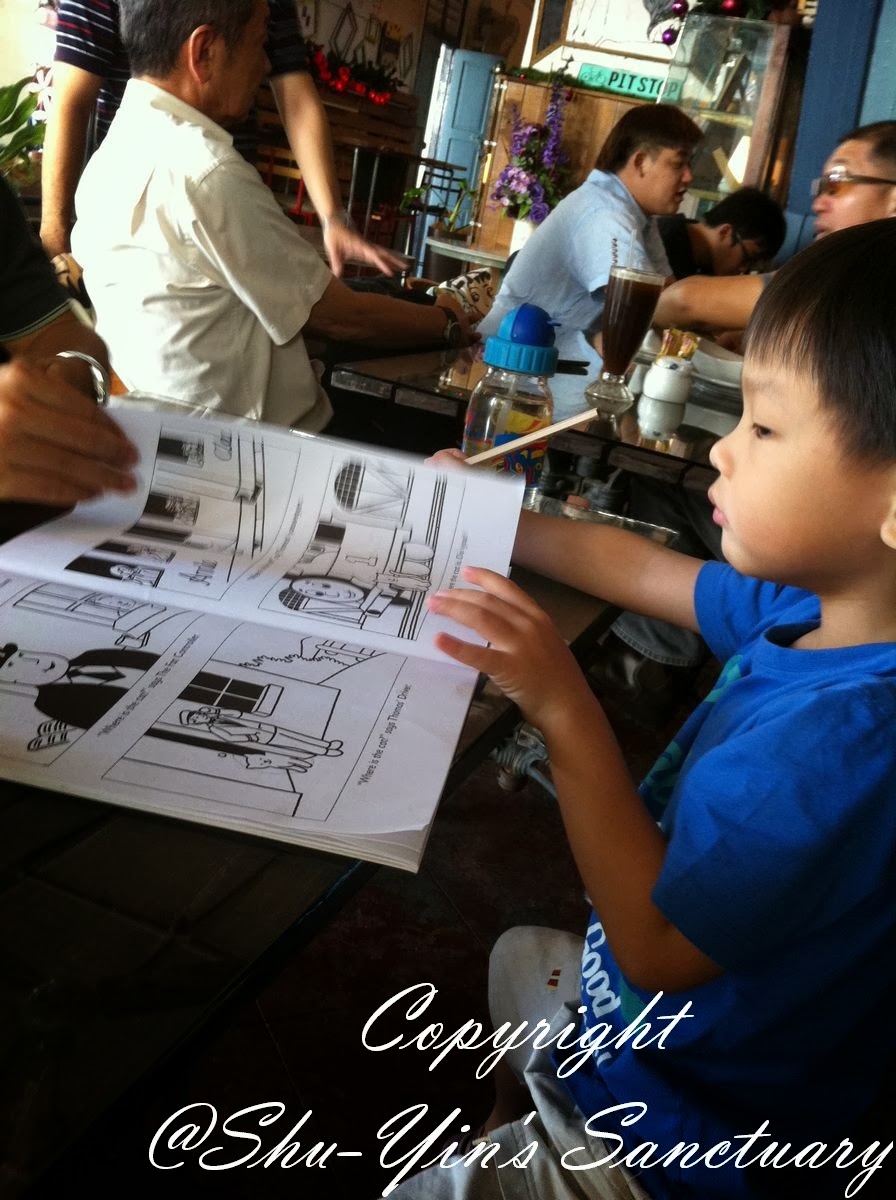 He was happy with it. 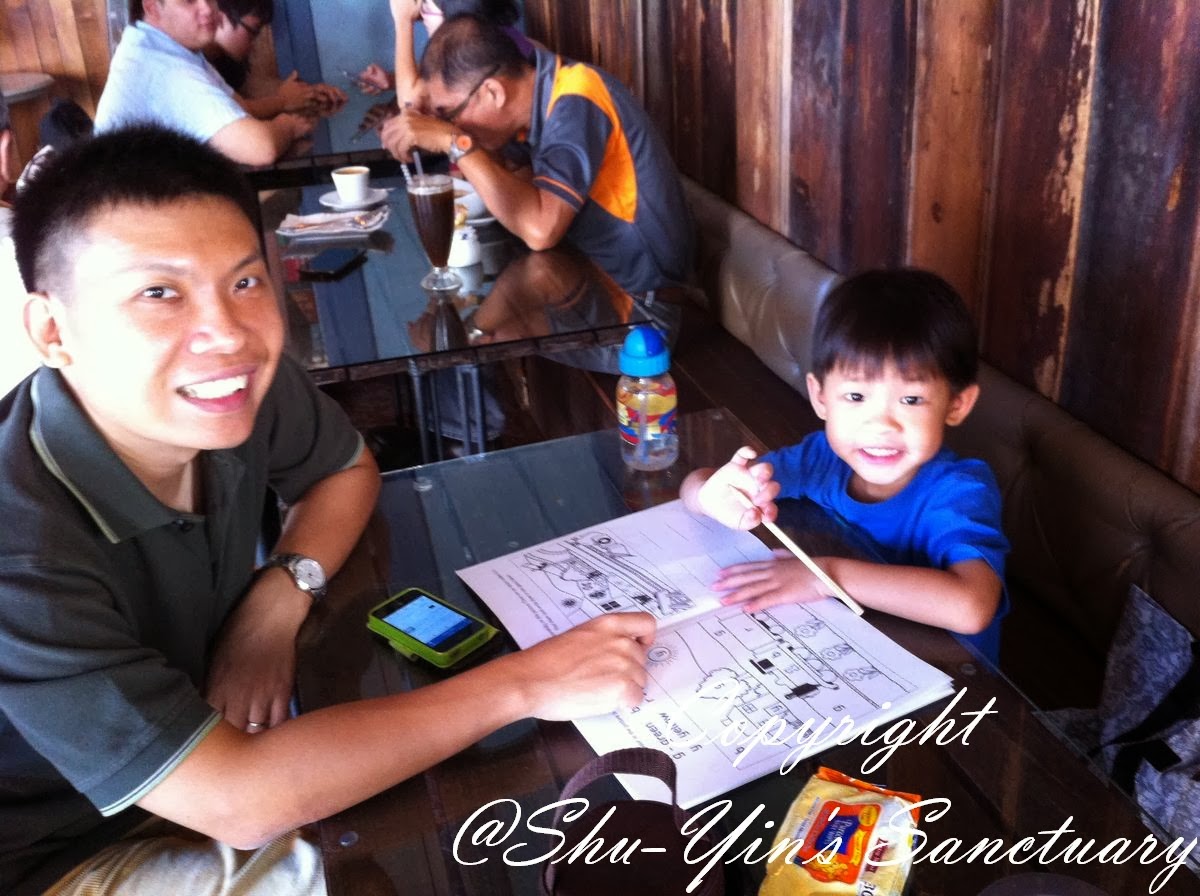 After a while, Khye got cranky and didn't want to sit at his place. So I had to change a chair for him to create a different environment for him. He got quiet at last. 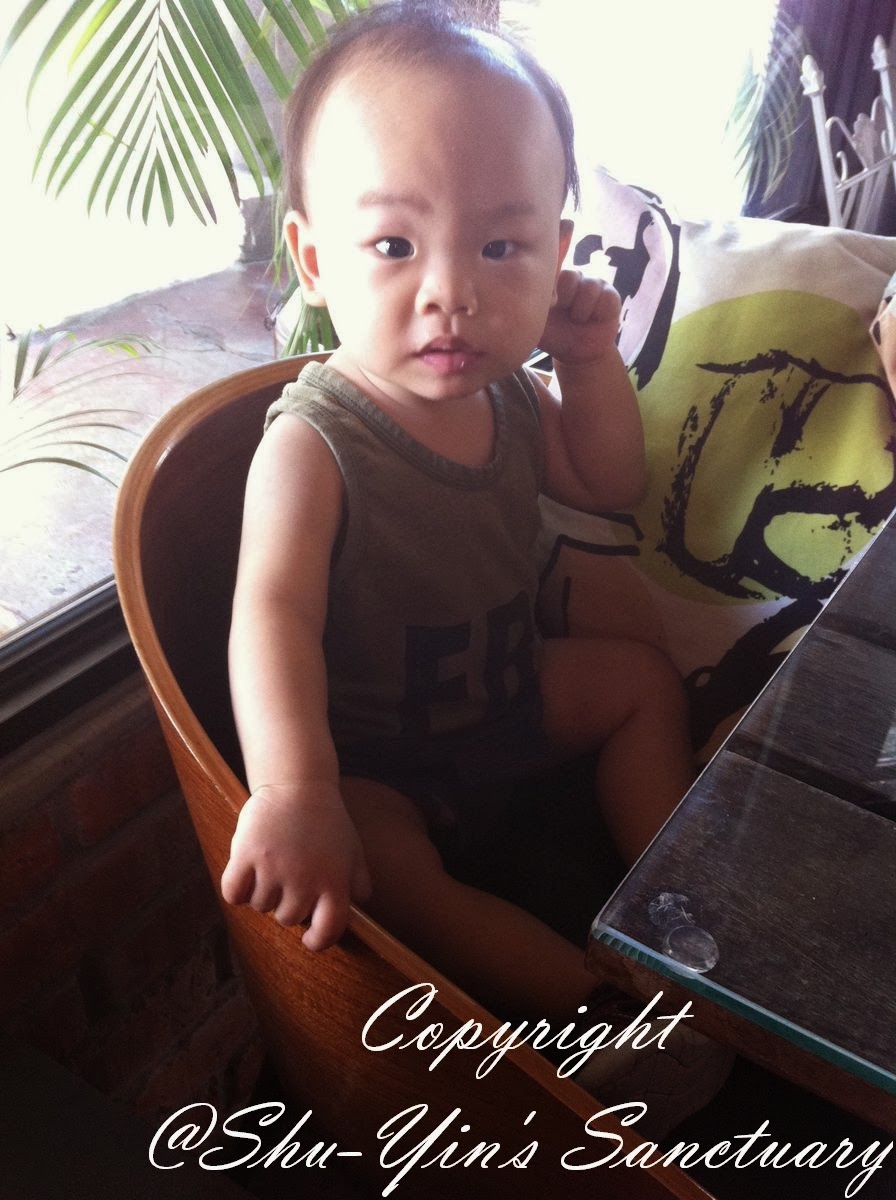 Menu was extensive, from pasta to sandwiches to rice, and they serve all-day-breakfast. They have Western and also Local dishes, and even some Nyonya dishes. Quite a variety I'd say. And prices were reasonable too, ranges between RM10-25 for mains.


Oh ya, a thing I need to point out was that our orders too soooo long to arrive, aside from the Iced Chocolate that we ordered. 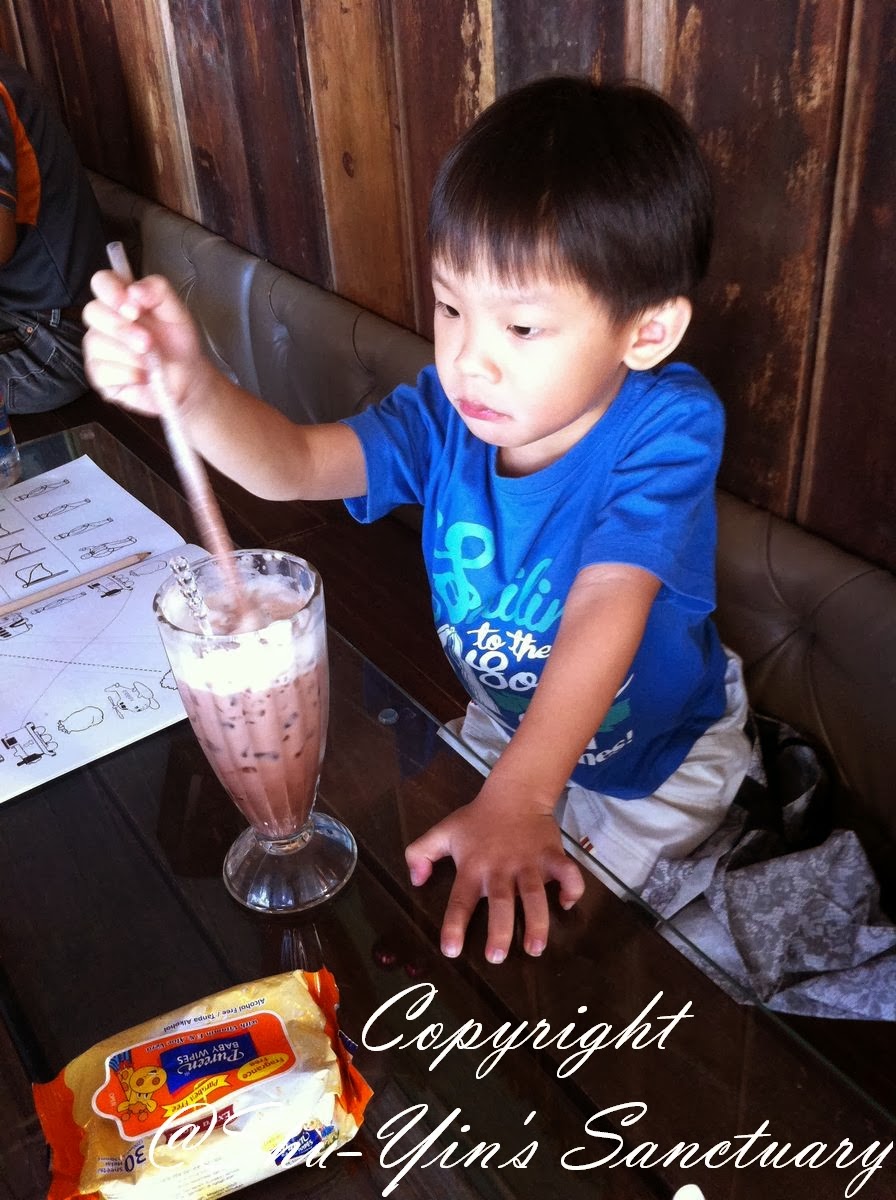 Look at his bored face while waiting for food. 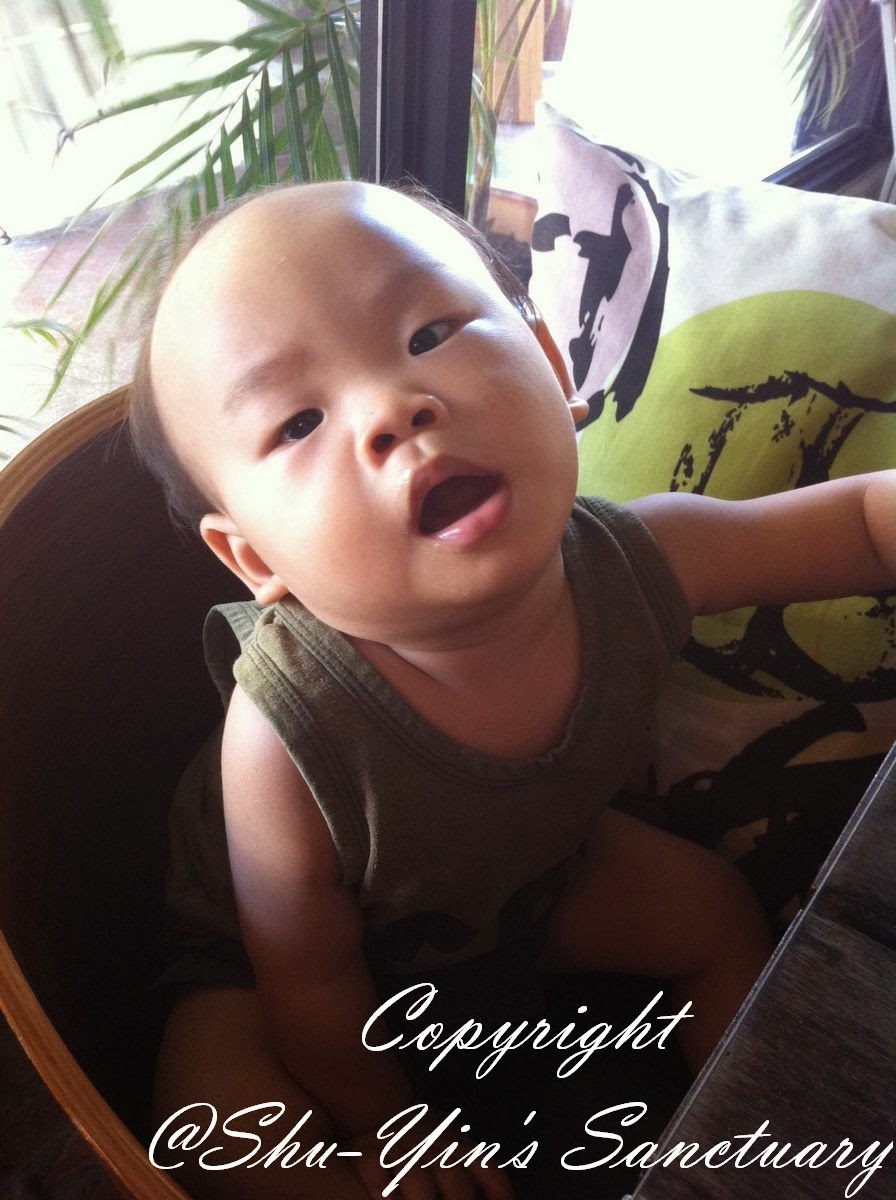 It took almost half an hour before the food was served to us. Half an hour entertaining the kids were too long in my opinion. It may be because we went during peak hours and that the place was quite full. But nevertheless we were hungry and it felt like a century. lol.

We ordered something like the Big Breakfast with Salmon, or something like that, and it was good. It was supposed to come with a piece of Hash Brown, but they were out of it and replaced it with another piece of toast, which I wasn't really happy about it. It was because they didn't inform me earlier, until I asked them 'Where is my hash brown?'. 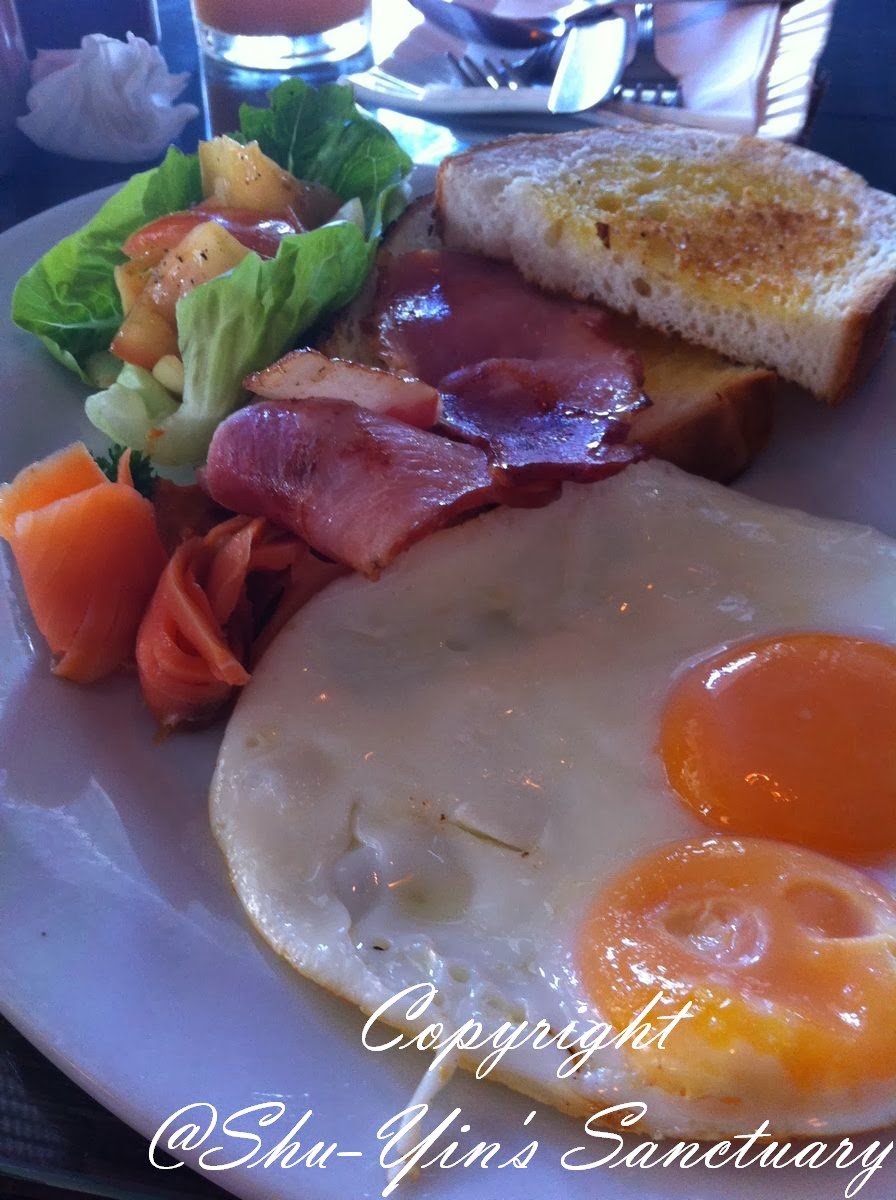 Shern was happy he saw the sunny side ups as he was an egg lover. 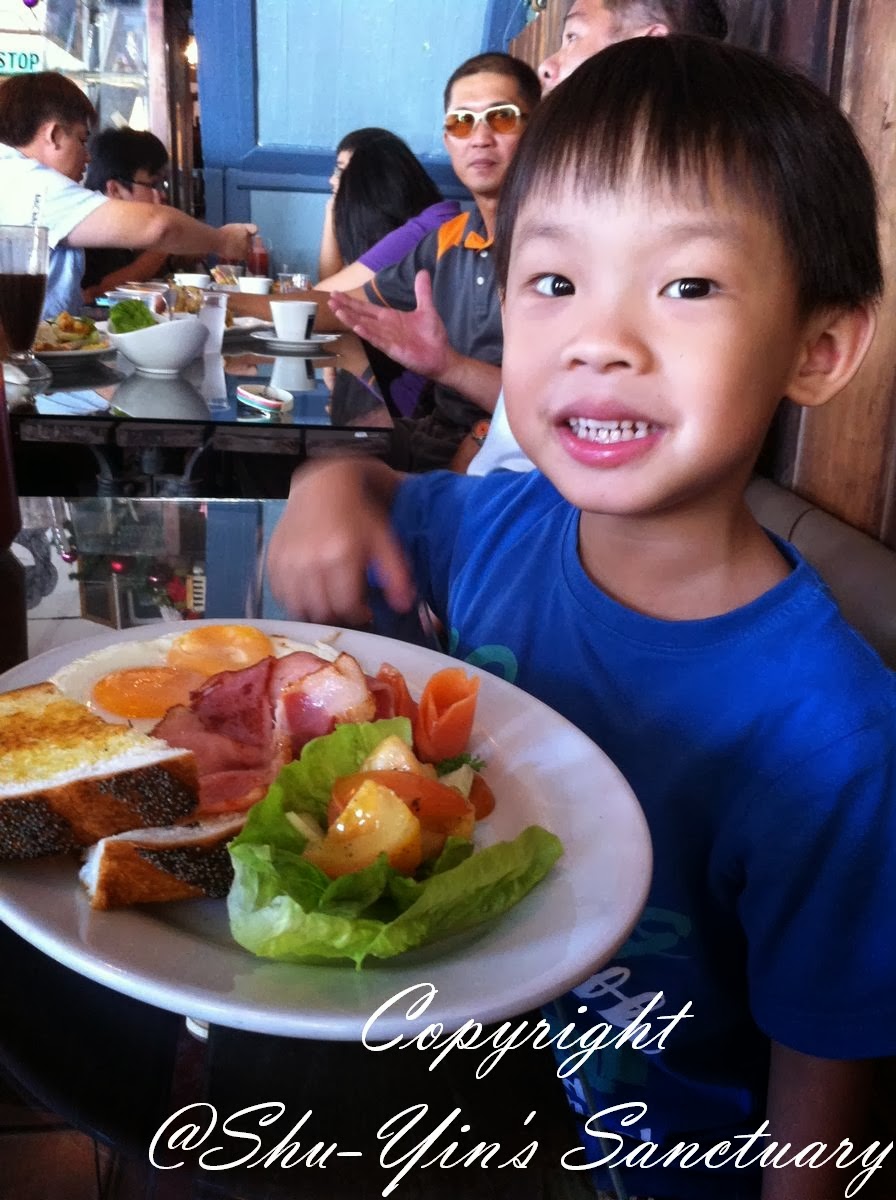 The Spaghetti Carbonara was decent too, taste-wise and portion-wise. Nothing to shout about though, but quite nice. 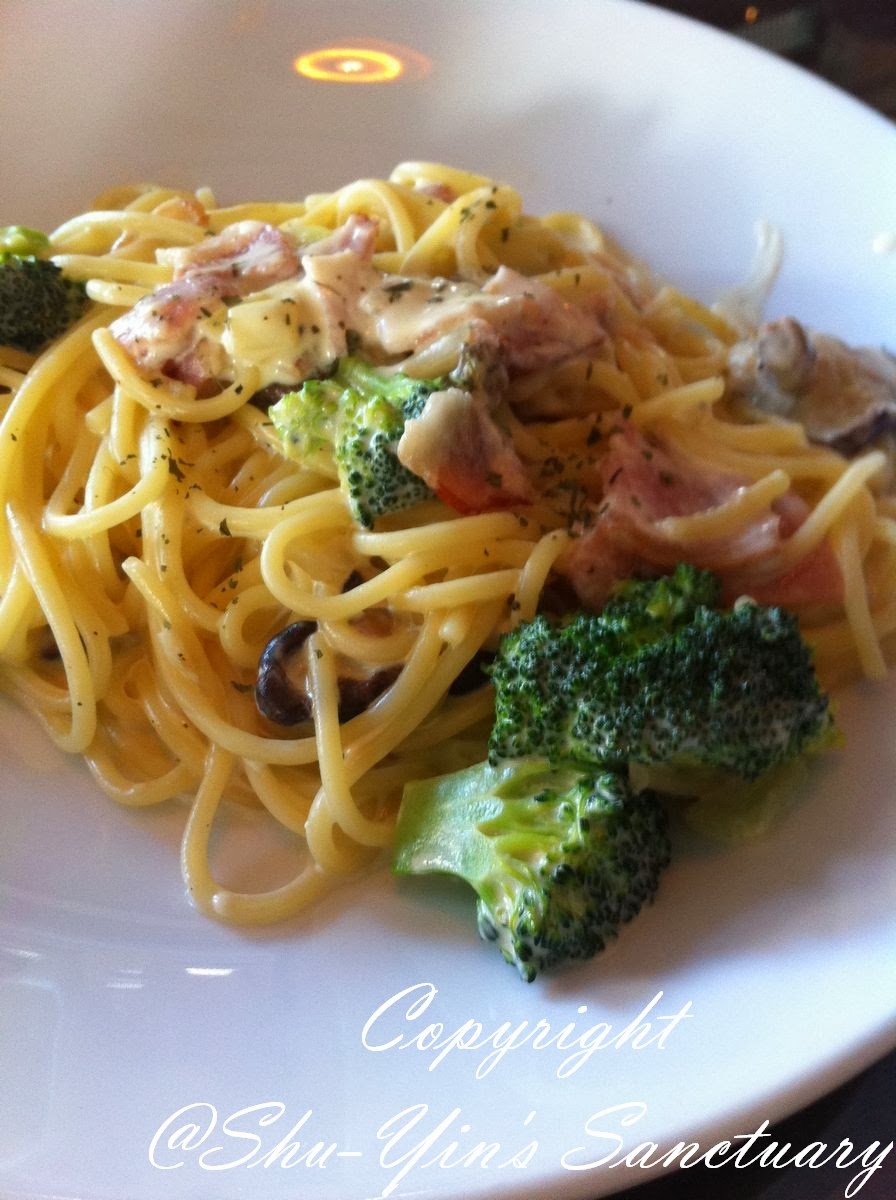 We ordered a Nutella Banana Pancake, served with Cashew Nuts and maple syrup, and also a scoop of Vanilla Ice-Cream.
Well, this was quite below expectation for me.
The Nutella spread on the pancake was so thin, I could barely feel it. The pancake was done quite fluffy and nice, but portion was small. Would prefer 2 slices.
Banana pieces could be upped, since bananas are cheap in Penang, right? Haha. Cashew nuts tasted weird, prefer almonds. But I like that they served with a scoop of ice-cream.
Overall, I won't order this again. Would rather make my own pancake at home. But that's me. 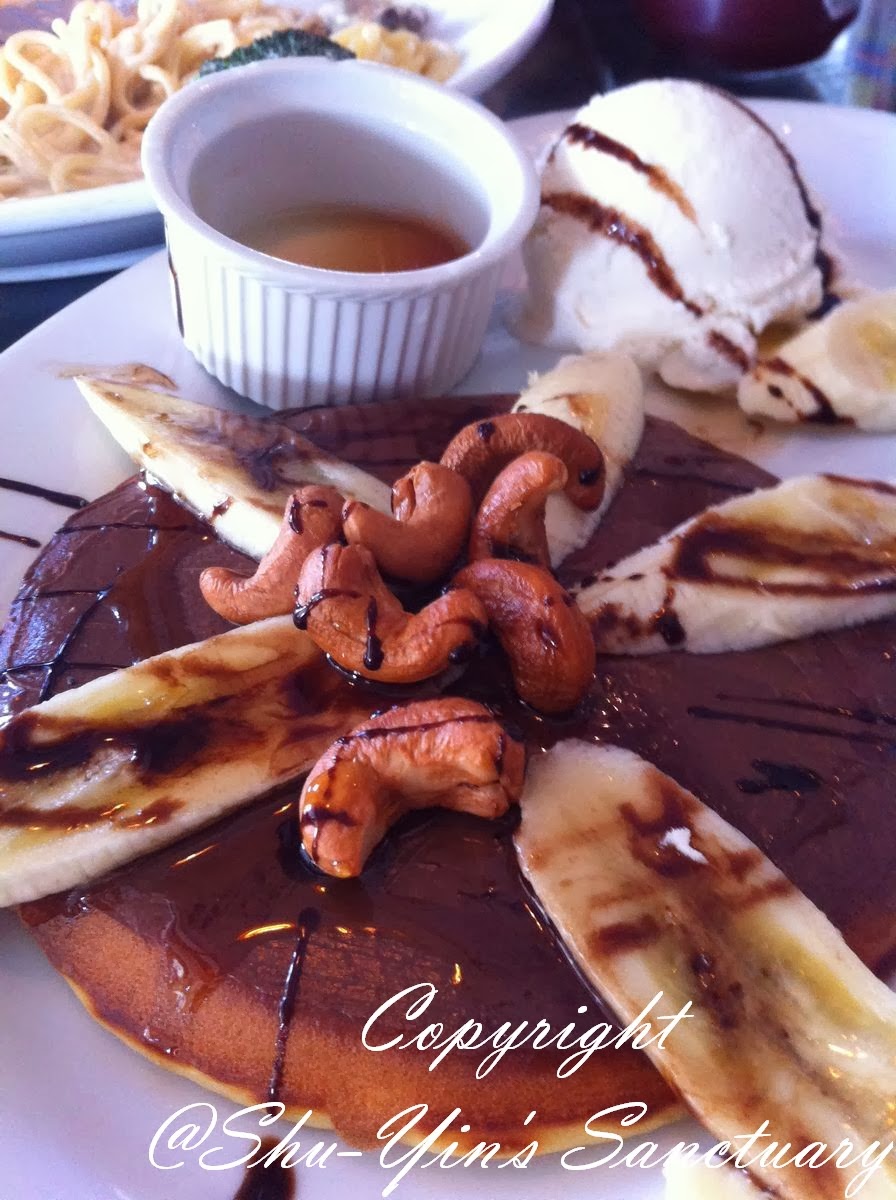 We finished up all the food in less than 20 minutes, so the waiting time was longer than our dining time. Haha.
Both my kids had fun in the car, giggling and laughing behind in their own seats. 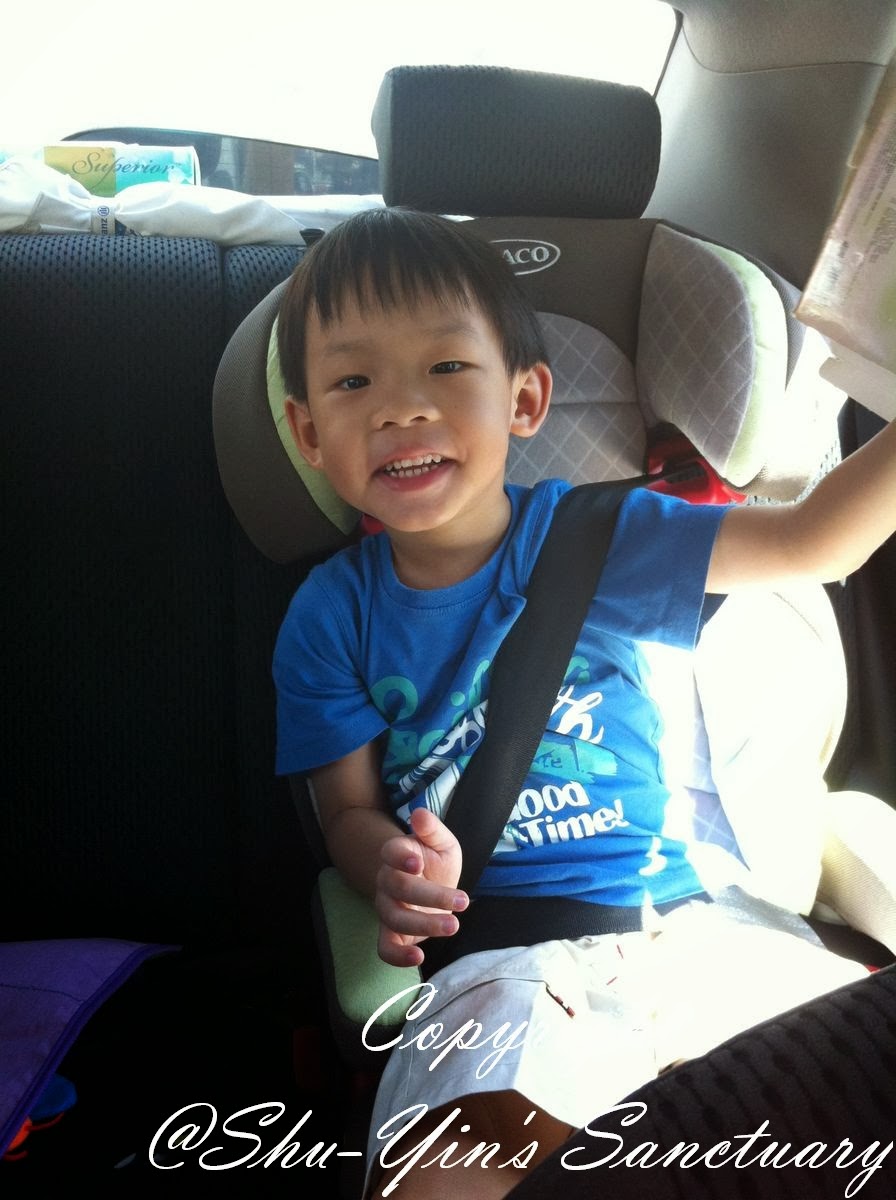 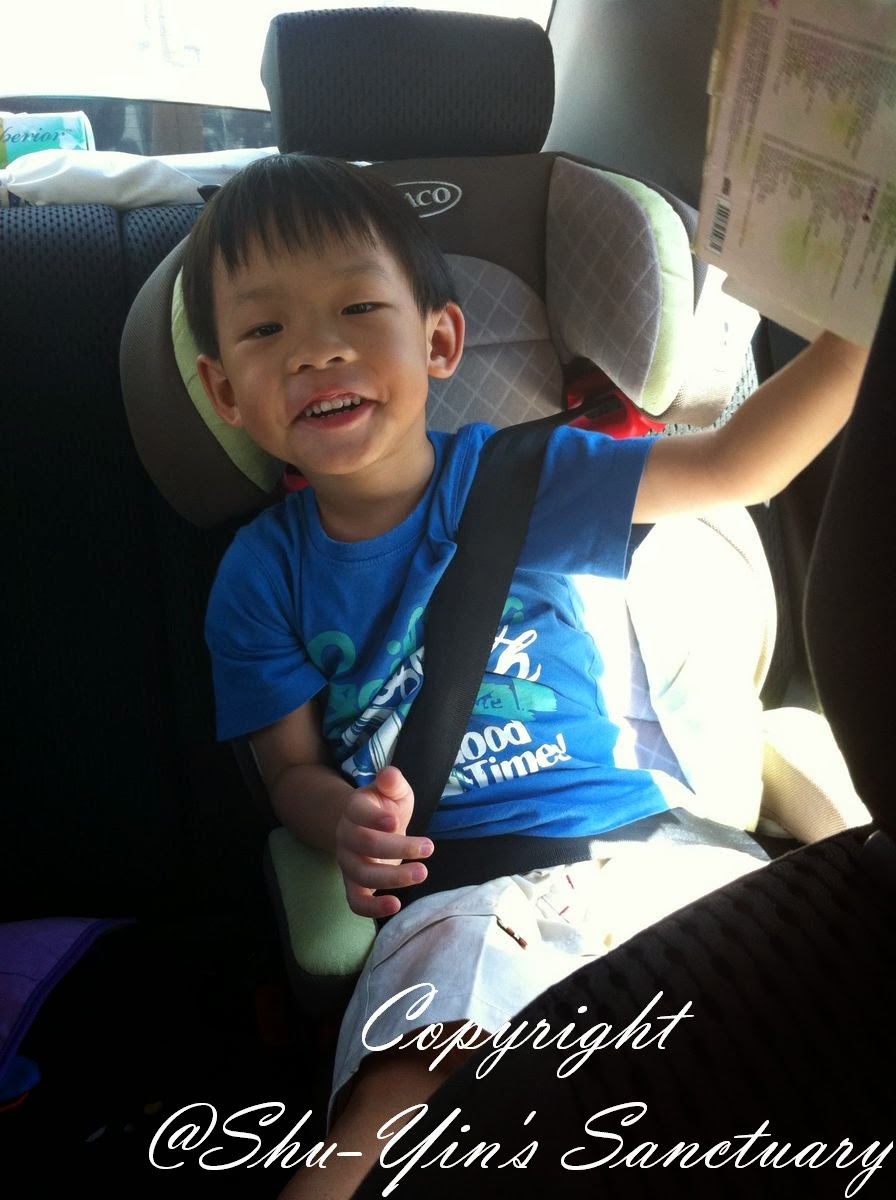 And Khye was tickled by the sound the toy makes when he pressed their noses, so he had a good laugh about it.
By the way, Khye has really good fine motor skills and he can really press precisely on the small button on their noses, something Shern could not have done it at this age. 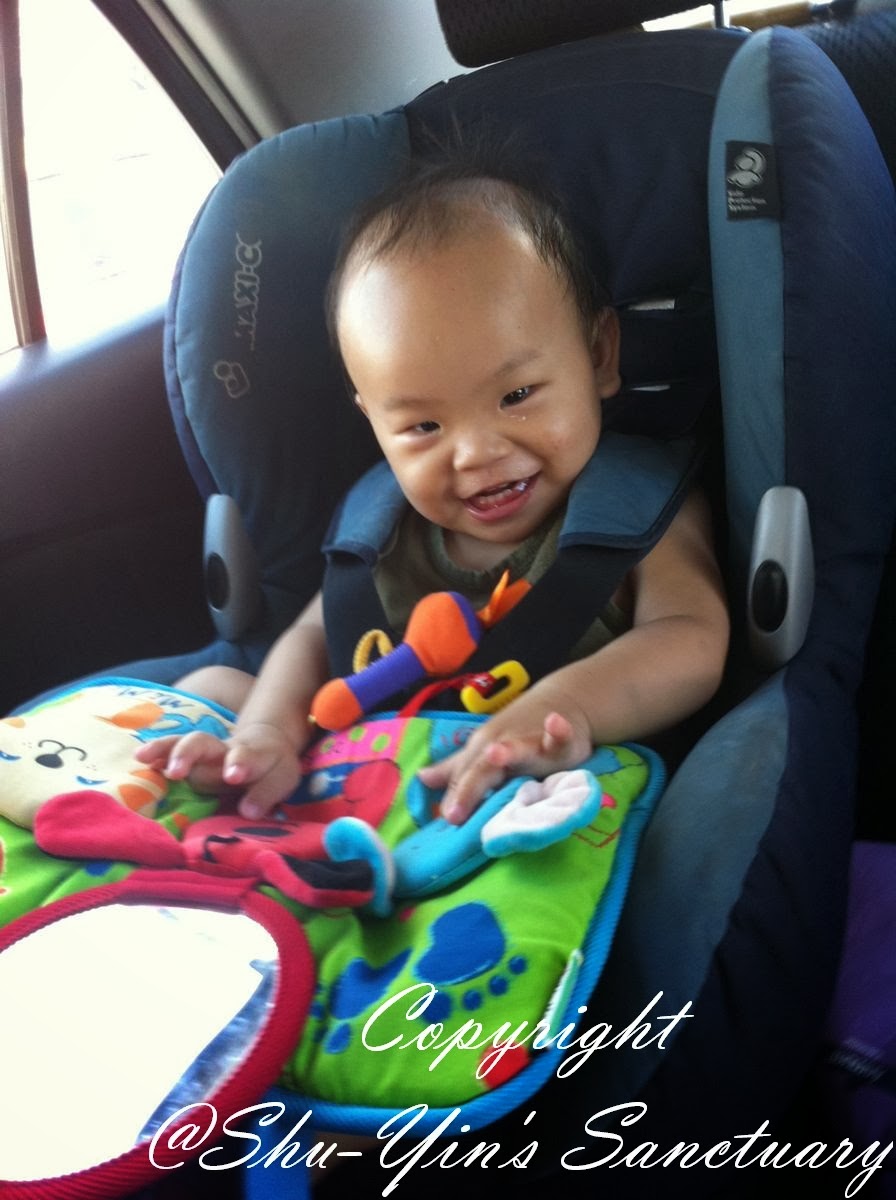 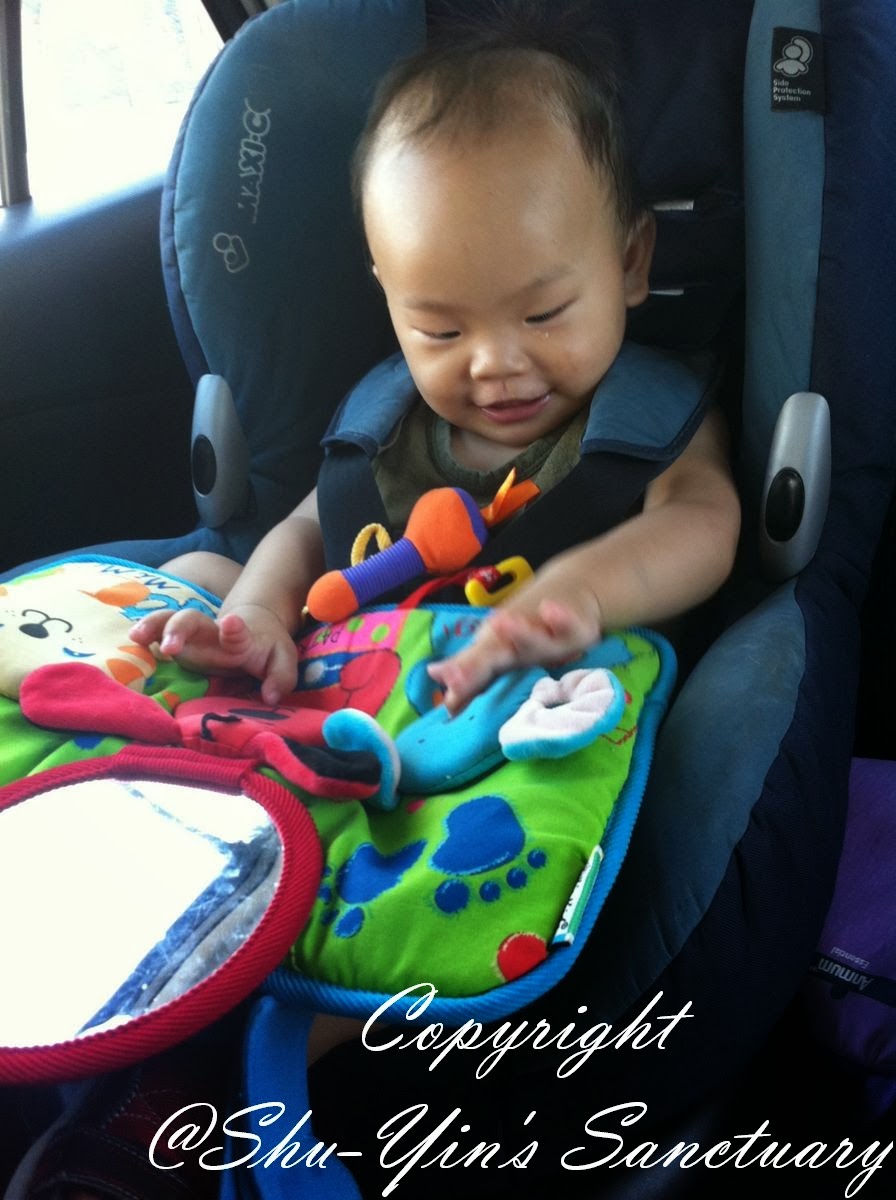 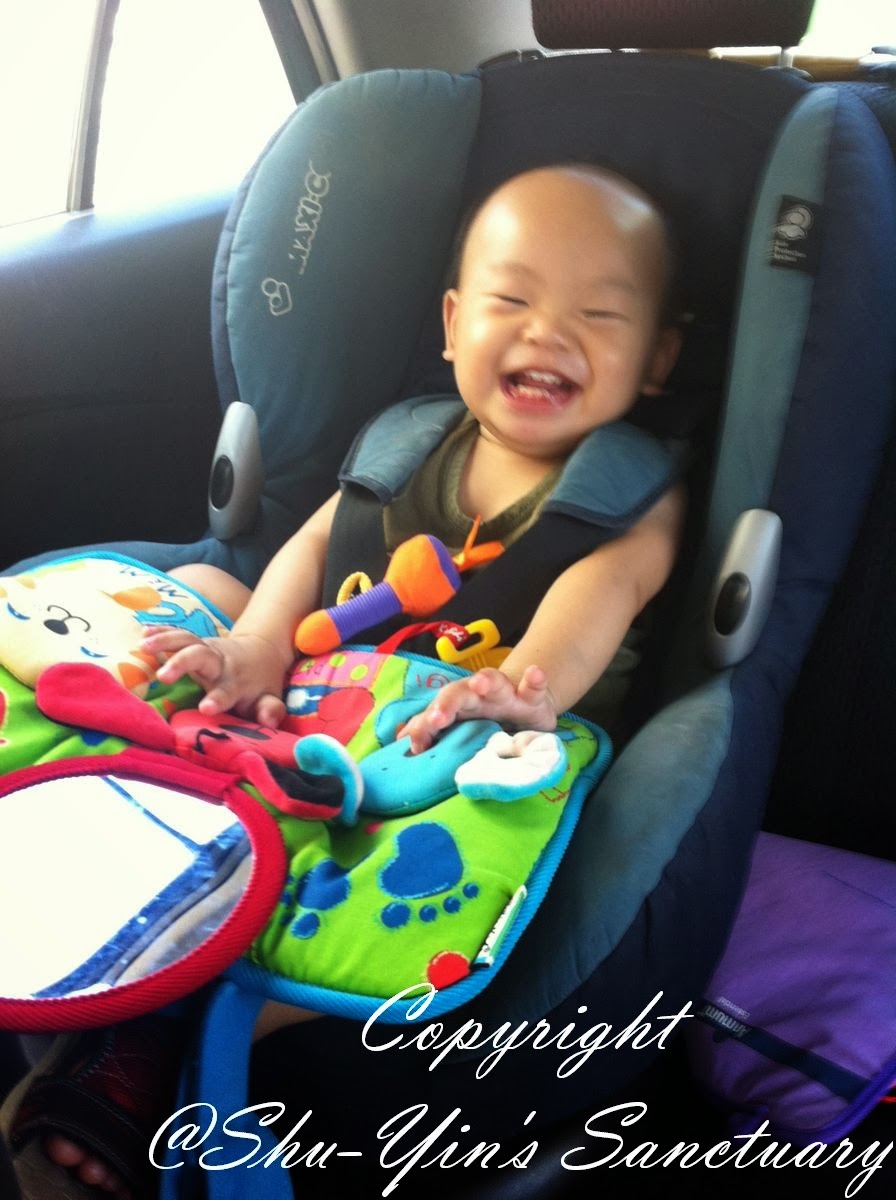 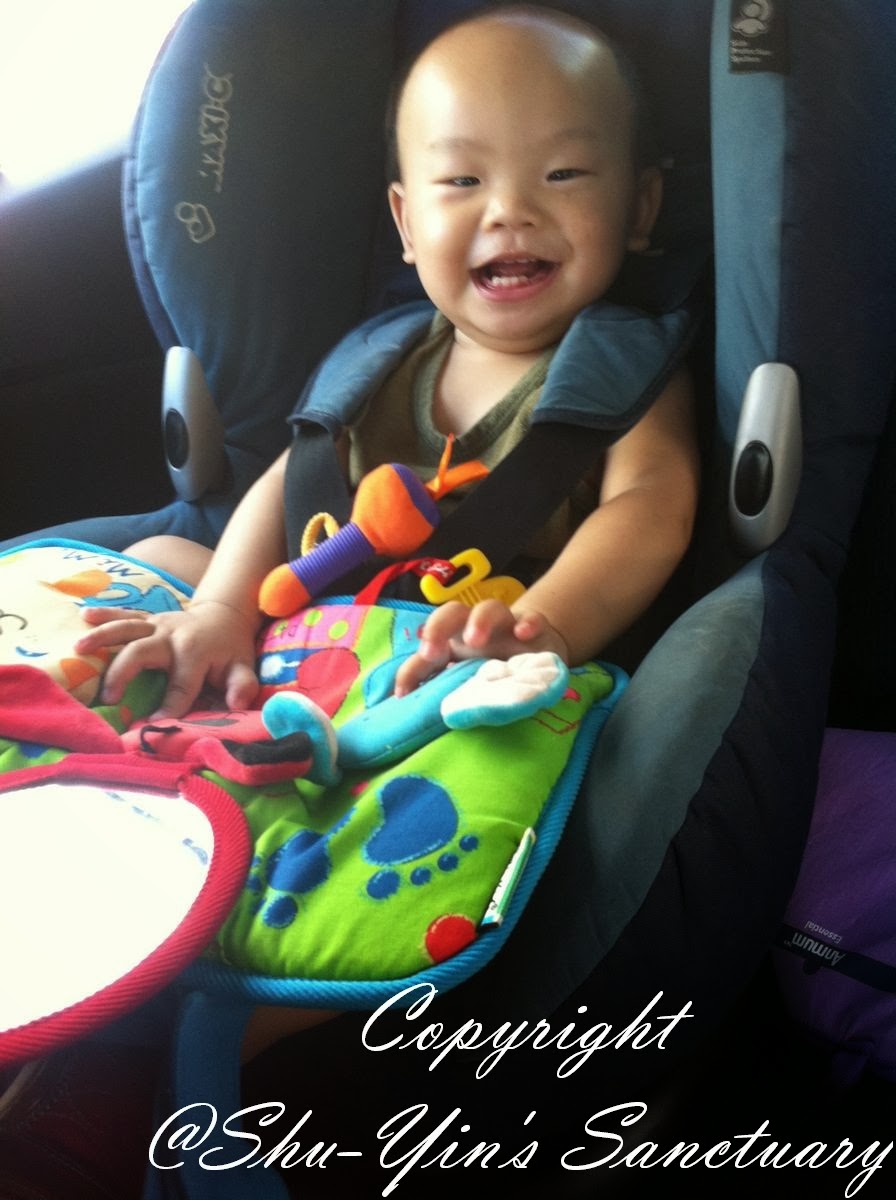 Well, overall, it was a good lunch for us.
We will be back to try out other food. But the next time we would avoid peak hours and hope that the food preparation time would be faster.