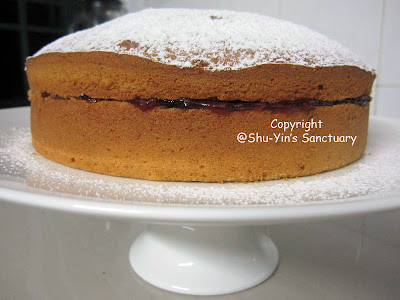 25 November 2010 - Yellow Cake with Raspberry Jam Filling
This cake is my first cake that I've spread fillings inside. Which means that first time I did the horizontal slit move in the middle of the cake, spread some raspberry jam on the cake, then plopped the other half of the cake back on top.
Yes, I managed to go through all those and my cake was still fine. I thought with my clumsy hands, I would have dropped the cake or something. Glad it went well.

Well, as usual, this was another midnight bake. I started making this cake at around 11pm. And by the time I finished assembling the whole thing, it was already 2am! Yes, it took me 3 freaking hours to assemble the cake.
And that was only possible because I could not wait any longer and just cut open the cake into half and spread the jam over it. That explains why my cut was a little crumbly, because I had no patience to wait for the whole cake to cool.

Anyway, because I did not have a 10-inch round cake pan, I used an 8-inch round cake pan. So baking time was a little off. 10 minutes more than the recommended time because of the depth of the pan. By the time my cake was done, the crust got a little hard. But was still OK.
The burst split on top should be normal I guess, because the photo of the recipe I got from also did have that burst! :) 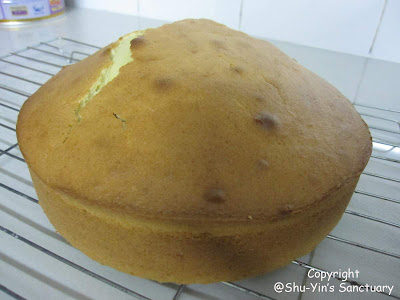 Once cooled down (which I could barely wait), split the cake into two horizontal layers with a serrated knife, or you can use a Cake Leveler like me. Ooohh...I am loving my Wilton's Cake Leveler. 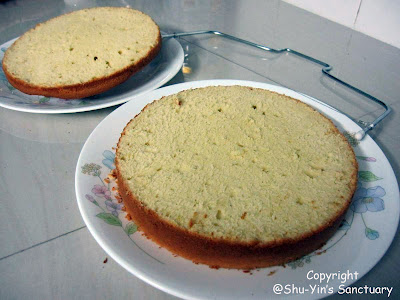 Spread it with raspberry jam. Spread from the outside to the inside to avoid spillage. Be a little generous. But not too much, though. 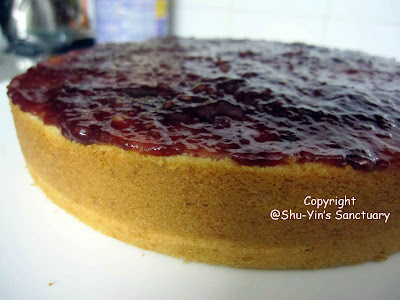 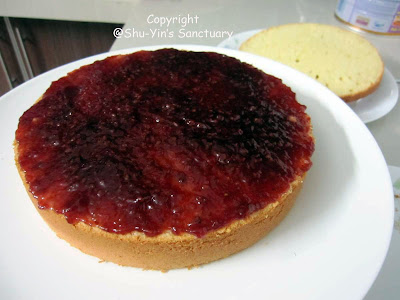 Then plopped the other half of the cake on top. 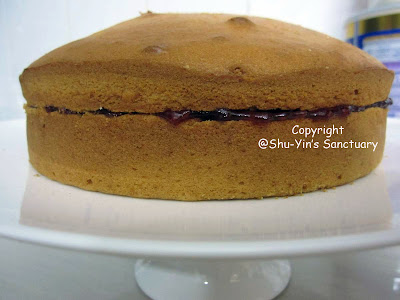 Dust it with some icing sugar and oohh....doesn't it look grand and homemade? 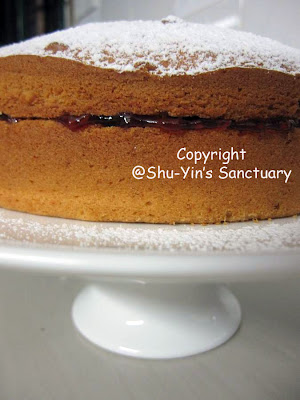 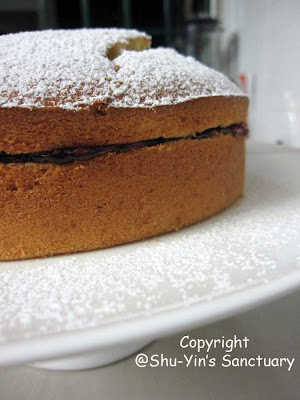 A slice of that cake looks like this. Moist and yet soft cake texture although I used all-purpose flour instead of cake flour. It was a little dense, but not too dense if you know what I mean. But simply delicious. 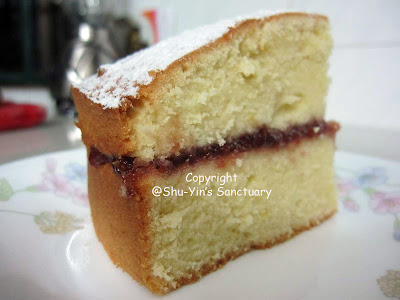 That was why even at 2am, hubby & I cut ourselves a generous slice before we hopped onto bed. 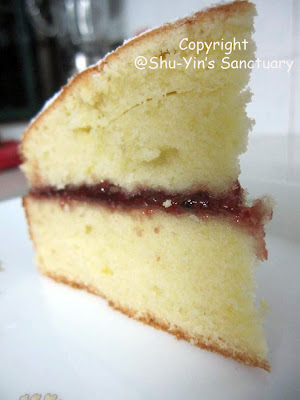 The next morning, I remembered and took a photo of the cake with the awesome natural sunlight. Brought it over to mum's place and got so many praises of this cake. 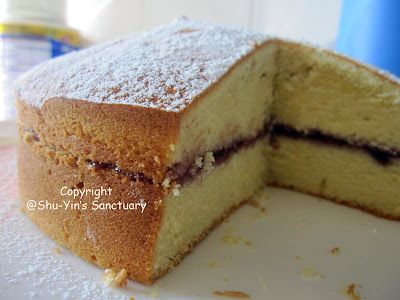 Preheat the oven to 375F. Grease and flour a 10 inch round cake pan with 3 inch high sides. (I used a 8 inch round cake pan instead). Sift the flour, baking powder and salt together in a medium bowl and set aside. (I skipped the sifting part 'coz I was lazy!)

Transfer batter into baking pan, smooth the top and bake for about 40-45 minutes (mine took almost an hour) or until toothpick comes out clean when inserted into the center of the cake. Let cake sit in pan for about 5 minutes, then run a knife along the edges to loosen cake and unmold it. Let cake cool completely.

Once cool, split cake into two horizontal layers using a sharp serrated knife. Spread jam evenly over the bottom layer of the cake and top with remaining half. Sift with powdered sugar and serve. This should serve about 8-10 people.