I want to jot down the labour and delivery experience with baby Vern before my memory fail me.
Vern is now 20mo and only now I have time to write down this. This is also for my own record. #thirdbabysyndrome #nevertoolatetoblog

My 3rd pregnancy labour happened very suddenly.
I remembered going to Pasar Ramadhan with hubby. I even remember buying the fried cempedak and couldn't wait to get into the car to sink my teeth in them (not nice to eat at the market when ppl are puasa).

Once I reached mum's house, I had a bad tummy ache. Khye was fussing then because I went to the Pasar Ramadhan without him and so was rather clingy to me. I remember telling mum to help me entertain Khye because my tummy was hurting really bad and I needed to go to the toilet.

I didn't think it was labour pain initially because I was only at week 37 gestation.
It was after 2 rounds of toilet and not making any poo that I told my mum 'I think I need to go to the hospital because it really hurts'. (Still so glad I managed to eat 4 fried cempedak in the car just now!)

And from there, the pain started to really escalate.
Hubby still needed to make a small detour back to our house to grab the hospital bag. And I was already clutching my tummy in pain.
It was really really painful (and I am someone with a very high threshold of pain) and I remembered telling hubby to "drive faster but please don't get into an accident"!

15 minutes, I reached Island Hospital. It was about 8pm or so then.  I knew Dr. Eric was not in as he was in Japan for a seminar and so I requested for Dr. Mah.
They wheeled me into the labour room and the nurse was shocked to find that I was already 10cm dilated, and she quickly went to phone the doctor.

I guess I was already fully dilated in the car when the pain escalated! That was why I was in such such such pain.
The nurse then put his hand under there and didn't take it out, so I asked her what was she doing inside me.
She said "erm...to stop the baby from coming out before the doctor comes".
I was like please remove your hand because it was so uncomfortable and telling her not to worry, Iwon't deliver baby so easily. If not my previous 2 deliveries won't end up as emergency c-sec. Haha.

And I was really in pain the whole time while waiting for Dr. Mah. He actually arrived in like 20 minutes although that 20 minutes felt like a lifetime to me with the excruciating pain.

And that was also the reason why there were no photos of me during labour. Because it happened so fast and I was in excruciating pain the whole time I would have boxed Peter if he took a photo of me then and not holding my hands. hahahaha. #crazywifeinpain

Dr. Mah came and then told me that I had a very narrow pelvis so it would be quite difficult for the baby to deliver naturally and also based on my past deliveries. But anyway since I am already 10cm dilated, he asked me to give 2 tries. And if that failed, he would wheel me in for c-sec.

I was glad I got to push and as expected the baby couldn't be out and after that 2 tries, I was really glad they wheeled me in. Before I was already shuddering in pain without any painkillers.
And then I started to curse again because I needed to wait for the anaesthetician to give me the spinal jab, and also to wait for the people to get the Operating Theatre ready.
(why couldn't they have prepared this earlier? arghhhhh).

And so another 15 mins later (which lasted another lifetime to me) it was ready and once the spinal jab was inserted in me, omg.....no more pain.

And while Dr. Mah was operating on me, he told me that Dr. Eric did sent him a message briefing me on my condition. He said Dr. Eric told him that my bladder has been moved from its original place when he operated on me the last time, and so asked him to be careful when he made the cut.
Wow......I didn't know that and I am thankful for Dr. Eric for making effort to brief Dr. Mah on this!

By the time I woke up, I was shivering as usual at the resting area of the Operating Theatre. They told me he is a boy and he weighs 3.3kg. (My lightest baby so far, but then he was born like 3 weeks early!)

This is the first photo we had of him and he looked sooo perfect to my eyes!

And then they wheeled him over for me for our first ever breastfeeding session. 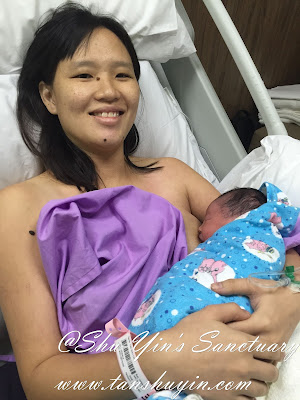 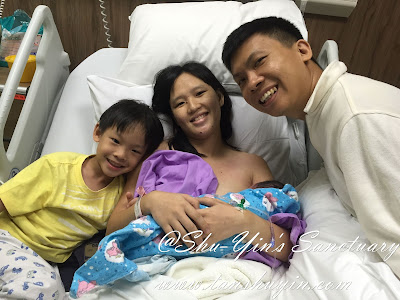 Email ThisBlogThis!Share to TwitterShare to FacebookShare to Pinterest
Labels: 5 of Us, Lim Yiu-Vern, Post-Pregnancy#3