Wah....it was pretty chaotic for the past one week or so. After Christmas Day, we went to Genting for a few days. Then it was NYE where we brought Shern to SQ to watched the fireworks display.
Then it was Shern's first day at a new kindy. And then Khye got sick.

Baby Khye has come down with some cough and after 2 days developed some flu. Brought him to see the paediatrician. Dr. Dan said that Khye requires the nebulizer twice a day to help clears the congestion in his nose. The next day, we could hear him wheezing when he breathes, so I knew then it was getting worse. Furthermore, he seemed to have developed a cough as well, so we went to see Dr. Dan again.

Here are we, waiting for our turn to see the doctor.
As suspected, Dr. Dan said Khye needs to be hospitalized.
This is because as the mucus and phlegm accumulate in his nose, he couldn't breathe with his nose, thus uses his mouth to breathe. And so he didn't want to drink his milk because he needs to choose between oxygen or milk. Of course Khye chooses oxygen! ;D

Thus he needs to be hospitalized as he needs the use of the nebulizer every four hourly, and needs to do chest physiotherapy. And the worse thing is that he also needs to do the nose/throat suction. Poor baby. 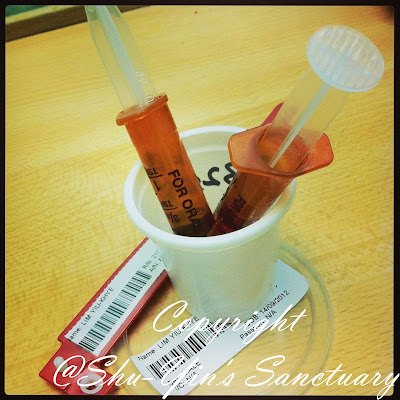 At the time of admission, the nurse puts Khye on the weighing machine and it reads 8.1kg. Wow.

Then another bad news hit us. There Paeds Ward in Island Hospital was so full that there was no more 2-bedded or single bedded room, only 5-bedded room.
Not even the Deluxe VIP room was available.

So we had no choice but to stay in the 5-bedded room. It was such a nightmare I tell you!!!
First of all, we were given the bed just next to the door. Then we had not much space, and you know with a baby, you need so many things within your reach - diapers, water, wipes, bottom balm, hanky, bib, etc.
All we had was a small side table and the movable bar. So all the stuff I put at the bottom of our bed.

Then it was the noise. The kids at the next beds were crying at different times, and even at the same time. One cries, and it triggers the others. But I can't really blame them as my own kid was also crying.
And the nurses kept on going in and out the room to take temperatures, dispatch meds, etc.
So ended up Khye and I didn't have much rest on the first night. 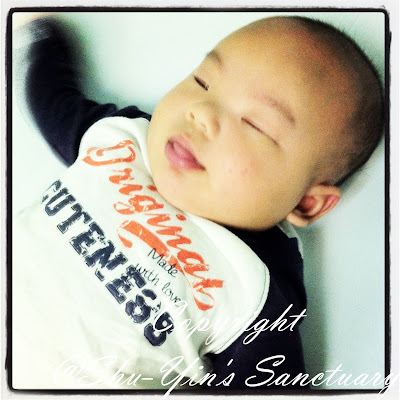 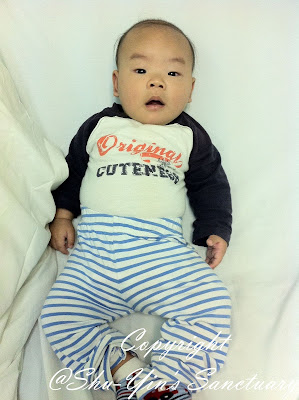 And guess what? 70% of the kids admitted are the same case as Khye, they were all wheezing away. The other 20% are due to high fever, and the 10% is due to other causes.
Wah,,,,so I told mum not to bring Shern here, just in case he got the bug which is everywhere.

Luckily by the next day 5pm, there were some discharges and a single bedded room was available.
This is our room.
It felt like a palace compared to the previous 5-bedded room. I was so happy with the space. 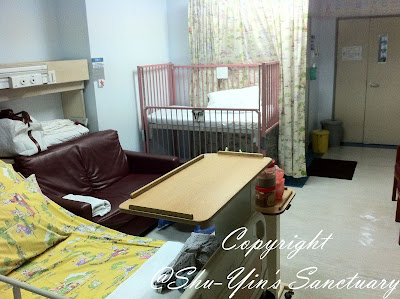 And the best thing is that hubby could stay overnight in the room as a lodger with a surcharge of RM50. Gosh, it was weekend and I needed that extra hands. 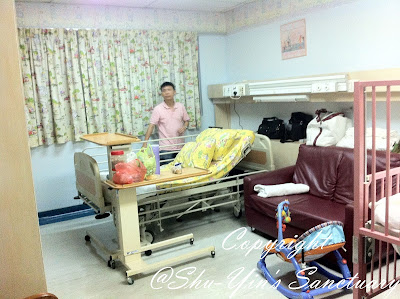 Khye was getting uncomfortable lying down as I think he couldn't breathe properly in that position.
By the 3rd day, I was getting weary and my back was aching with all the carrying of a clingy baby.
Thank goodness for my baby carrier. It certainly helps a lot or I wouldn't have lasted the many days in the hospital carrying my heavy baby. The carrier provided Khye the upright snug position to sleep so that he won't get too uncomfortable with his blocked nose. 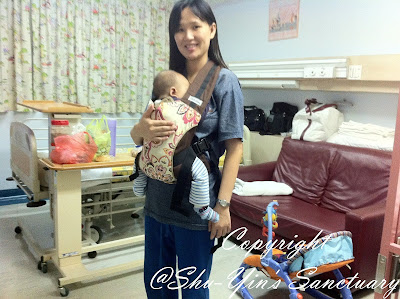 This is where Khye sleeps. I found the baby cot too high for me to put him down, so I just let him sleep with me in the sofa bed. And when hubby sleeps over, he slept on the patient bed. Haha. 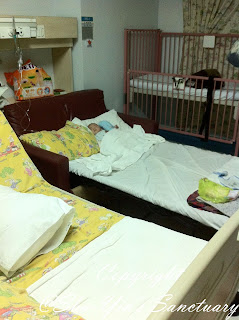 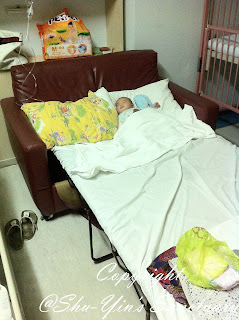 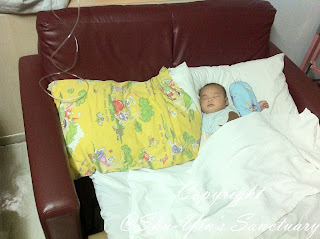 This is me letting Khye inhale in the saline using the nebulizer kit while he was sleeping. Usually he would cough after inhaling for awhile because the vaporized saline inhaled actuallt dissolves the phlegm/mucus and flowed into his throat, making him cough. 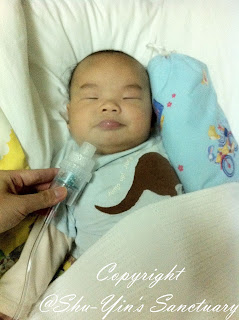 So Khye basically is ok with the use of nebulizer for awhile, but towards the end, when he would be coughing, then he would start fidgeting.

And of course Khye hates the nose/throat suction. Imaging having a thin, soft tube sticking into your nostrils/throat. So Khye would be crying and screaming out loud when the nurses did that to him. The first day admitted, it was done twice. After that, so far, only once a day after the chest pysiotherapy.

Khye loves the chest physiotherapy the most. It is a treatment where the physiotherapist claps Khye's back using a curved palm. Mucus actually flowed out of Khye's nose and Khye actually coughed while the physician was clapping his back. And most of the time, Khye fell asleep in the middle of the session, or he giggled out loud. It must be ticklish or fun. Haha.
But it is just too bad that after every chest physio session, Khye would need to do the nose suction to remove the loosen mucus. So after giggle, Khye would then cried out loud. :(

But overall, Khye is a happy baby.
Even the nurses said 'wah....nose blocked dee, still can smile ahh'.. 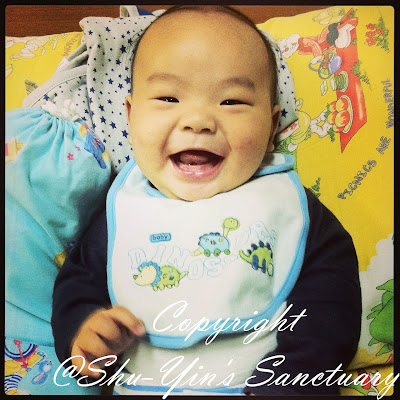 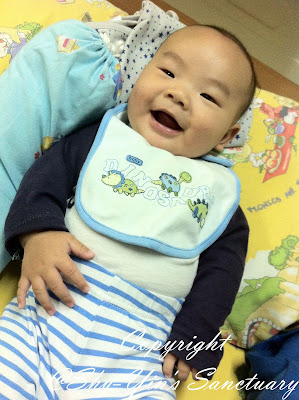 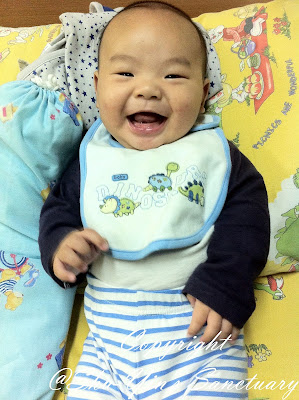 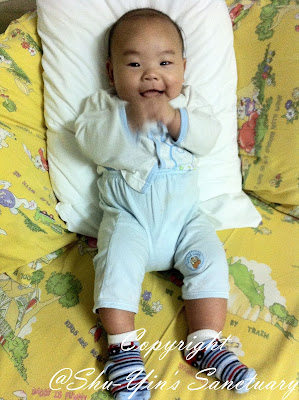 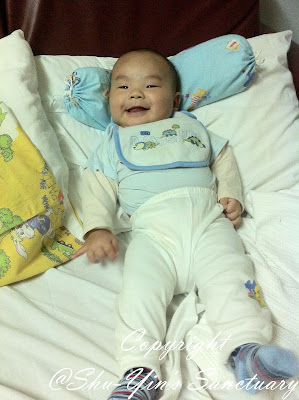 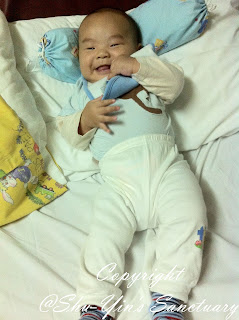 He likes to be propped up these days too. 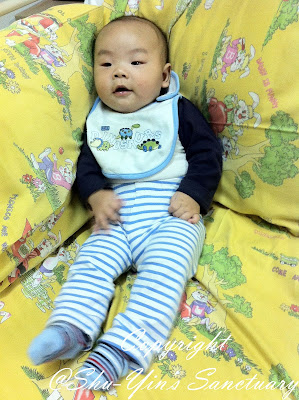 And as usual, during tummy time, he would first suck his fingers, and even his whole fist. 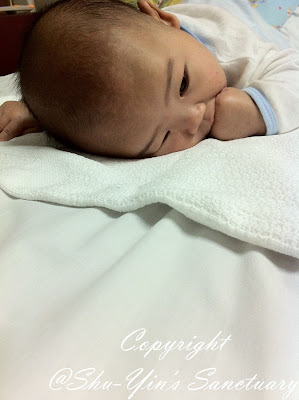 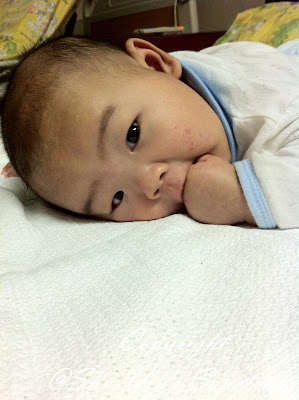 Then he would do some heads-up, finally! ;) 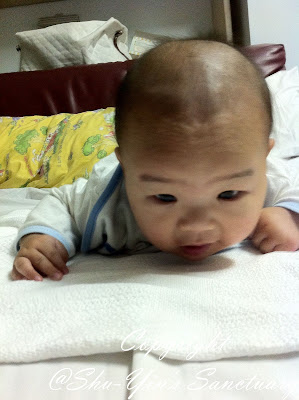 Happy Baby Khye & mummy is still in the hospital. But Khye is getting better now, with very little cough but I could still hear some wheezing sound sometimes when he breathes.
So I'm hoping he could get discharge in a day or two.

Please pray for Khye's speedy recovery, so that both of us can go back to our Home Sweet Home.
I'm missing Shern a lot, have only been talking to him through the phone only.

Just re-read your post again and realised everything was the same for us when Heidi was hospitalised, with the exception of the suction. They almost did it for her but her paed stopped them just in time and said that she didn't need it. But everything else is the same, from the chest physio and baby sleeping with me on the sofa bed rather than in the cot, right up to the shared "dormitory" on the first night (ours was 4-bedded) and I was so glad to change to the single room on the 2nd night. Hopefully Khye is feeling better soon and that Shern (and Hannah too!) won't bring back all the germy germs from school! :p