We decided to send Shern to playschool a few months ago. This is so that he could have other kids to play with and to learn to share and to be more independent.
Was doing research and then finally decided on a playschool that is near to our place. It will be more convenient since he will only be there for a few hours every morning.
Decided to enrol him only in February, so that there will be less new kids and thus, the teachers can pay more attention to him on his first day there.
I was more nervous than him. The night before, I packed his school bag and in it I popped in a water bottle, a snack box and a change of clothes and some diapers. I also cut down his afternoon nap time and tried to make him sleep earlier so that he could wake up early the next morning. He ended up sleeping at around 10.40pm.
I woke him up at 8.15am on school day. Coaxed him to have his milk and changed his clothes. Then off went. He was pretty happy when we told him he is going to school. The many weeks of brainwashing works. Haha. 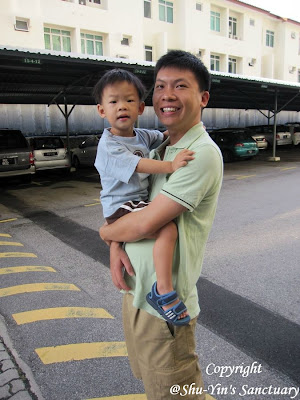 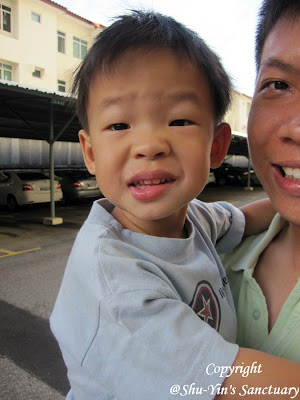 1 February 2012
Reached there at 8.40am and his face lit up when he saw the slides and the playground toys at the school grounds. He immediately went to play. Look at these. No wonder he was so happy! 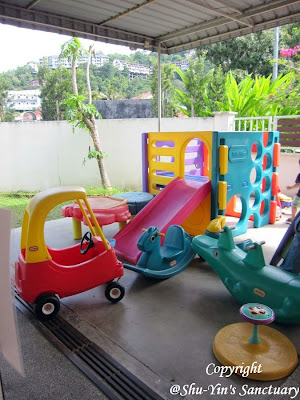 And it was then that I told him 'mummy is leaving now, mummy is going to work'. And guess what he said? He said 'Okay'.
Wah...I was more reluctant to leave him than him missing us! Haha.
But I knew I need to go. So we just took a last peek of him from the gates/wall. Then we were off. 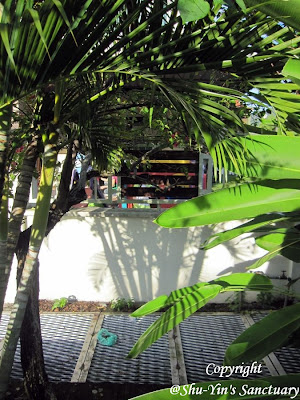 The teacher told us to 'standby' in case there is a crying meltdown. But we didn't receive any phone calls and it was all good until we went to fetch him at 11.30am.
Upon reaching there, I saw his eyes a little red. The teacher told us, a parent went in to fetch another kid and when Shern saw the grownup, he said 'I want mummy'. Luckily, I reached a few minutes later.
But all was well on Shern's first day in school. He told us he played with slides and he kicked a ball and he played with cars and trains. Not sure how true though. And he told us there is an aunty wearing specs, which I think should be one of the teachers or helpers. He doesn't really understand what is a teacher yet! ;)
Second day started off with a little problem - Shern refused to wake up!
He did not even budge when I changed his clothes while he was asleep. Oh no. 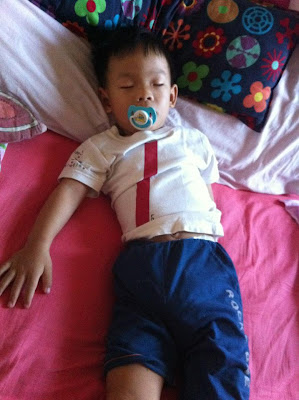 But after awhile, he finally did open his eyes and I told him he is going to school which has slides and bikes for him to ride.
He then insisted on carrying his school bag and he was all hyped up in going to school! 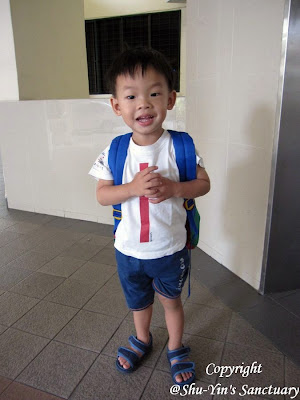 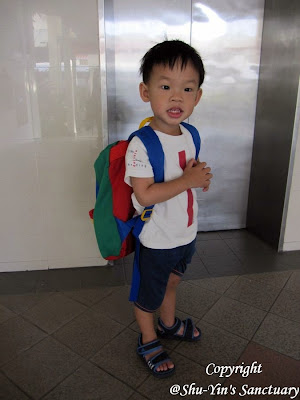 Just like the first day, he was all happy when he saw the slides and bikes. We said bye to him then and he gave me and hubby a kiss each.
We then peeked at him through the gate and saw him kicking a ball with 2 other kids. He seems happy. 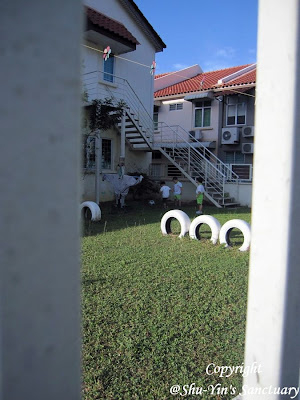 Oh my… another milestone! Your little boy is really growing up! He looks so cute in his little uniform. He is such a trooper for adjusting to the new routine so well. You must be heaps proud of him ^_^

P.S. Is 10.40pm considered ‘early’ bedtime? What time does Shern normally wake up on non-school days?

Serene,
Nope, early bedtime should be 9pm here. But since we got back from South Africa and with CNY, Shern's bedtime routine has been off. So I was hoping to slowly adjust him back to sleep at around 9.30pm.