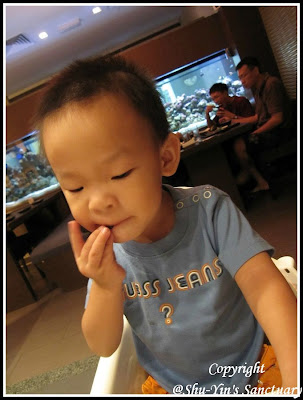 1 October 2011
Car Seat and Stroller
Shern has been an absolute angel in these until now. He sits in his toddler car seat with his seat belt on every time in his daddy's car. And he would asks for his stroller every time we go out. Isn't that amazing? I could hardly believe it myself too.

Potty Training
We have started potty training Shern again, slowly. Now whenever he is doing his poo (I will know when he is doing his big business), I will bring the potty to him. Then I will also bring him his toy cars, telling him he can sit in the potty to poo while playing with his cars. He seems ok with it.
Well, this is the first step. Will think of the next time soon. ;P

Speech
Shern's speech is growing really, really well. He can now voice out different emotions, telling me that 'car-car is sad' whenever he sees a droopy mouth in the cartoon or books.
He also name me many types of animals, which he learns from books, such as 'meerkat' and '

Food
His love towards sushi is still ongoing. He would gobble down 4-5 sushi rice, no problem at all. And he particularly likes Sakae Sushi because of the kiddy meals which are served on very interesting plates such as car, plane, etc.
The photo above was taken at Edo Ichi, one of our favourite Japanese restaurant.

And he is still avoiding fruits. Don't ask me why. One look at any fruits and he runs away.
And he being the MPPP of the house, weird I think. I mean, fruits are sweet and kids are supposed to like them right?

Toys
I now declare my son being a wheels freak. He just loves anything with wheels. Cars, trains, trucks, tractor, he knows them all.
I am convinced he is going to be a wheel expert in the future, maybe owning a Michelin Tyre shop or something.

Shern can tell me most of the cars on the road, be it a Dump Truck, Cement truck, Jeep, Van, Bus, Tractor. He amazes even his own mum, me!

Recent Things
Nothing much happen besides the ordinary happened this month.
Only having tried Candy Floss for his first time and wearing those spectacles that makes him looked so geeky!
Posted by tanshuyin at 12/26/2011 01:03:00 AM