What was supposed to be a mini birthday party became a erm...rather overcrowded party.
Well, we have a big family. With just a few friends, the rest are all family members and relatives.
And we ended up with 40 over people cramming into our little apartment!

What's a birthday without some colourful party deco, right? 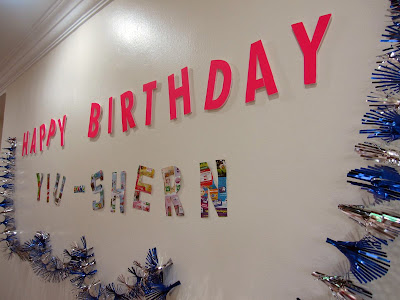 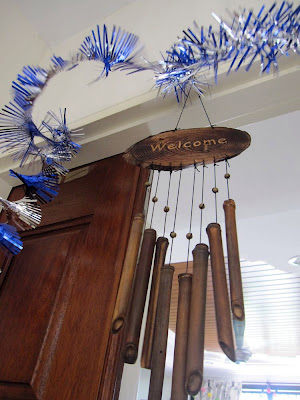 Simple deco which hangs on the front door to let guests know that 'yeap...u reached the correct place!'
I made party packs for kids with their name tags on it. In front of the packs are treats for kids - gummy sweets, M&Ms, Rocky sticks and Hello Panda biscuts in glass bottles. 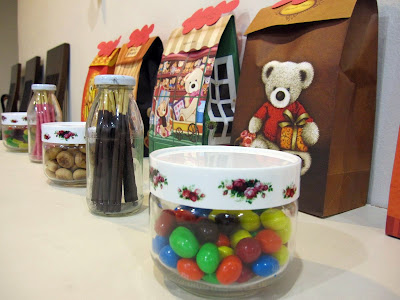 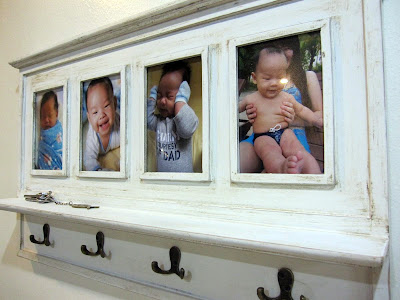 This is what the whole thing looks like! I hope the kids are happy with their party packs. 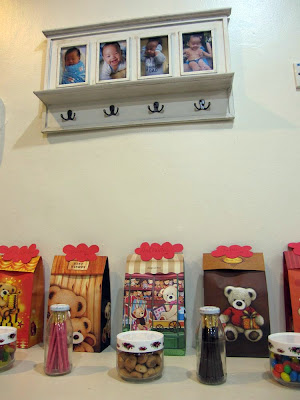 And to mark the occasion according to chinese custom, red eggs are a must! 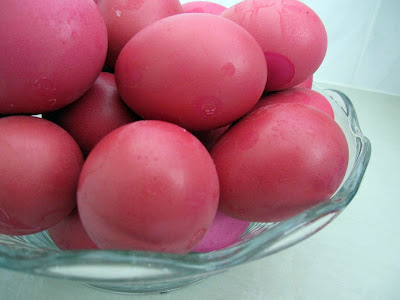 And then there are food of course! Lots and lots of food! 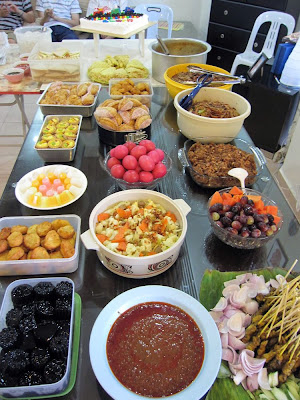 The whole place looks quite festive even with the simple party decorations. And with children's music playing on our mini home theatre system.....it looks like a cheerful kid's party indeed! 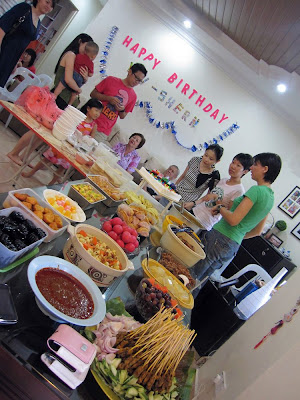 The kids seem to have a good time! Each playing with their own toys. 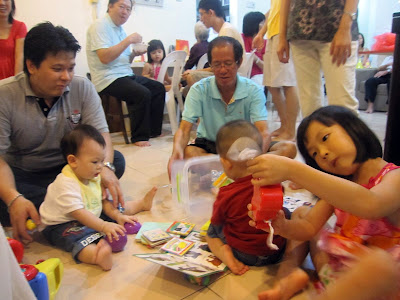 The birthday boy was especially happy that night!
I think he looks gorgeous with his birthday party hat on! Hehe 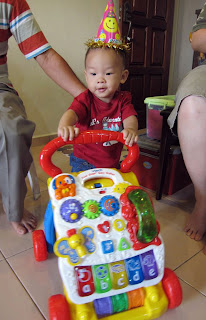 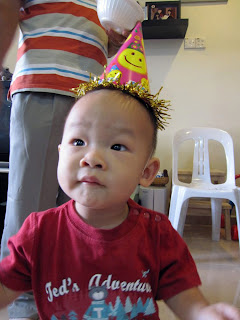 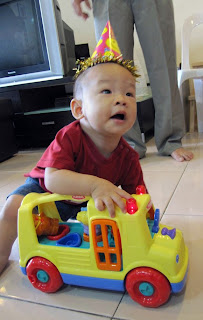 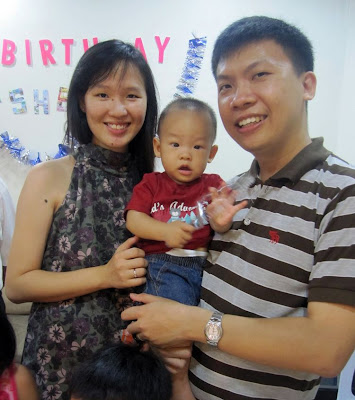 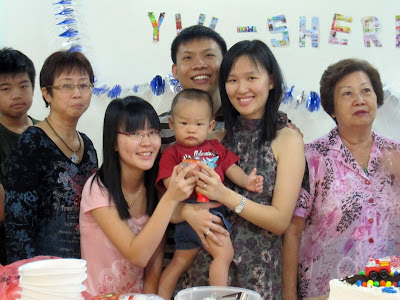 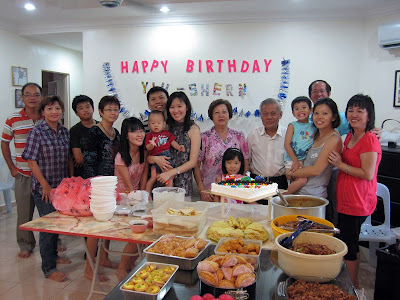 Everyone joining in...except for those who were late! ;P 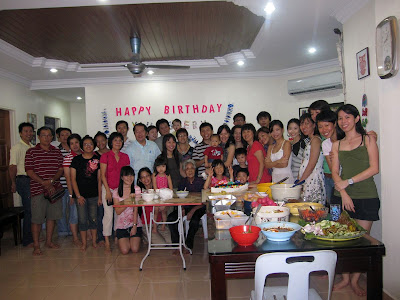 Shern holding on to one of his present and grinning away! 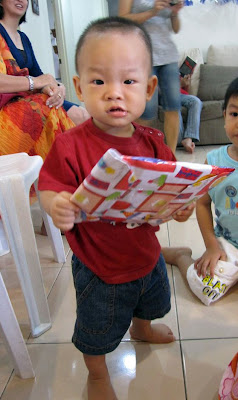 Shern got his first ever bike from Chao-chao who put her hands around his neck and posed for the camera. 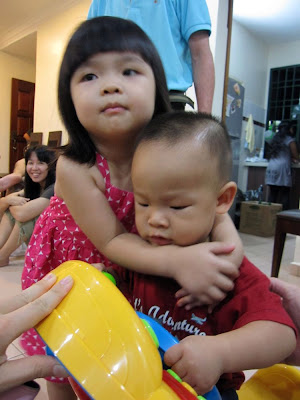 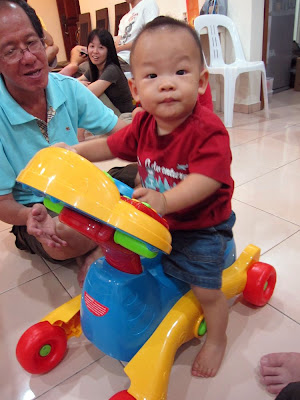 The party ended at around 9.30pm with Shern and waving bye-bye to guests. 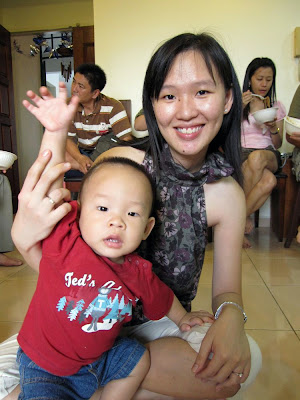 So what happened next?
Opening presents time!!!!!! Look at all the presents Shern received that night. And not to forget some angpows too! 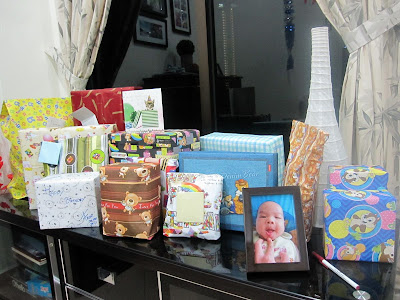 Shern busy playing with all his presents... 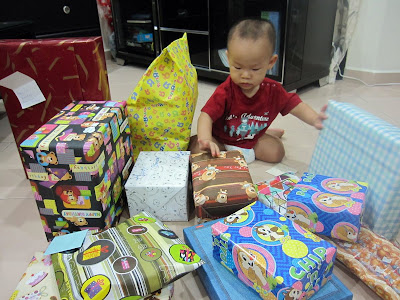 Email ThisBlogThis!Share to TwitterShare to FacebookShare to Pinterest
Labels: 3 of Us, Birthdays, Friends, Lim Yiu-Shern, Relatives and Family, Shern's Firsts

noooooo... that group photo is 'everyone joining in, except those who left early!!!'

hope he likes the gift! =) hehe

he loves the truck....loves to push it along..

good good. there's a refill pack for the blocks. u can go get it for him if the blocks given are insufficient for him to play with. =)

haha...shern seems to love his sampah truck so i must say it is a good choice. muahahaha

wow! you must make sure you keep these photos well. i'm so jealous i missed it all. looks like an awesome party!! would have loved to be there.

shuey...nvm. u juz make sure u come back for shern's NEXT party ;)

shuey...har? means it will be at least another 2 yrs more til i next see u? *pouts

i'll be back in time for shern's 3yr birthday mah... so less than 2yrs. but i was back for such a long time in 2009 and then gonna be back in penang for good, so i taking my time doing whatever i can overseas first. ;-)

shuey,,,u sure boh? back for GOOD? hehe

i've always talked about goin back for good one day, haven't i? it will happen.. :P