I was thanking my lucky stars that the Terrible Two stage has not yet begun for Khye when he was 2 1/2 yrs old.
Khye being the late bloomer experiences none of the terrible two when he was two years old. But I think I spoke too soon.
Now that he is three, Khye has been throwing tantrums and crying for no reason for the past few weeks.

So there was no Terrible Two stage....but progressed into the current Threenager stage!

And today was one of the days. He did not nap after school in mum's house. So when I went over at 6pm for dinner, he was already crying because I switched off his Barney show on tv which he had already been watching for hours!
It took me quite a long time to eventually make him stop crying and to feed him his dinner.

And so Khye was crying away and he refused to get into his carseat. We tried some cajouling and talking to him nicely but he still would not budge. And we starting scolding and threatening him but it did not work also.
So in the end hubby carried Khye and buckled him into his seat while he was struggling and shouting 'no seatbelt' (don't want seatbelt) !

And after much crying he vomitted his dinner out. Sigh. Luckily only his carseat was soiled and not the car.
But stil it was another messy affair, with me taking Khye for a shower and hubby taking out the carseat for a wash.
The cover was sent for washing and we had some hard time removing his vomit from some hard-to-reach crevices in the carseat. 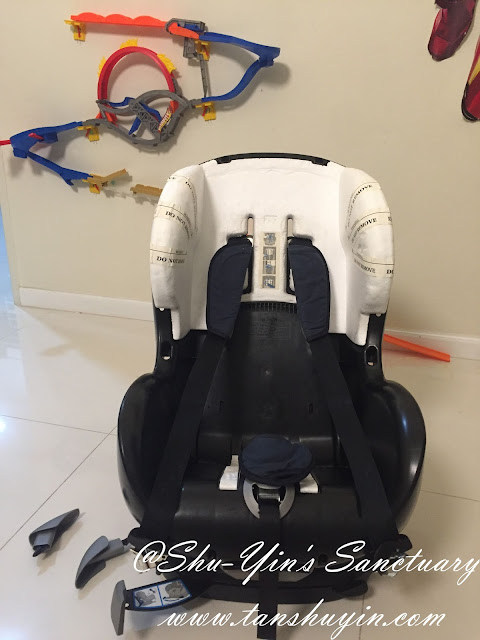 And so this is just one of the episode of Khye being a threenager.
I hope this phase will pass soon. It is not easy dealing with a threenager and a 4-month-old at the same time.