Shern First Time In A Cineplex

It was a very fun and fulfilling Saturday for Shern. We brought Shern to watch his first movie, then swimming time with his cousin, had sushi for dinner together, and then back to cousin's house for some PS3 session. It was a delightful day.

We bought the tickets a few days before as I do not want to end up sitting front row seats, or to disappoint Shern just in case the tickets are all sold out. After that, I told Shern a few days before hand that we are bringing him to the cineplex to watch a new monster cartoon in a big screen. And that got Shern excited!

So we reached there about 12 noon and while hubby queued up to buy some snacks and drinks for us, we went to take some photos with the Monsters Uni props.
It was fun! 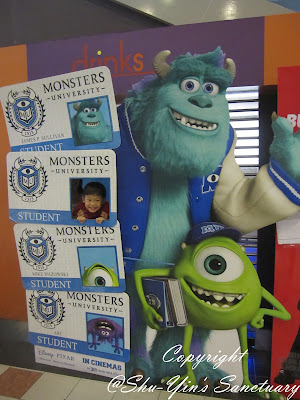 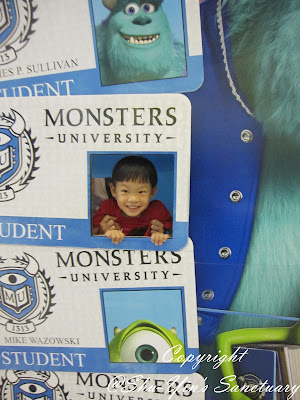 Shern being a Student in Monsters University

Min-yee tagged along too. And this time, she was the student.
Shern standing in front. 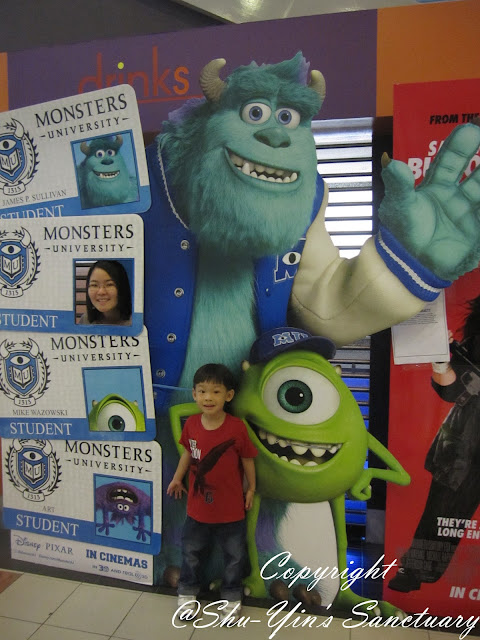 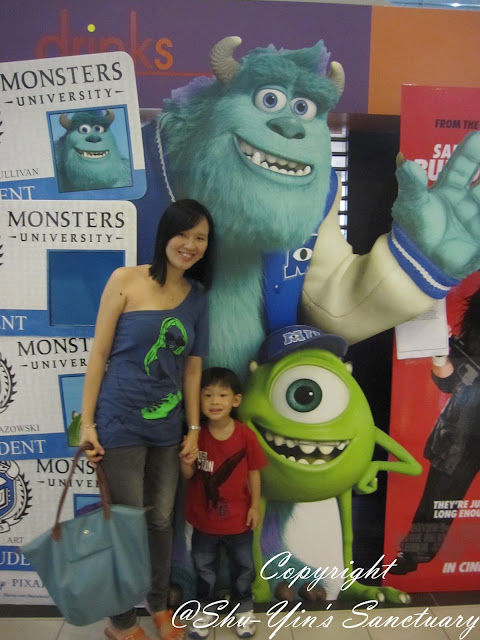 Me and Shern again. 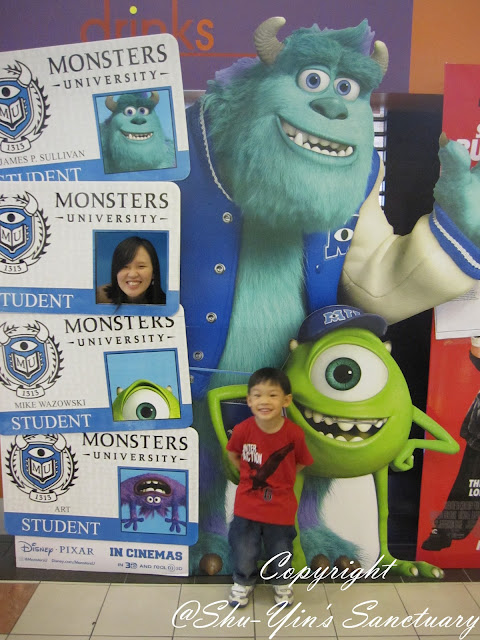 Shern admiring the posters on the wall. 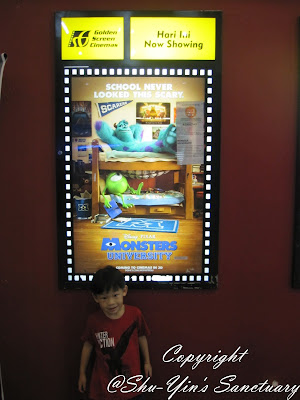 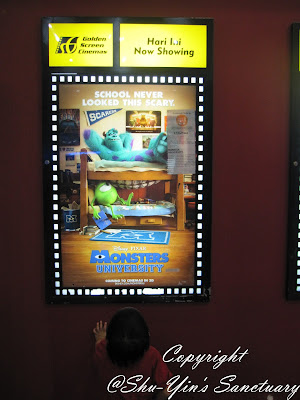 Posing when yee-yee asked him to smile. 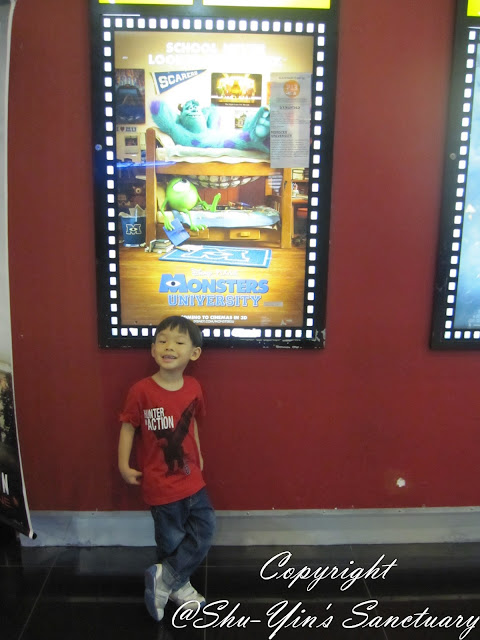 Shern holding the movie tickets. His is with the 'student' stamp on it, so it was RM7. Mine was RM13. So expensive watching movies nowadays, huh?
Anyway, Shern's first movie ticket stub is going into his trinket box where I keep all his stuff. :) 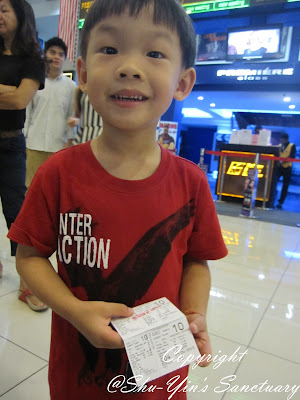 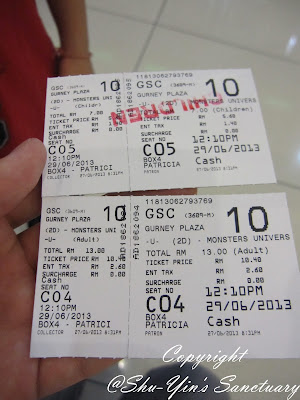 Another photo with all the monsters as we were about to go into our cinehall. 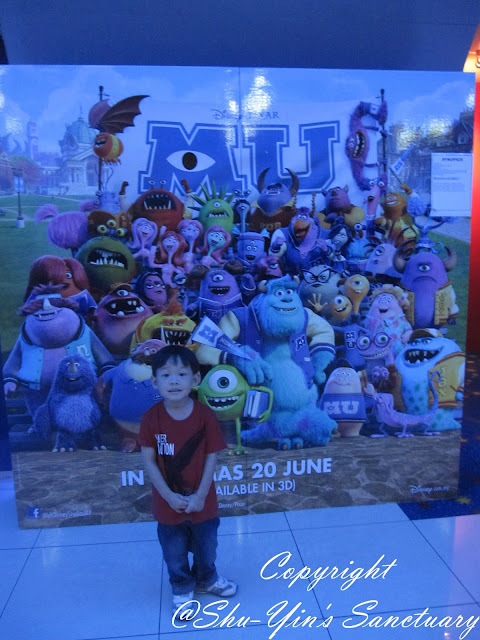 Shern is a little too light for this chair. lol. His chair sometimes liked to fold up by itself if Shern doesn't sit properly. But he was still very very happy.

Half of our cinema hall were kids. Maybe it was the showing time we chose which was a child-friendly time, but it was full of families with kids! 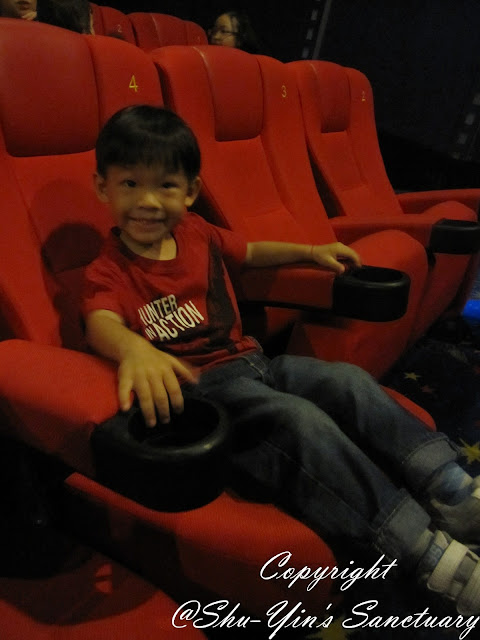 And because I told Shern he cannot talk in the cinema and could only whisper, when he saw the little girl in front of him talking to her mum (before the movie starts), Shern went up to her and said 'shhhh' while putting his finger to his lips. LOL.
He actually did that a few times every time the girl talked, and I was a bit embarrased.

Hubby bought a tub of popcorn to share and for Shern to try. But after 2 bites, he said he didn't like it and didn't want anymore. But he finished his cup of Iced Milo.

So did Shern sit through the whole movie? YES! So he was a really good boy.
He actually sat through the first hour watching the movie intently, and was even laughing when there were funny scenes. But towards the last 1/2 hour, he got a little restless. He didn't say he wanted to go out, but I could see him fidgeting about and couldn't wait for the movie to end.
So I was really glad it was a short movie, only 1 1/2 hour!

And the first thing he did when we left the cinema was to go to the toilet! Hehe.

It was a really good experience for both him and me. Now I know my boy is big enough for movies! Too bad Penang cinemas didn't screen Thomas & Friends Blue Mountain Mystery The Movie that was released earlier this year. Shern would have been glued to his seat the whole time watching that!