A Visit to the Kek Lok Si Temple

Our family from SA has gone home. House is quiet, a bit too peaceful too suddenly. Starting to miss my sis now, knowing that I won't get to see her for at least 2 years. Well, thank goodness there is always facebook and skype and whatsapp.

Anyway, when they were here, we brought them all around Penang Island. One of the places we went together was to Kek Lok Si temple, as it was all lighted up during the CNY month.

We brought both the kids there for their first time!

We decided to go after the Chap Goh Meh as the lights were still on, and there would be less people. We were right, the place was practically empty. A little eerie at certain areas in the temple, so luckily our troop was quite large, if not it would be too lonely to walk by ourselves.
But on the bright side, we had the whole place almost to ourselves, and we got to take nice photos without the usual hoards of people during the CNY when it was all lighted up.

So we decided to see two views. One at daylight without lights on, and the other with all the lights. So reaching there at about 6.45pm was perfect, still with much daylight.

Shern was feeling adventurous (which kid doesn't, huh!) and wanted me to take a photo of him by a ledge. So this is a photo of him, standing at a ledge, luckily it was with railings! 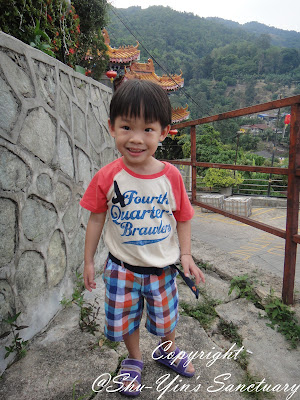 As we walked up the stairs and walkways, little things fascinated Shern. Even the cracks n the wall and the water pipes fascinated him. 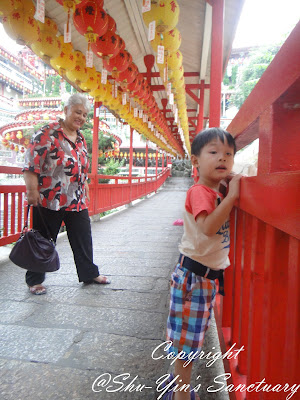 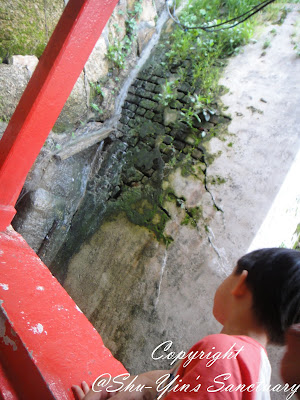 A photo at midway. 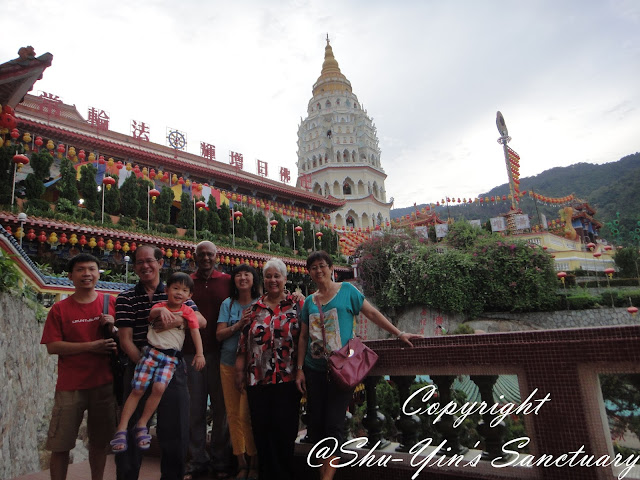 A few of the views on our way up to the Pagoda area. 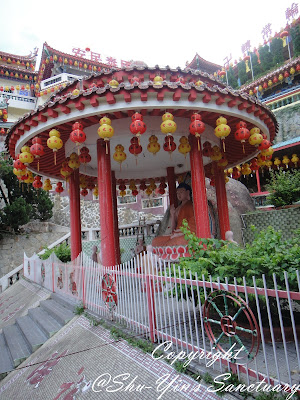 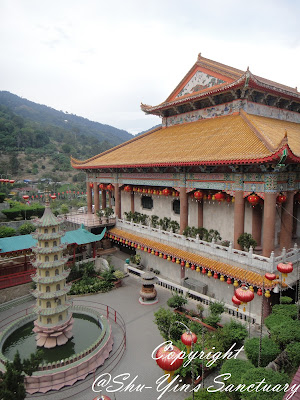 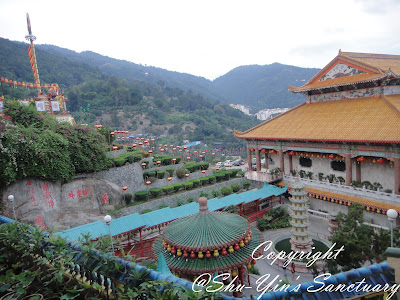 A row of Buddhas. 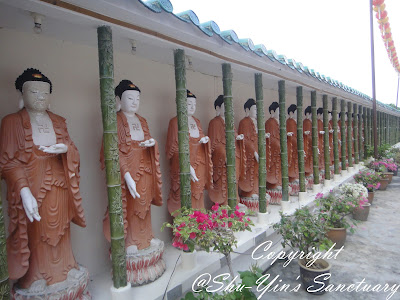 Finally, a group photo of our whole troop.
Khye was busy looking above at the handing lanterns! 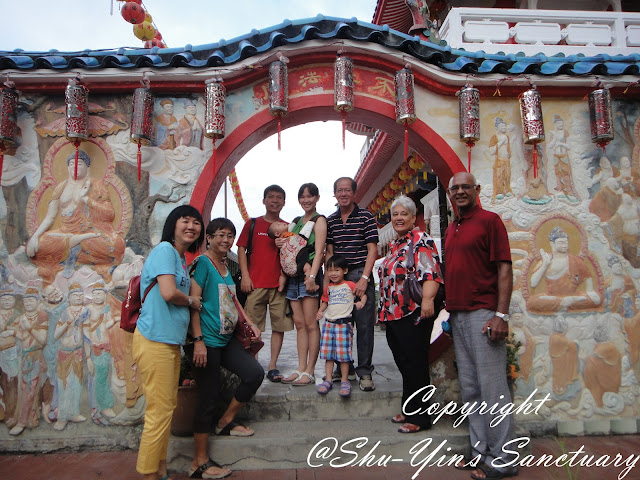 Rows and rows of lanterns hanging at one of the halls. 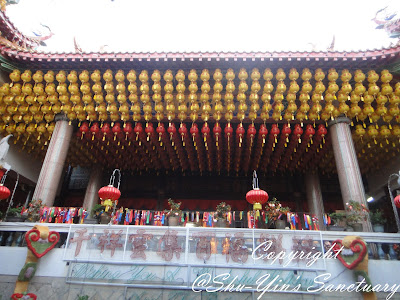 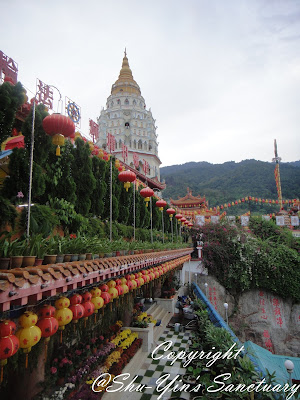 This is the entrance to go up the Pagoda.
I love the lanterns here. 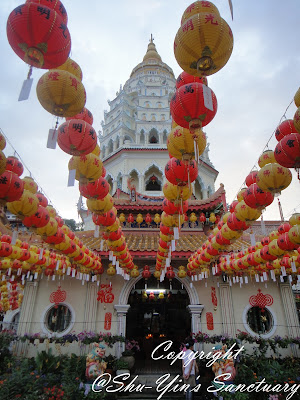 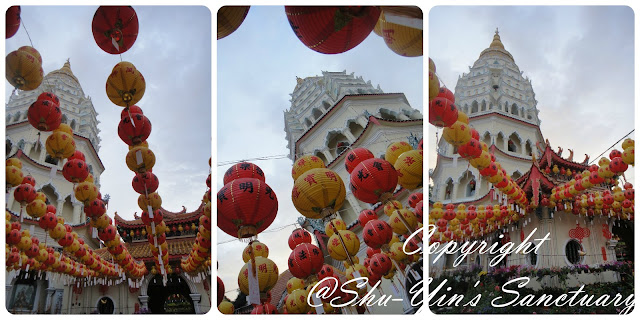 There is an iron cast bell here, which Shern had fun clanking it for three times! 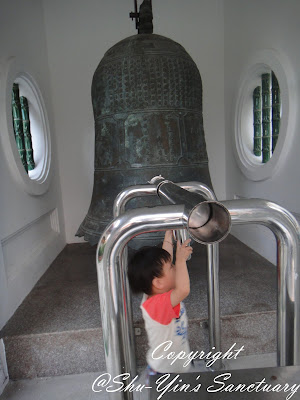 There were a few large turtle statues on the floor, which I found it to be quite dangerous, as it was easy not to notice them (as we were too busy taking photos of the pagoda with the hanging lanterns), and may kicked or tripped over them! 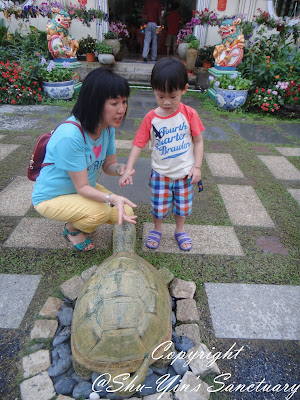 Nearby there was a trail of footpath, and Shern as usual said they were train tracks. Then he insisted we all formed a line as if we were tenders of a train, and we walked in line saying "choo-choo"! He had so much fun there! 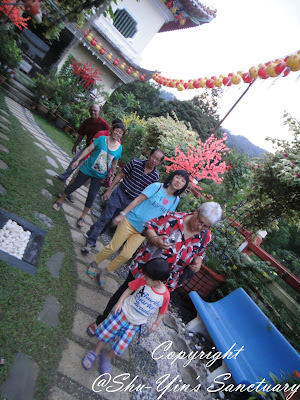 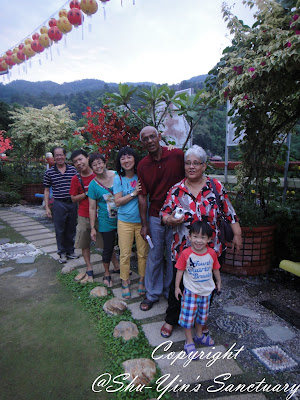 A photo of hubby, Khye & me, as Shern was busy instructing the rest to form a train line! Haha. 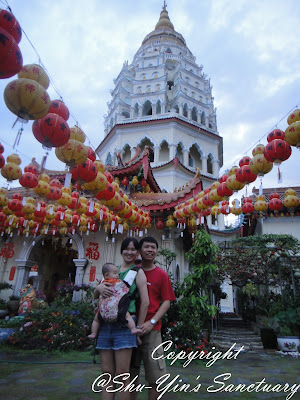 Then at 7.30pm sharp, the whole place was was all lighted up. It was so pretty! As it gets darker, it was even more pretty as the lighted up lanterns and pagoda contrasted more to the dark surreal sky! 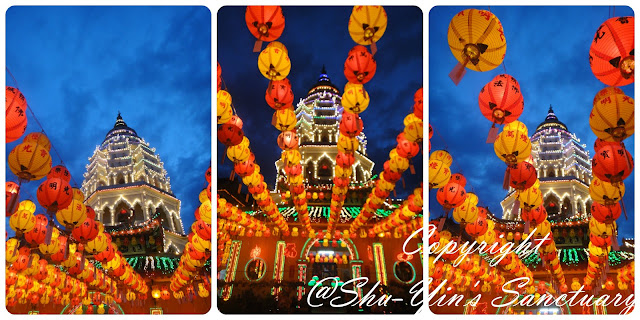 The view below from where we were. 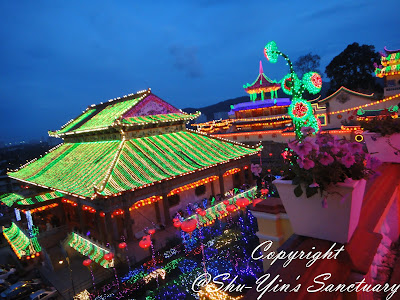 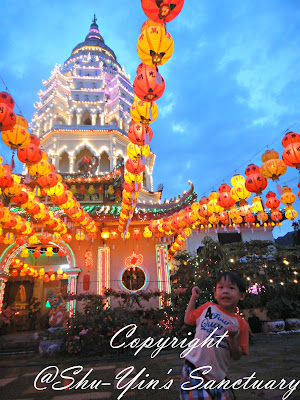 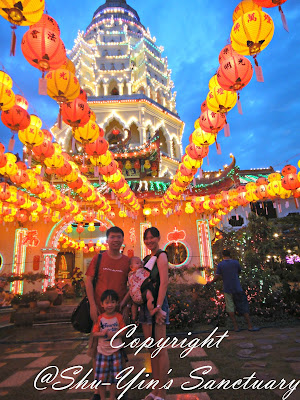 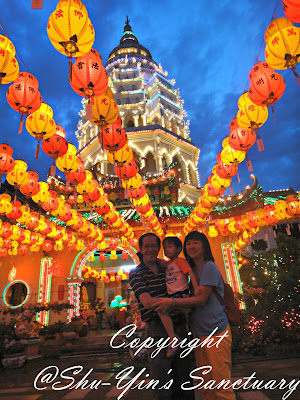 A photo of Shern with Yee-Pho. 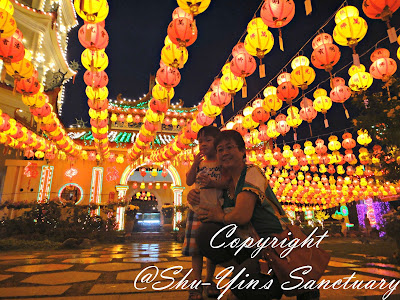 As it gets darker, it was even more pretty. Another photo of the pagoda and the lanterns before we left there. 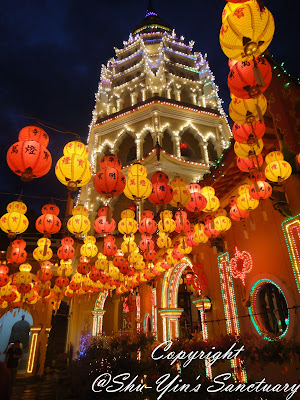 Shern went for another round of clanking the bell just before we left. 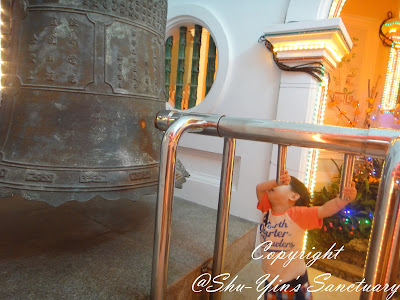 The rows and rows of lanterns we saw just now was so pretty all lighted up! 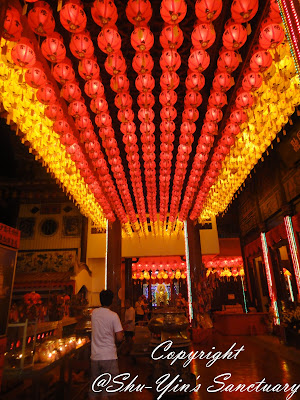 A view of the lighted pagoda from afar! 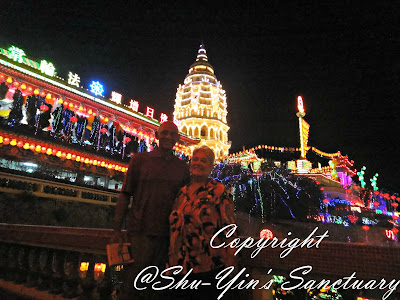 The inclined lift and the Kuan Yin Statue higher up was closed, so we didn't get any further than the Pagoda.


It was a good day for a visit as it was quite a cooling and breezy day. We did not bring the stroller for Khye because the place was not stroller friendly, and it was full of steps. So I just babycarried Khye all the way.
Posted by tanshuyin at 4/07/2013 12:27:00 AM