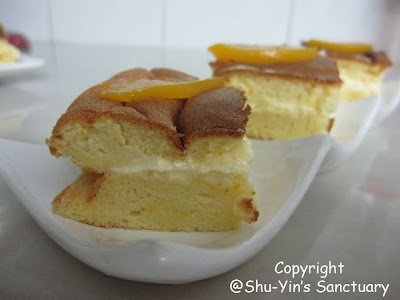 27 February 2011 - Peach Chiffon Slice with Swiss Meringue Buttercream
It was weeks since I last bake. Besides the family favourite orange butter cake I baked for CNY, this is the first bake in the month of February.

This is another recipe from Wendy. Her recipes and beautiful photos in her blog always take my breath away. I just could not keep my hands off her blog. Hehe. This time is her Peach Chiffon Slice she recently posted.

However, my bake kinda failed miserably. First of all, my chiffon cake shrank tremendously. I don't know what I did wrong. Was it that I did not cool the cake upside down? Or maybe I did not fold my egg whites correctly.

Secondly, my chiffon cake did not taste like chiffon cake. It is not airy enough. Mine turned out to be like a light sponge cake.
Anyway, I think egg whites and me are enemies. Whenever a recipe calls for egg whites, I tend to fail. Or maybe chiffon cakes and I are just not meant to be.

But the buttercream recipe was amazing. It tasted so damn good I was licking the whisk all the time while whisking it. It was not too sweet and does not taste icky like other buttercream I have tried. Surprisingly, the buttercream was kind of light.

And that was the reason why I spread a really generous amount of the buttercream onto my Peach Chiffon Slice. The buttercream were actually oozing out from the slice when I cut into it. 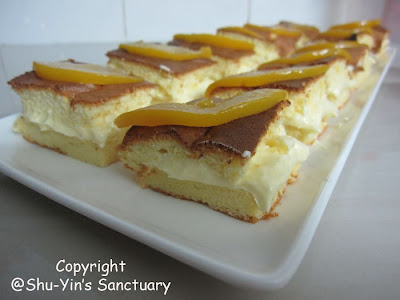 Hubby who is not a fan of cream said it was good too. We both ate 2 slices each although it was already 1am. :) 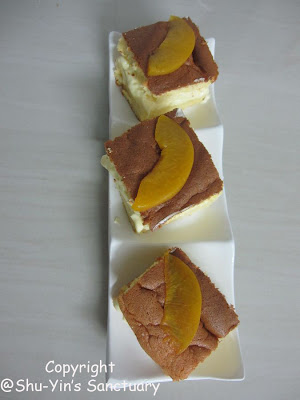 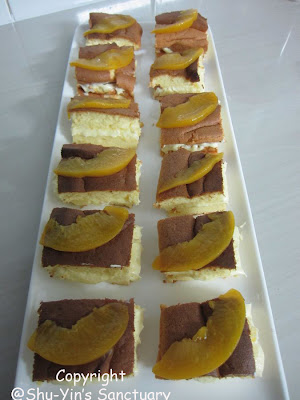 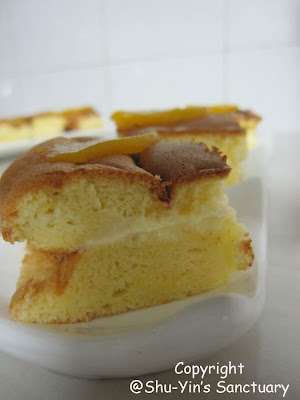 Buttercream for filling (see below for buttercream recipe)

Method
1. Preheat oven at 160/180C. Fully line a 10 inch shallow square pan or a swiss roll pan
2. Combine egg yolks, 20gm sugar and peach puree. Mix until well combined.
3. Put in flour and combine, then oil and combine.
4. In a clean bowl, beat egg whites until frothy.
5. Put in cream of tartar or lemon juice and continue to beat until soft peak.
6. Gradually add in 50gm sugar and beat until stiff
7. Fold ¼ of egg whites into yolk mixture. Repeat with another 1/4 of egg white.
8. Pour (7) into beaten egg whites and fold.
9. Pour batter into prepared pan. Level surface and bake for 30 minutes or until golden and springs back to touch.
10. Leave cake to cool in pan for 5 mins. Remove cake from pan and place on rack. Pull away baking paper from the sides and let cake cool completely on the rack
11. When cake has totally cooled down, cut into half and spread with butter cream. Top with the other half and slice to serve.

Ingredients:
60gm egg white (about 2 large whites)
100gm sugar
170gm unsalted butter (taken out from fridge and cut into 10-12 small pieces just before you start to heat the egg whites)

Method: (instructions are adapted to tropical weather and hand held mixer)
1. Put the sugar and egg whites in a large heatproof bowl over a saucepan of simmering water and whisk constantly, keeping the mixture over the heat, until it feels hot to the touch, about 3 minutes. The sugar should be dissolved, and the mixture will look like marshmallow cream.
(egg whites in buttercreams are safe for consumption once it reaches 65C, to know how much is 65C w/o a thermometer, just mix 250gm ice with 500ml boiling water. Stir the water gently and wait until all ice has melted, then feel the water. It is approximately there)

2. Pour the mixture into a bowl. Put the bowl into a basin of water. The water should feel cold, like tap water on a rainy day. Do not use very cold water. Beat the meringue on medium speed until it cools and forms a thick shiny meringue, about 5 minutes.

3. Now add in add the butter, one tablespoon at a time, beating until smooth. Once all the butter is in, beat in the buttercream on medium-high speed until it is thick and very smooth, 6-10 minutes.

Temperature: If you have a room temperature and humidity like mine, try to add 3-4 pices of ice cubes into the water in step (3) when you add in the butter to prevent the whole mixture's temperature from going too high. The movement of the mixer will heat up the buttercream. Temperature plays an important role whether cream or soup will form. Too cold and the butter can't get fluffy, too hot and you'll get runny soupy cream.

Butter: It must be at 19-23C. Most recipes call for butter to be at room temperature. Yes. But that is non tropical room temperature. Our room temperature can be somewhere 28-37C. So, if you leave your butter to come to our room temperature, failure is not far from grasp. The butter should not be shiny. It should be matte in colour, and you will be able to hold it firmly with your fingers like what you see in the picture and soft enough to be dented thoughout with some pressure.

Shu Yin,
I baked my cake in a 1 inch tall tray. Like a swiss roll pan. Not a tall cake pan. If you bake it more than 2 inches, it'll shrink.
Glad you attempted the Swiss Meringue Buttercream. It's not difficult, if you carefully do each step. And true enough right, it's not icky like store buttercream.

do you bake to sell? it's so mouthwatering but i don't have an oven at home to experiment :P

Wendy...thanks for the advice. So my chiffon shrank tremendously before I baked in the wrong pan. Not that I am jinx with chiffons. Hehe.

Jamie...nah, I dont sell my bakes. Not yet for now at least. Anyway, this chiffon slice kind of a failed bake.
And go buy a portable oven. In penang, can get it for rm300. My oven is also the portable cheap ones. hehe