Now that most of the gang has got kids, we don't meet up so often like before. Gone were the days of mamak supper and ad-hoc meetups.
Now everything gotta plan in advance so that all our toddler kids have sufficient sleep in the hope that they don't go cranky later.
Last Sunday meetup was rare. Almost everyone make it (even those from KL & S'pore) and it was an early CNY meetup. So there, I distributed my first few ang pows and Shern received his first few angpows too. 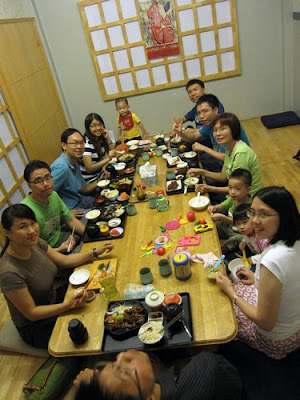 30 Jan 2011 - The Gang @ Matsuki
There were 3 kids there (too bad Yi Jie & Yi Han did not join). 3 of them are age 15 mths, 19 mths and 25 mths. It was so fun and cute seeing them walking about and doing their thing.
Marcus at 25 mths was initially shy. But after he warmed up, he was as cheeky as can be.
Ashley at 15 mths was the princess. She was tall for her age (I guess compared to Shern ;P) and is cute and very manja.
Shern as usual is the active one, running about and even wanted to climb the table before everyone arrived. But all in all, he was still quite a good boy the whole time.
And did I mention that this place is Matsuki @ Cantonment Road and I love the private room. The kids can roam free and I don't have to run after Shern! :)
Posted by tanshuyin at 2/01/2011 01:20:00 PM

Email ThisBlogThis!Share to TwitterShare to FacebookShare to Pinterest
Labels: Friends