I cut down on product reviews a lot.
Main reason is that I just don't have the time to blog about it. #stilllotsofbacklogblogposts
But then I was pretty happy when the agency representative of Thomas & Friends™ in Malaysia contacted me to do a review.
Why? Because all 3 kids of mine are big fans of Thomas & Friends™! 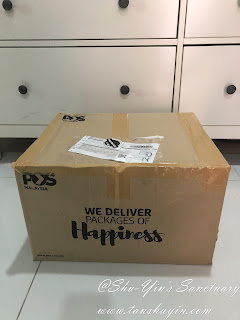 Upon opening it, the whole box set was inside.
I'm glad they used the brown box to cushion it during delivery so the whole original box was in pristine condition. 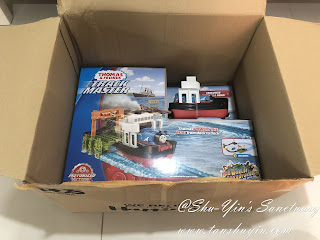 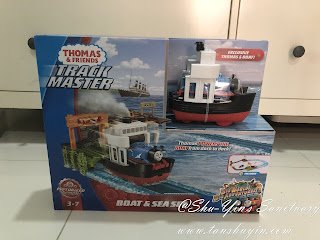 This is the front and back of how the Thomas & Friends™ Trackmaster™ Boat & Sea Set looks like.
The front has clear images and words of the name of the set.
It also states that it is a motirized action set.

Behind it shows the already assembled set, together with a kid, so parents can roughly gauge the size of the set. 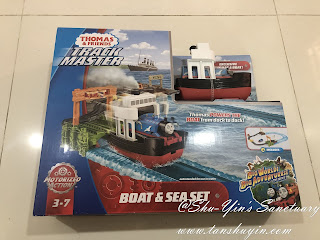 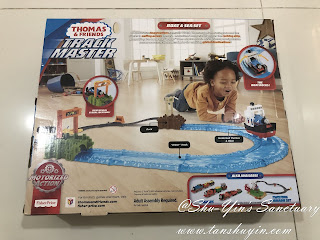 The highlight of the set, which is Thomas the Tank Engine and the rolling boat is strapped firmly on the corner of the set so the kid kinda get to have a peek on what it is. 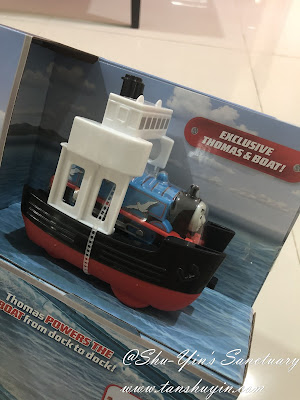 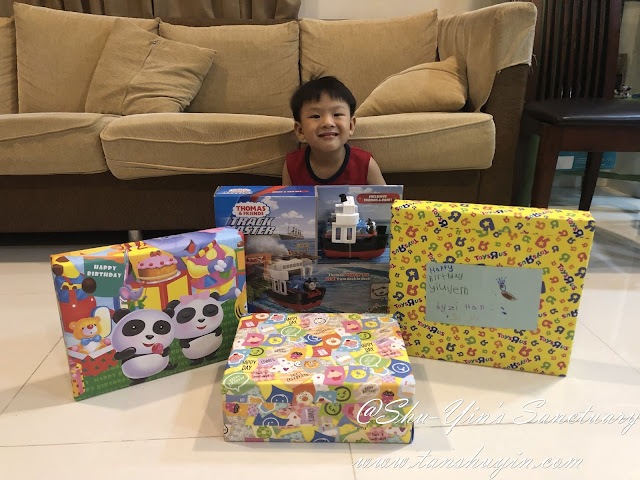 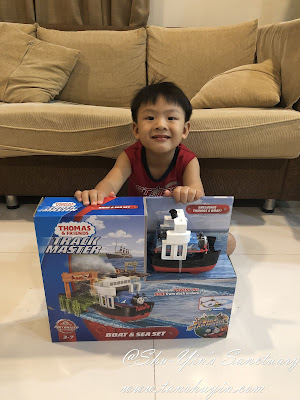 FIXING AND TRYING OUT THE SET

As I mentioned, all my 3 kids are fans of Thomas & Friends™ and so all 3 were also excited to help their brother to fix the set.

I like how everytime we fix a Thomas & Friends™ railway set, my kids get to learn a lot from it.
They would read the instructions together and try to fix it up together. 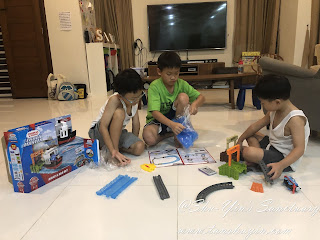 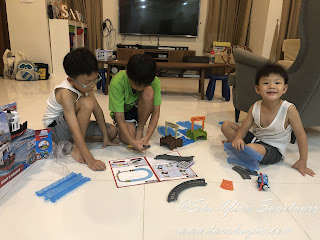 Watch how the big brother Shern let his small brother Vern to help to fix the tracks.

And look at how all three of them were grinning happily when they managed to get it right! 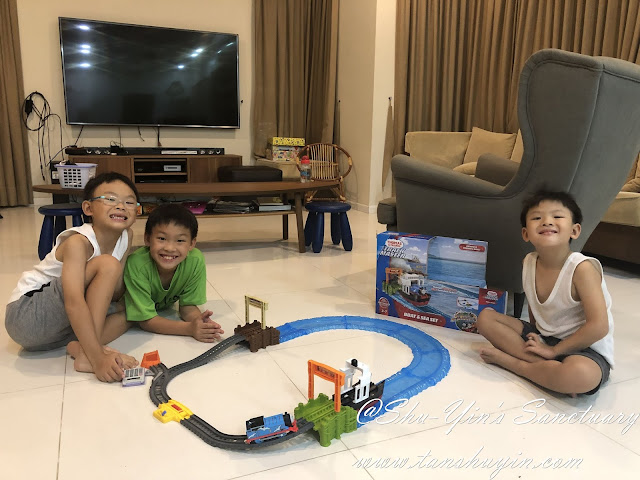 And this is how the whole thing looks like when it is all done. 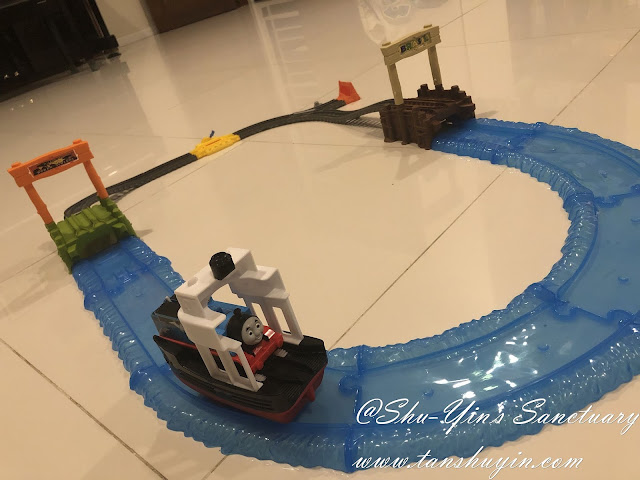 The star of the set, Thomas the Tank Engine on the Rolling Boat. 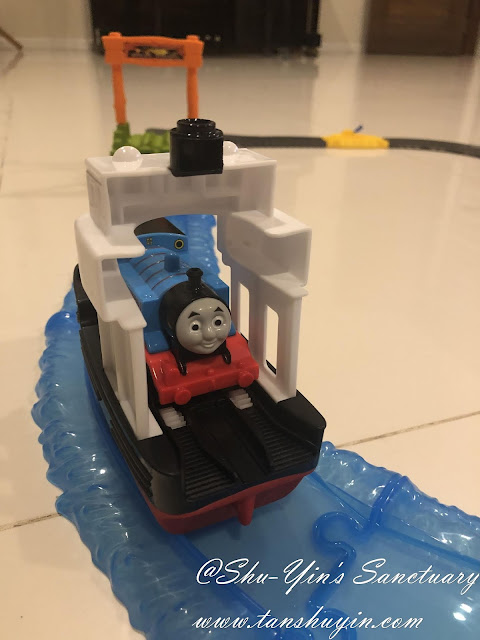 WHAT DO WE THINK ABOUT IT?

First let me tell you all what is this set all about.
This Boat and Sea set is a unique concept launched by Fisher-Price based on this new sea theme.
This set consists of a motorized Thomas the Tank Engine, a Rolling Boat, "Water Tracks" to be used by the boat, and the usual railway tracks and two docks.

What I like is that the Rolling Boat is powered to sail from one dock to the next dock. And like how the original ship sails in the ocean, this Rolling Boat also runs on the to and fro concept.

During play, my kids experience how Thomas the Tank Engine will move from its railway tracks on land onto the floor of the ship and help the Rolling Boat to power to sail across the oceans to different places.

Look at the short clip on how it works.
Love how happy Vern was and how in awe he was with it!

After awhile, Shern and Khye who is 10yo and almost 7yo got bored with it. They only got excited while helping to fix the set.
So I guess this set is more suitable for younger kids from probably 3-6+yo.

But Vern on the other hand was fixated with it for quite some time.
He did not get bored watching the train goes round and round.
I guess he did not get bored because he had a play in it as he needs to transfer the Rolling Boat from one dock to the other.

But me on the other hand prefers to buy my kids non-motorized toys. Because I want them to roll the trains on the tracks themselves to improve their motor skills and to let their imagination runs wild while making up stories as they play.

But maybe because I don't buy them motorized toys, Vern is very fascinated with it and was exclaiming "wahhhh...whoah...as he watches the train goes round the tracks and onto the boat and the water tracks! :) 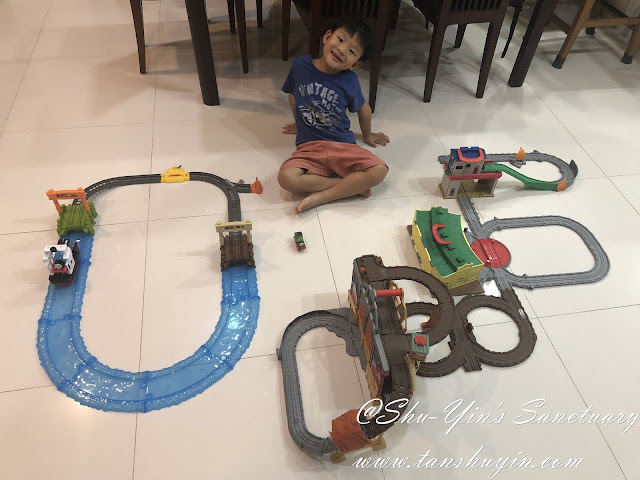 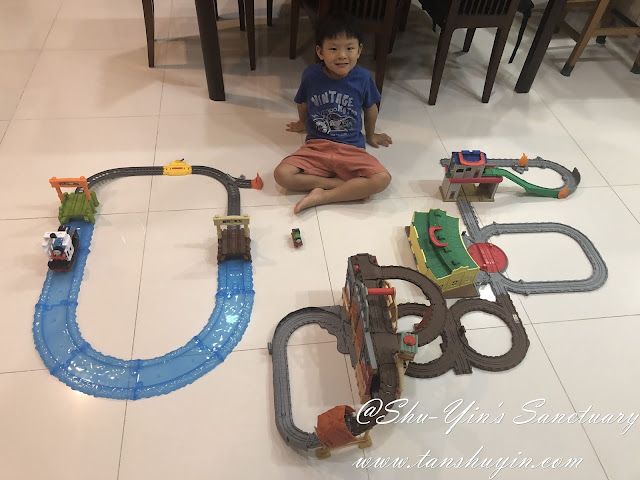 Thomas & Friends™ TrackMaster™ Boat and Sea Set can be found in all major malls and Toys 'R' Us nationwide.
For more information, please view www.facebook.com/sea.thomasandfriends

* Disclosure: I received the Thomas & Friends™ TrackMaster™ Boat and Sea Set mentioned above for review purpose, but no monetary incentive was received. All text and opinions are of my own and represents my honest opinion of the product(s).

Its nice how it turns from boat to train.
Cheap Tickets
Discount Tickets

DO YOU NEED A LOAN?
We are a financial consultants that handles international finances for any amount of banking instruments. What about finding a reputable Debt Consolidation firm that can assist you in reducing monthly installment so that you will have affordable repayment options as well as room to breathe when it comes to the end of the month and bills need to get paid? Mr Steve Wilson Loan Firm (stevewilsonloanfirm@gmail.com) is the answer. Reduce your payments to ease the strain on your monthly expenses. Feel free to engage our leased facilities as We have provided over $2 Billion in business loans to over 25, 000 business owners just like you. We use our own designated risk technology to provide you with the right business loan so you can grow your business. Our services are fast and reliable, loans are approved within 24 hours of successful application. Whatsapp:+16673078785

We offer loans from a minimum range of $5,000 to a maximum of $500 million, STEVE WILSON LOAN FIRM Will give you loan with an affordable interest rate of 2% and loan duration of 1 to 30 years to pay back the loan (secure and unsecured). Our aim is to provide Excellent Professional Financial Services. Intermediaries/Consultants/Brokers are welcome to bring their clients and are 100% protected. In complete confidence, we will work together for the benefits of all parties involved. Do not keep your financial problems to yourself in order for you not to be debt master or financial stress up, which is why you must contact us quickly for a solution to your financial problems. It will be a great joy to us when you are financially stable
Email us via:


We are certified and offer fast and reliable services

I'm 40 years old female I tested genital herpes (HSV1-2) positive in 2016. I was having bad outbreaks. EXTREMELY PAINFUL. I have try different kinds of drugs and treatment by the medical doctors all to know was avail. Six months ago I was desperately online searching for a helpful remedies for genital herpes (HSV1-2) cure, which I come across some helpful remedies on how DR.WEALTHY have help so many people in curing genital herpes (HSV1-2) with the help of herbal treatment because I too believe there is someone somewhere in the world who can cure herpes completely. At of the past 2 months, however, I've been following his herpes protocol and it stopped all outbreaks completely! To my greatest surprise I was cured completely by following the protocol of his herbal medicine . Don't be discouraged by the medical doctors. There is a cure for HSV with the help of herbs and roots by a herbalist Dr call DR.WEALTHY he is so kind and truthful with his herbal treatment, kindly contact him for more information Via wealthylovespell@gmail.com or WhatsApp DR on +2348105150446 or visit his website https://wealthylovespell.blogspot.com.
You will be lucky as I am today if you have the courage to contact him and listen to his instruction.

Do you need Finance? Are you looking for Finance? Are you looking for finance to enlarge your business? We help individuals and companies to obtain finance for business expanding and to setup a new business ranging any amount. Get finance at affordable interest rate of 3%, Do you need this finance for business and to clear your bills? Then send us an email now for more information contact us now via (financialserviceoffer876@gmail.com) whats-App +918929509036 Dr James Eric Finance Pvt Ltd Thanks

Email:Creditcards.atm@gmail.com
WhatsApp:+1(305) 330-3282
-hack into any kind of phone
_Increase Credit Scores
_western union, bitcoin and money gram hacking
_criminal records deletion
_BLANK ATM/CREDIT CARDS
_Hacking of phones(that of your spouse, boss, friends, and see whatever is being discussed behind your back)
_Security system hacking...and so much more. Contact THEM now and get whatever you want at