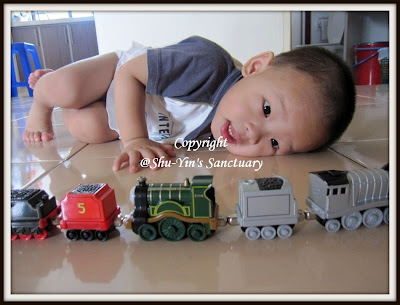 Toys
Shern is still very much into his toy vehicles. He can name most of the vehicles on the road: car, taxi, tractor, lorry, cement truck, fire engine truck, ambulance, police car, and even cranes on construction sites.
His vehicles collection is growing rather too rapidly that we don't have much space for them!

And needless to say, he knows almost all of the vehicles of Thomas and Friends. He can tell you which is Thomas, James, Annie and Clarabel, Harold, Duck, etc. And he can also differentiate between Thomas, Edward and Gordon. All three of them are blue in colour but he knows which is which by looking at their facial expressions. All of us at home and are in awe of him for this.

Physical Strength
Shern is getting really strong. When he kicks, he can kick real hard. And he can jump now as opposed to a few months ago when jump to him means tip-toe-ing his feet!

Speech
Speech-wise he is doing really well now. Although he is a late talker, calling mummy and daddy only at 20 months, his speech development is growing at a rapid rate now. Once he found that he could roll his tongue, he has been following what we are talking.

Yeah, we have to really watch what we are saying. Shern is listening to every single word we say and parrot-ing us!

And he is now able to join words to try to form sentences. Talk about rapid speech development! Of course he dropped all the 'is', 'are', 'with' etc. But he can really make himself understood.

While we were sitting as passenger behind the car, the car jolted due to a road bump.
Shern: Daddy drive scared-scared.
(he is trying to tell us, daddy driving made him scared)

It was hilarious really!

Food
Shern is like the MPPP of the house. He wants to eat what we are eating. And that includes hokkien mee and char koay teow. Yes, he is not afraid of chilli. After slurping them, he will say 'a bit spicy' and then drink his water. And after that he will say 'aiiii', which means he wants more!

Of course, hokkien mee and char koay teow is not his main meal. He just slurps a little of what we give him. He has his own bowl of non-spicy rice or noodles.
I am not the particular mum that makes sure my son eats only wholemeal bread or brown rice and nothing else. Of course they are good stuff and I'll be real happy if he eats them. But just that I don't mind Shern slurping a few mouthful of sinful stuff such as char koay teow.
After all, Shern is already eating all my homemade bakes. Those are already sinful stuff right?

But I put my stand on some food. No sweets for Shern (unless my MIL gives him some once a week when he goes to visit) and no soft drinks!

And one thing though, you can't catch Shern near any fruits. For some reason, he has now decided that fruits are not for him. He spits out whatever fruits I gave him, be it apple, grapes, oranges, peaches, bananas, watermelon. Sigh. Lucky for me, he poos alright. Actually, he poos 2-3 times a day!

Milk
Shern drinks 5-6oz of Anmum Essential 3+ every morning when he opens his eyes. And then once or twice during the day, usually before or after nap. And another 5-6oz before he sleeps. And no, he doesn't drink any milk in the middle of the night (thank goodness).

And when we go out, I don't take with me formula powder, hot water, bottle, etc if it is just the mall or somewhere just a few hours. Maybe because he eats everything, so it is usually no problem to find food for him outside, usually bread or rice or just noodles. He gobbles everything.

I only lug out the formula powder, hot water, bottle with me if we go out the whole day (very seldom) or if we go to MIL's house.

Shopping
Shern loves going kai-kai. He loves to sit car, because it means going out. But to our exasperation, at malls, Shern refused to walk most of the time. When we try to put him down, he will lift up his legs quickly and say 'mai walk'!

On rare occasions, in order to persuade him to walk, we gave him a hat in Forever 21 and he had a good time playing with the hat! 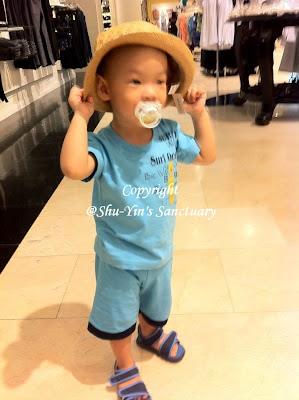 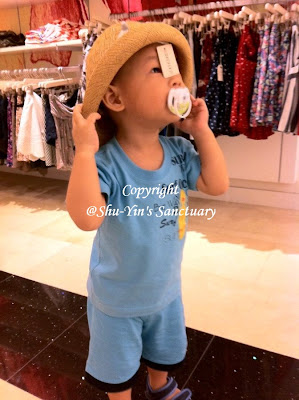 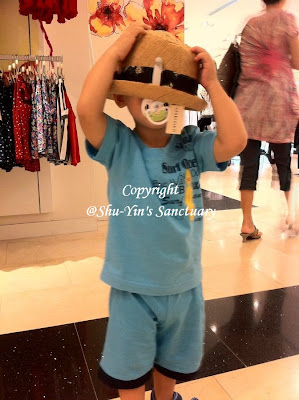 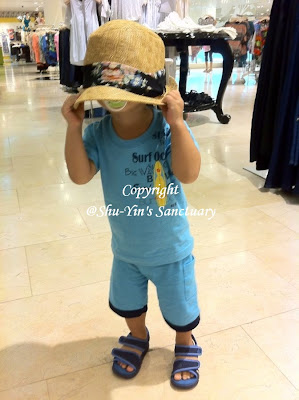 Character
Shern is really naughty nowadays. He purposely disobey us and does what we tell him not to do. So that was the reason I bought a cane at the Chowrasta Market 2 weeks ago. I have not used it yet, but I know someday I will.

I am not someone who is fond of using the cane to discipline my child. Me, myself was not caned often during young. But Shern really is testing my patience. He can be real obstinate at times. And I am already considered a very patient person. I always try my best to persuade him and explain things to him, rather than force him. Well, we'll see how long 'til I use the cane.

Sharing
Shern does not know how to share. He thinks that sharing means one-way; him lending his things to other people. He cannot understand that people can lend him their things too.

And maybe he got scared during his birthday party because without giving him notice and time, he suddenly has got to share his toys with so many other kids. So now, he has a phobia on the word 'share'. He always replies with 'mai share'.
But if I dont use the word 'share' but instead I say 'can mummy play with it?' (instead of can share this with mummy?'), he is ok with it!
So I really have got to teach him about sharing.

Sleep
Shern now sleep at around 9.30pm or 10.00pm to about 8.00-8.30am, which is about 10 hours+ of a good night sleep. We don't have to carry him to sleep anymore, but just need one of us to lie down next to him until he falls asleep. He will usually toss and turn until he falls asleep, which is usually 5-15 minutes later.

And now, he usually sleeps through the night.

Wow...amazed that Shern can string up words already :)

And about the stroller thingy, it is not true. We always bring Caleb out when he was small and he will sit through in the whole journey. Once he knows how to walk, he dont want to sit on it anymore. He will wail, scream, kick, squirm just want to get out. Haaaiiii....

And now we seldom bring him out for shopping anymore....because he will run everywhere like 'siau lang' and bump into everything!

oohh...so caleb now also dont wanna sit in stroller?
i dunno which is worse...running around in the mall, or asked to be carried all the time.
I tell u, my back is breaking for carrying him so long. the thing is, he only wants me to carry him, no one else!

how many mths is caleb now btw?

oohh..so caleb is only 1 mth younger than shern. almost same age then!

how is his speech development? talking good?